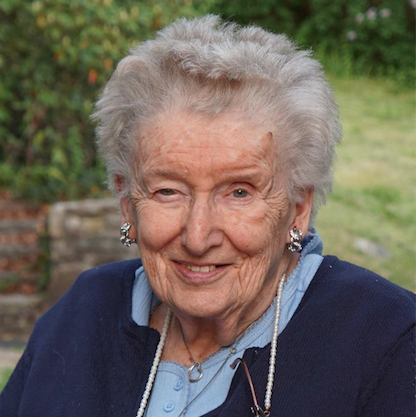 Jennifer L. Moe, beloved mother, grandmother, great-grandmother, sister, aunt, and dear friend to so many, died on Nov. 1 in Stamford Hospital, surrounded by her adoring family. She was 90 years old. 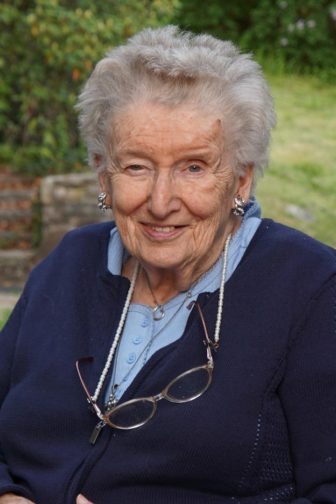 Jennifer was known as Jenny by family and friends alike until she became a grandmother. After that, she was Nana to all. To her grandchildren, of course, but spontaneously, to everyone else as well; her children, her friends, her neighbors and casual acquaintances, even the occasional postman and waitress would call her Nana. It was as if her joy and perfect suitability to that role was so compelling, that the rest of the world could not fail to recognize, pay tribute and hope to be included in the relationship.

Jennifer was born in London to Arthur and Eleanore de Hauteville Bell on Sept. 23, 1929. Her parents were divorced and her mother married Erling D. Naess. In 1940, during World War II, Jenny traveled by convoy with her mother, grandmother and brother, Michael, to the United States.

During that journey, she vividly remembered seeing one of the ships in the convoy struck by a torpedo and sinking before any of the crew or passengers could escape. Her voyage ended in Boston, where Jenny encountered both American accents and corn served on the cob for the first time. She was equally baffled by each.

Her family settled in New Jersey where she attended Short Hills Country Day School and then Kent Place School from which she graduated in 1947. She enrolled at St. Joseph’s Business College in Bennington, Vermont and upon graduation moved to New York where she worked for her step-father’s shipping company, Naess Shipping.

It was there that she met her future husband, Erik Moe. They married in 1955 and had three children, Becki, Rick and Anne-Lise. She and Erik were divorced in 1973.

Jenny’s prodigious energy, her commitment to her community and the variety and depth of her interests are reflected in the extensive list of local organizations and charities at which she worked and volunteered: ABC House; NC Board of Education; Democratic Town Committee; The Norfolk State College Program; West School PTA; the YMCA; the Girl Scouts; the New Canaan Sewing Group; St. Mark’s Choir, Sunday School and Vestry; and Planned Parenthood.

She was very active in the Democratic Party during the 1970s and attended the 1976 Presidential Convention as a Carter Delegate. Jenny was an owner and proprietor of The Basket Tree, a gift shop during the late 1970s and early ’80s and also a favorite counselor at the Diet Center in Stamford. She was a devoted member of St. Luke’s Parish in Darien where she served as Caring Connections coordinator.

Beginning in 1942, Jenny spent her summers in Point O’ Woods, a small enclave on Fire Island. Jenny arrived that first summer at the beach as a young teenager with her family. Nana arrived to spend her last summer in 2019, surrounded by her extended family; three children, six grandchildren and the newest arrival, great-grandson, Noah.

Needless to say, Jenny excelled at it. She cajoled and comforted the nervous homeowners into rental agreements and sales, shepherded the first-time renters through the maze of odd customs and requirements of the community and extolled —with a straight face — the virtues of sometimes shabby, uninsulated, hundred-year-old cottages that tended to lack indoor showers, dishwashers and any degree of privacy.

Jenny had slowed down over the last 10 years but was a frequent and welcome sight along the pathways, traveling with her cane or on her electric scooter. She held court on the screened-in porch of the bungalow she purchased in 1975.

Her radiant charm drew even the most casual passerby or beachgoer onto the porch to enjoy her warmth and company. Often it was standing room only. She spoke in a quiet rasp during those last years but never had trouble being heard. The group would go still and lean in for Nana’s sage advice or gentle wit.