Tropical Storm Henri brought some expected flooding to Darien, but with a right turn it ended up a bit farther from here, so wind and rain are well under the worst scenarios that meteorologists said were possible.

“The storm is still expected to bring us bands of heavy rain and winds of 15 to 25 mph with gusts up to 35 mph this afternoon. Coastal, river and stream flooding and power outages from downed trees should be expected,” Stevenson said in the message.

Good afternoon, this is First Selectman Jayme Stevenson with an update on Tropical Storm Henri for Sunday, Aug. 22, at 1 p.m.

Some good news for the Town of Darien…the path of Tropical Storm Henri shifted east this morning and made landfall at Stonington, Connecticut at 12:10 p.m.

The storm is still expected to bring us bands of heavy rain and winds of 15 to 25 mph with gusts up to 35 mph this afternoon. Coastal, river and stream flooding and power outages from downed trees should be expected. 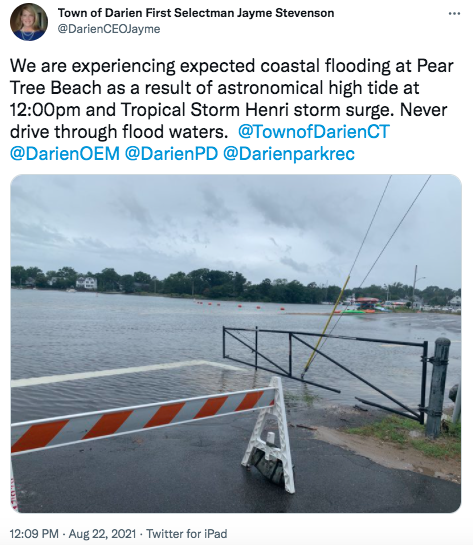 The combination of storm surge and an astronomical high tide at 12:00pm today, caused the expected coastal flooding in areas that typically flood.

While we appear to have been spared the brunt of Storm Henri, as a reminder, during periods of high winds and heavy rain, it is extremely dangerous to be on the roads with the combined risks of flash flooding and falling trees and power lines.

Never approach or walk under or over downed power lines as they may be fully energized. Do not drive through flooded roadways. The water may be much deeper than it appears or road conditions below the flood waters may
have been compromised.

911 should be used for life safety emergencies only. To report non-life threatening downed trees and power lines, please call the Darien Police non-emergency number at (203)662-5300.

Future communications will be on an as-needed basis.

Eversource says the gusts and rain from Hurricane Henri will cause power outages in some places, and an emergency message from the town reminded residents Saturday night that Darien could easily be one of them.

The National Weather Service downgraded Henri from a hurricane to a tropical storm, and winds may not be as bad as initially feared, the NWS announced early Sunday morning.

In an 8:22 a.m. tweet, the NWS said: “Gusty winds and heavy rain continue through the morning and afternoon. With several more inches of rainfall expected, flooding will continue to be a concern.”

“Flood prone areas should be prepared for rainfall and flood conditions similar to or greater than what we experienced on July 9,” the CodeRed message said.

If you live in a flood-prone area, consider getting elsewhere before the storm hits. Move your vehicles to higher ground — Darien has lots available on the south side of the Noroton Train Station and at Hindley and Tokeneke schools. Don’t drive through flooded streets, the message warned. And train service has been suspended for Sunday.

“Eversource is preparing for prolonged widespread power outages possibly up to 10-days,” the message said. “Cellular service and internet service may be impacted when the power goes out.”

Eversource, in a news release, told the public, said outages could affect most Connecticut customers, with outages lasting as long as three weeks for some.

The “energy company will declare an Emergency Response Plan (ERP) Level 2 Sunday at 6 a.m. This means that of the roughly 1.25 million Eversource electric customers in Connecticut, between 50 and 69% could lose power and restoration efforts could last between eight and 21 days. […]

“Now’s the time to prepare with your family, and to check in on your neighbors who might need a hand,” said Craig Hallstrom, president of regional electric operations. “Our crews will be out as soon as it’s safe and will stay on the job until the power is back on.”

Eversource urges customers to always stay clear of any downed wires and to report them immediately to 911. Be sure to report any outage online at www.eversource.com, or by calling 800-286-2000. Customers who signed up for the company’s two-way texting feature can send a text to report an outage and receive outage updates as they happen.

With the arrival of Hurricane Henri and its high winds and damaging gusts expected to arrive around 8 a.m. Sunday and continue throughout the afternoon.

Saturated soil and high winds will result in downed trees and power lines creating life safety hazards. Please remember to not travel over or under downed power lines.

The Town of Darien is asking all residents, especially flood vulnerable residents, to be aware that Hurricane Henri, in addition to the full moon, will bring heavy rains, high wind and storm surges which will lead to flooding.

Flood prone areas should be prepared for rainfall and flood conditions similar to or greater than what we experienced on July 9.

Rising flood waters can inundate homes and businesses very quickly and those residents in flood prone areas should consider evacuating early, as waiting too long can be life threatening and emergency responders may not be able to get to you. 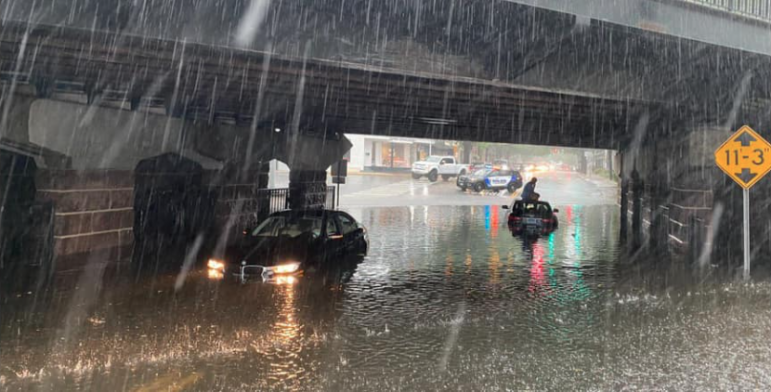 A PICTURE OF THINGS TO COME? From Darien’s last big flooding problem in early July: Darien police posted this picture on Facebook, with the message: “We are in the process of removing occupants from flooded vehicles. Please avoid areas of small streams and rivers and do not drive if not necessary.”

Be proactive by moving your vehicles to higher ground as early as possible before the storm. Vehicles should be moved to Hindley or Tokeneke Schools and the south side of the Noroton Heights Trains Station. It is likely that areas of town will be rendered inaccessible by flooded roadways or downed trees and wires.

Flood waters are extremely dangerous, and you should never attempt to drive through them, as what lies below those murky waters can be devastating, may be much deeper than expected, or even open manholes and drain grates can have their tops displaced. Additionally, you should not enter flooded basements as there can be electrical hazards.

Eversource is preparing for prolonged widespread power outages possibly up to 10-days. Cellular service and internet service may be impacted when the power goes out.

Please utilize 911 for emergency communications only. For non-emergent calls like trees down or wires down utilize the routine line of the Darien Police Communications Division at (203)-662-5300. Report power outages directly to Eversource at (800)-286-2000.

The Police, Fire, and Emergency Medical Service will make every attempt to reach you in an emergency, but non-life-threatening emergencies may not have personnel or equipment available to respond, all calls will be prioritized based on life safety. Emergency and utility responders may not be able to respond during periods of high winds.

Thank you. Be safe.