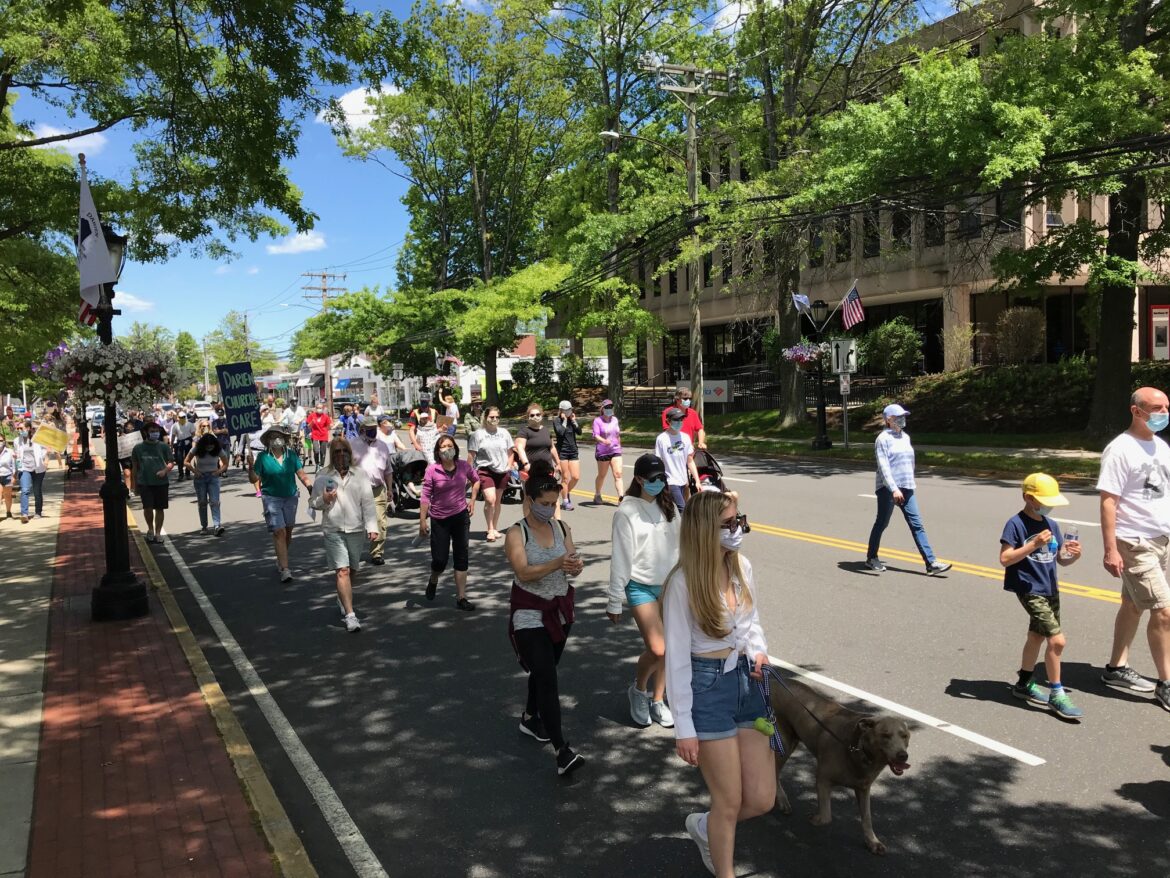 A crowd of between several hundred and a thousand people took part in a march Sunday from downtown Darien to downtown Noroton honoring George Floyd, killed after he was arrested by Minneapolis police.

Organized by the Rev. Dale Rosenberger, pastor of the First Congregational Church in Darien, along with clergy from St. Luke’s Parish, apparently including Rev. Susan Wyper and perhaps clergy or volunteers from other churches.

The event lasted about an hour and included statements from clergy, as well as the 1.8-mile march west along the Post Road. Darien police blocked off street entrances to the Post Road, along with the Interstate 95 Exit 11 ramps. The westward-traffic side of the Post Road was closed, but vehicles could pass in the other direction. 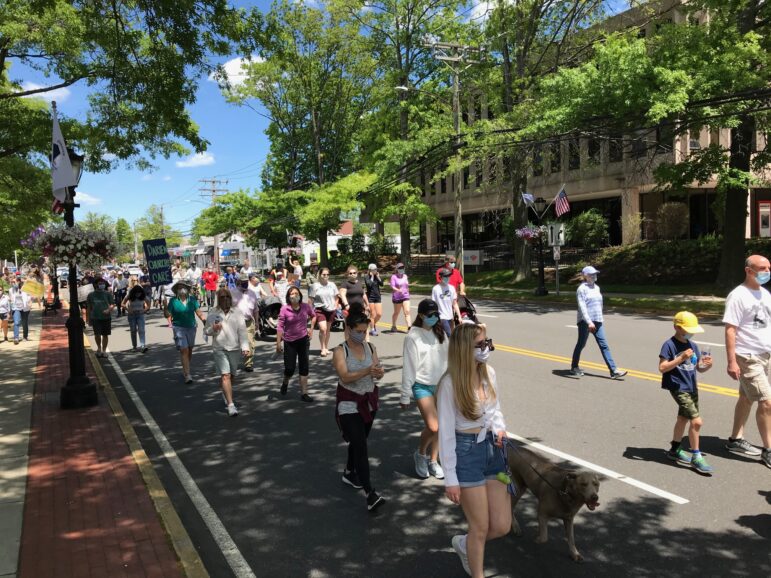 “Police were very good” in keeping the marchers safe from traffic, said David Bayne, chairman of the Democratic Town Committee and a member of the Representative Town Meeting. “They were very respectful, and the crowd was very respectful of them.” 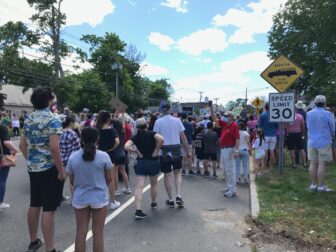 The end of the event in downtown Noroton

Police Chief Donald Anderson released a statement Monday which said in part: “On Sunday, May 31, the clergy of our town organized a march through our downtown during the mid-day hours. I would like to personally take this opportunity to thank each and every participant who remained peaceful and safe while engaging in their protected rights of both peaceable assembly and protest. This should be the model all other groups should look to emulate.”

Lots of families brought their children to the march, Bayne said. “It was a good cross-section of Darien. That, I think, said a lot for this town. Lots of young children.” 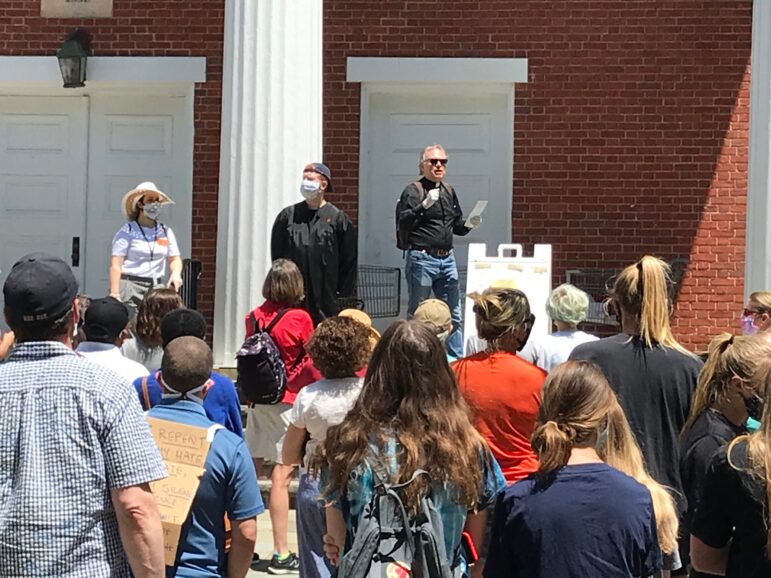 Someone speaking outside the First Congregational Church in Darien before the start of the march. For whatever reason, the organizers appear to have neither spread word very much about the public march through town, nor have responded to Darienite.com\’s requests for comment, so we have nothing to report about what they said.

Police were very insistent that the crowd disperse at the end of the march, Bayne said.

Judy Phillips, executive director of the YWCA of Darien-Norwalk, an organization with its own active anti-racism programs, said her group heard about the march this weekend and got word out to its members. She attended the event herself. “It was a really orderly crowd,” she said.

“There was definitely a sense of mourning of what has happened,” Phillips said of the event, “and this is still happening in the United States. But it was very calm.

“I’ve really been encouraged by the amount of people that came out,” she said. “I see the community is energized and galvanized around people making change.” 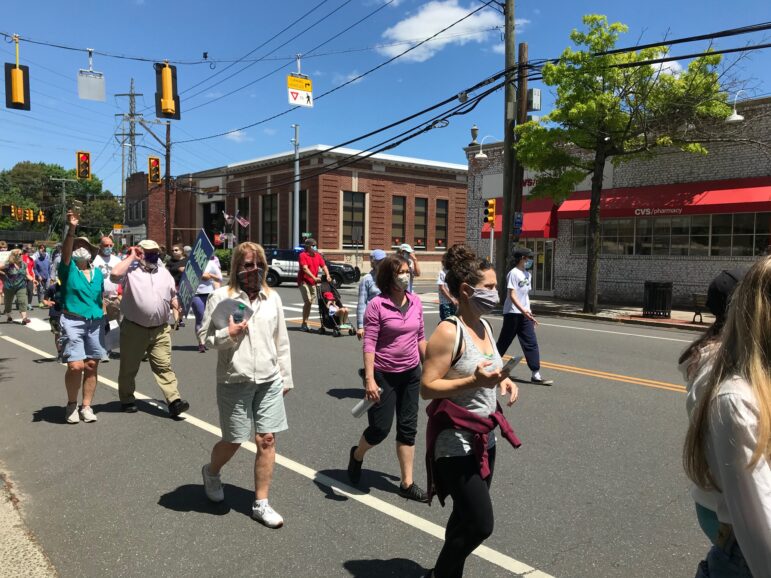 Marching through downtown, with one participant occupying a baby stroller.

Before the march, Rosenberger made a statement to the crowd gathered in front of the First Congregational Church of Darien. Rosenberger did not return a phone message left Monday at his office, nor did Wyper return a message left on her home telephone.

First Selectman Jayme Stevenson was present, along with State Rep. Terrie Wood, but no other state legislators, who may not have been told, given the apparent rickety nature of what passed for announcements of the event. 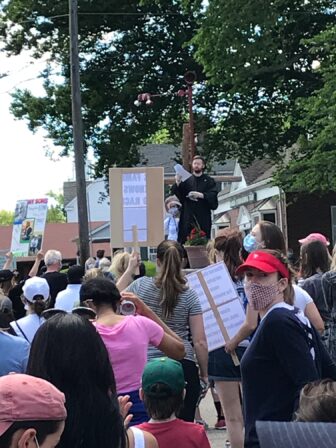 Another speaker at the event.

State Senate Majority Leader Bob Duff, who represents much of Darien, was at another event in Norwalk, Bayne said. Both Bayne and Phillips said their organizations heard about the event at the last minute and then got word out themselves.

In addition to Darien residents, attendees at the event included groups from Black Rock and around the area, Phillips said. Bayne said he noticed people from Norwalk and Bridgeport and from a Jewish temple in Stamford.

“Everybody I saw was wearing a mask,” Phillips said. “People were keeping their distance.”

Bayne, interviewed separately, had a different recollection the next day: “Everyone was wearing masks, that I could see, and trying to stay six feet apart. That may have been more aspirational than otherwise.”

“What came out of it was ‘Let’ make this a movement, not a moment,” Phillips said.

Bayne said, “Contrasted with all the violence that we have seen across the country, what happened in Darien, I thought, said a lot for this town.” 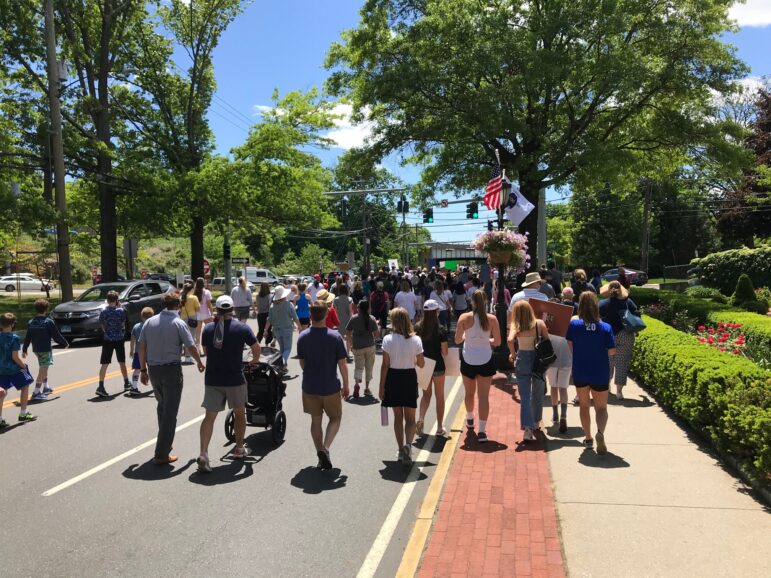 The crowd moves through downtown. 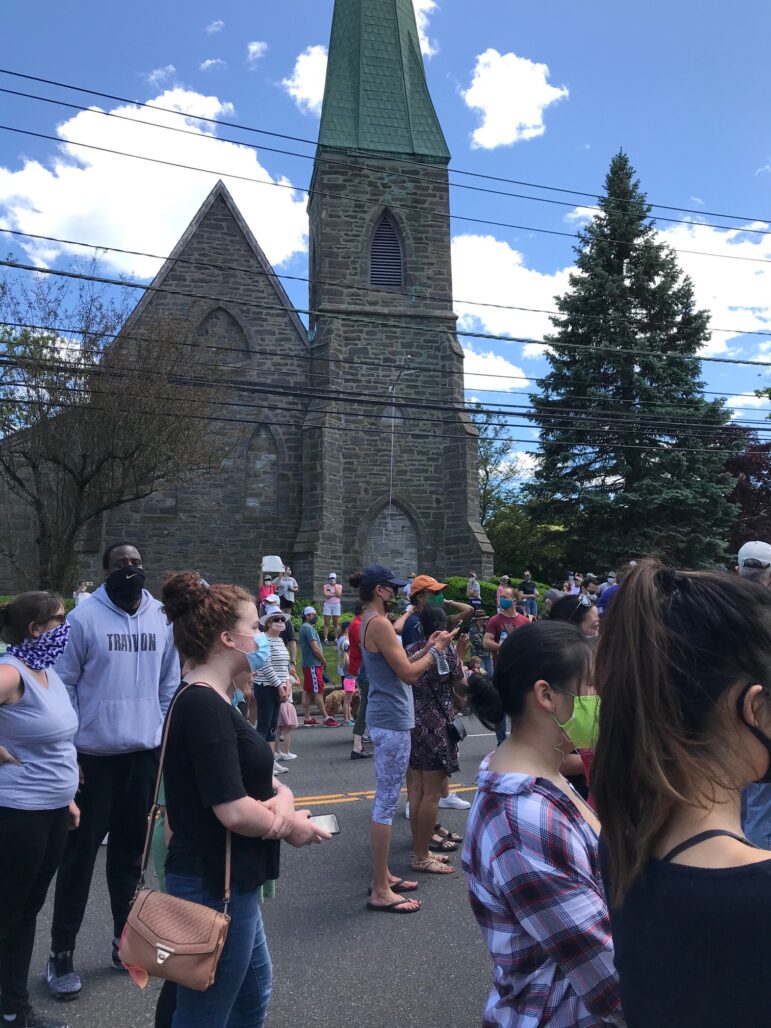 A final look at the crowd, at this point near St. Luke’s Church in Noroton.