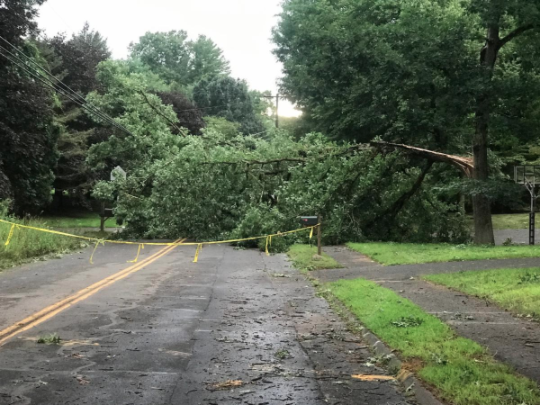 “’The impact from this storm, in terms of power outages, is greater than Superstorm Sandy. The fierce winds with this storm caused widespread power outages and historic damage, affecting customers in all of the 149 communities we serve in Connecticut,’ said Eversource Vice President of Electric Operations in Connecticut Michael Hayhurst.” (Full texts of both announcements are below.)

Governor Ned Lamont today announced that he is requesting the Connecticut Public Utilities Regulatory Authority (PURA) to conduct a thorough investigation of the state’s public utility companies, including Eversource and United Illuminating, amid widespread outages caused by Tropical Storm Isaias that have left hundreds of thousands of customers without power.

The governor said that the companies’ response to the storm has been wholly inadequate and does not meet the obligations for the critical resources they are responsible for providing on behalf of Connecticut residents. He wants to know what specific steps the companies took in the lead up to Tropical Storm Isaias, which had been forecast to impact Connecticut several days prior to making landfall and remained relatively on the track that meteorologists had predicted.

“Several years ago, Connecticut experienced largescale outages that took days to recover from, and we were told that the utilities were improving their resources so that they can be prepared for the next time Mother Nature inevitably hits again,” Governor Lamont said. “And now here we are, with a wholly inadequate response to another storm. I’m asking PURA to begin this investigation so that we can determine whether the companies are meeting their legal obligations and whether any penalties need to be applied. The people of Connecticut deserve better than the service they are receiving.”

Governor Lamont is asking PURA to:

PURA is an independent state office responsible for regulating the rates and services of Connecticut’s investor-owned electricity, natural gas, water and telecommunication companies and is the franchising authority for the state’s cable television companies. In the industries that are still wholly regulated, PURA balances the public’s right to safe, adequate and reliable utility service at reasonable rates with the provider’s right to a reasonable return on its investment. PURA also keeps watch over competitive utility services to promote equity among the competitors while customers reap the price and quality benefits of competition and are protected from unfair business practices.

Hundreds of Eversource line, tree and service crews worked through the night after Tropical Storm Isaias and associated tornadoes tore through Connecticut causing widespread and historic damage to the company’s electric system.

Operating under its COVID-19 pandemic plan and adhering to strict social distancing, hygiene and enhanced sanitation measures to safeguard the health and well-being of workers and customers, Eversource crews are working around-the-clock shifts to address emergency situations, clear blocked roads, assess damage and restore power to customers impacted by the fierce storm.

As of 10 a.m., crews have restored power to more than 100,000 customers since the storm began yesterday. Approximately 617,000 Eversource customers in Connecticut remained without power as a result of the severe storm. The energy company anticipates restoration of all its customers in the state will take multiple days.

“The impact from this storm, in terms of power outages, is greater than Superstorm Sandy. The fierce winds with this storm caused widespread power outages and historic damage, affecting customers in all of the 149 communities we serve in Connecticut,” said Eversource Vice President of Electric Operations in Connecticut
Michael Hayhurst.

“We are taking to the skies to onduct a detailed damage assessment of our 17,000 miles of overhead equipment and using patrollers on the ground, so we can efficiently deploy our resources to get power restored for all of our customers. We recognize how difficult it is to be without electricity especially while many people continue working from home during the pandemic. Our crews will continue working until every customer has power back while also complying with stringent pandemic protocols.”

Most of the damage to Eversource’s electric system was caused by fierce winds accompanying the tropical storm that whipped through the region, bringing trees and branches down onto power lines. The energy company cautions customers to always stay clear of downed wires and to report them immediately to 9-1-1. Due to the
unique challenges associated with working during the pandemic and the devastating impact of Isaias along the entire East Coast.

Issues related to Eversource’s reporting system have been resolved and the energy company encourages customers to report any outage online at www.eversource.com, or by calling 800-286-2000. Customers who signed up for the company’s two-way texting feature can send a text to report an outage and receive outage updates as
they happen.

Eversource (NYSE: ES), celebrated as a national leader for its corporate citizenship, is the #1 energy company in Newsweek’s list of America’s Most Responsible Companies for 2020 and recognized as one of America’s Most JUST Companies and the #1 utility by Forbes and JUST Capital. Eversource transmits and delivers electricity to 1.25 million customers in 149 cities and towns, provides natural gas to 237,000 customers in 74 communities, and supplies water to approximately 198,000 customers in 52 communities across Connecticut. Eversource harnesses the commitment of approximately 8,300 employees across three states to build a single, united company around the mission of safely delivering reliable energy and water with superior customer service. The #1 energy efficiency provider in the nation, the company is empowering a clean energy future in the Northeast, with nationally-recognized energy efficiency solutions and successful programs to integrate new clean energy resources like solar, offshore wind, electric vehicles and battery storage, into the electric system. For more information, please visit eversource.com, and follow us on Twitter, Facebook, Instagram, and LinkedIn. For more information on our water services, visit aquarionwater.com.