Darien Arts Center Stage is proud to announce its production of the comedy, Sylvia, a comedy in which a dog becomes a major bone of contention between a husband and wife. 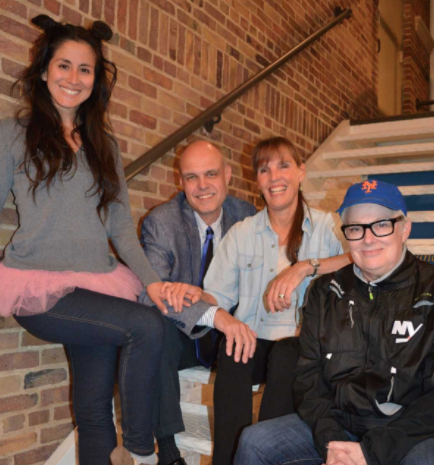 Greg, a middle-aged husband, brings home a dog he found in the park — or that has found him — bearing only the name “Sylvia” on her name tag.

Sylvia, a street-smart mixture of lab and poodle, offers Greg an escape from the frustrations of his job and the unknowns of middle age. But to his wife, Kate, the dog becomes a rival for affection.

The marriage is put in serious jeopardy until, after a series of hilarious and touching complications, Greg and Kate learn to compromise, and Sylvia becomes a valued part of their lives.

More about the play

David Jackins, who plays Greg, has previously been seen on the DAC stage as Charlie in On Golden Pond. He has also performed in Spring Awakening, The Farnsworth Invention, Our Town, and The Drowsy Chaperone with other Fairfield County companies. Dave is a founding member of Crystal Theatre in Norwalk, and is the founder/director of Creative Summer at The Mead School, which celebrated its 28th anniversary this summer.

Jacquie Carlsen, who plays Tom, Phyllis, and Leslie, has acted in Watch on The Rhine and Prisoner of Second Avenue at the Westport Community Theater, and in The Wizard of Oz, I Remember Mama, and Guys and Dolls at Curtain Call in Stamford. Jacquie works by day as a copywriter at Conair Corporation in Stamford.

Giovanna Olcese, Sylvia in the production, studied with Playhouse West Brooklyn Lab and is a member of the Theater Artist Workshop of Connecticut. Her most recent projects include The Incident and The 39 Steps with The Westport Community Theatre, Time Stands Still with Town Players of New Canaan, and The Last Days of Judas Iscariot with the Vagabond Theatre Company.

Susan Stanton plays the role of Kate. She has been seen in Doubt and Rabbit Hole with Westport Community Theatre, on ABC television’s All My Children and in several Play with Your Food performances. Theatre Artists Workshop projects include her original performance pieces Forever & Always and Weightless. Letting Go, a film for which she choreographed and performed, premiered at Lincoln Center’s Dance on Camera Festival.

Christian Amato is a director, producer and theatrical strategist who has produced over 45 off-Broadway productions. He has served as a producer for Rocky and The Color Purple and has developed successful campaigns on Broadway for productions such as Kinky Boots, Matilda, Mothers and Sons and It’s Only A Play. He served as founder and producing artistic director of The Theatre Project and Shakespeare Off-Broadway, which TheaterMania has hailed as “exciting and innovative.”

Sylvia is sponsored by A Total Look Mobile Dog Grooming in Darien and presented through special arrangement with Dramatist Play Service.