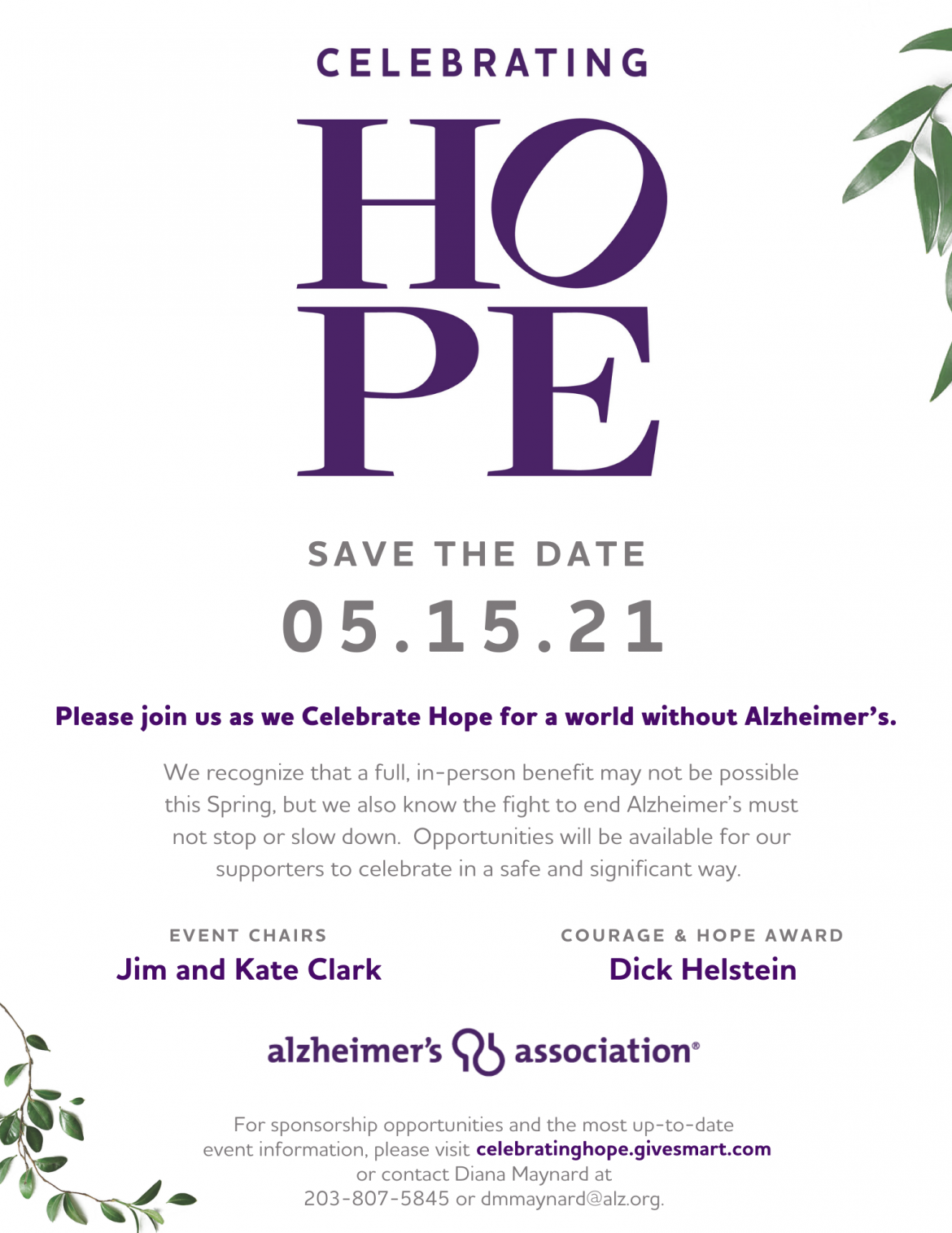 The 8th annual CT Chapter Celebrating Hope benefit will be held on Saturday, May 15, 2021. Opportunities will be available for all of our supporters to celebrate in a safe and significant way. More details to come.

In this time of unpredictability, one thing is certain: the programs and services of the Alzheimer’s Association are needed now more than ever.

We invite you to join us from 8 to 8:30 p.m., May 15 as we celebrate hope for a world without Alzheimer’s and all other dementia.

The impactful and inspirational program will be emceed by MLB All-Star, World Series Champion and Greenwich resident Mark Teixeira, and will feature remarks from families and special guests who inspire hope for a world without Alzheimer’s and all other dementia.

There are more than 80,000 people living with Alzheimer’s in Connecticut, and that number is expected to reach more than 91,000 by 2025. This annual gala will help the Alzheimer’s Association Connecticut Chapter educate and empower those living with dementia and their caregivers, while continuing to support critical research to advance treatments for Alzheimer’s.

Special guest, actress and Alzheimer’s Association Celebrity Champion Ashley Williams will share her personal reason for supporting the Alzheimer’s Association. In 2016, Williams lost her mother Linda following a long journey with the disease. Inspired by her mother’s career in fundraising, Williams is dedicated to advocating for families facing Alzheimer’s while she remains resilient in her effort to raising awareness and funds to advance the Association’s mission.

The 2021 Celebrating Hope co-chairs are Jim and Kate Clark from Greenwich, both have family connections to the disease.

“My mom died more than 10 years ago from Alzheimer’s and I am honored to co-chair this event with my wife, not only to honor my mother but also to help raise funds for research and the eventual cure of this terrible disease as well as advance care and support of those afflicted by it,” says Jim Clark.

“When my aunt was diagnosed, I called the Alzheimer’s Association,” Kate Clark adds. “I didn’t want to be part of this club, but it’s comforting to know there are people to talk to. We don’t want our children or grandchildren to go through this. The more research there is, the closer we are to ending this disease.”

The Courage and Hope Award will be given to longtime Darien resident Dick Helstein, who cared for his wife Susan through her six-year journey with Alzheimer’s until she passed away more than a year ago.

Since its inception, Celebrating Hope has raised more than $1 million for Alzheimer’s and dementia care and research.

All donors will be invited to view the program on May 15 at 8 pm. To donate or to bid on the virtual silent auction, visit celebratinghope.givesmart.com.

About the Alzheimer’s Association

The Alzheimer’s Association is a worldwide voluntary health organization dedicated to Alzheimer’s care, support and research.

Our mission is to lead the way to end Alzheimer’s and all other dementia — by accelerating global research, driving risk reduction and early detection, and maximizing quality care and support.

The Alzheimer’s Association Connecticut Chapter is grateful to the 2021 Celebrating Hope sponsors for their support, including: