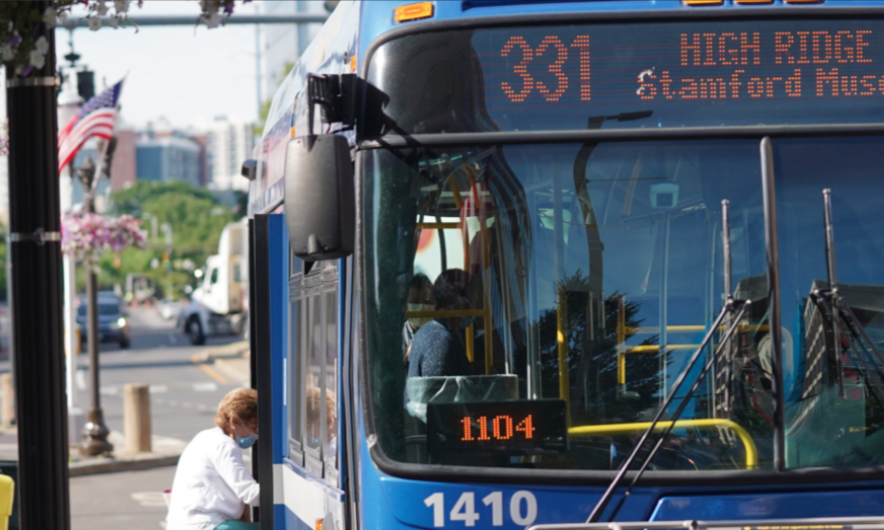 Boarding one of the current CTtransit buses in Stamford (not one of the electric ones, which are coming).

The Connecticut Department of Transportation (CTDOT) has been awarded a $6.7 million federal grant to modernize the CTtransit bus facility in Stamford.

The modernizing project will provide accommodations for battery electric buses, which will soon be used on the system, which covers Stamford, Darien and some other towns. The state is buying a dozen electric buses for CTtransit in the Stamford and New Haven areas.

“Connecticut’s public transit system is long overdue for a modernization, and this grant will help in our transition to an electric bus fleet on the CTtransit system, which will provide both environmental and economic benefits to the region,” Gov. Ned Lamont said.

The grant will be used to upgrade the infrastructure at the CTtransit Stamford bus facility to handle battery electric buses. Electric buses are currently on order and were funded through Connecticut’s share of the 2018 Volkswagen emissions settlement, along with FTA Section 5307 funds (80 percent federal, 20 percent state). Twelve buses are being purchased for operation in the New Haven and Stamford service areas.

The Stamford facility improvements include upgrades to the building’s HVAC system, electrical upgrades to handle increased loads, upgrades to fire suppression systems and LED lighting upgrades. These improvements will retrofit the existing bus garage to accommodate the unique needs of the new electric buses. 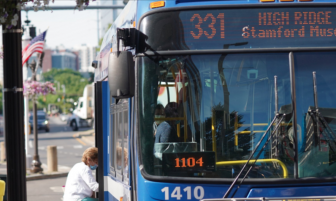 Boarding one of the current CTtransit buses in Stamford (not one of the electric ones, which are coming).

“The funding we secured today from the Department of Transportation is good news for Stamford’s economy, and will go a long way in reducing carbon emissions and modernizing our transportation infrastructure,” U.S. Sen. Chris Murphy said. “I’ll continue to work with Senator Blumenthal, Congressman Himes and all of our state and local partners to keep these wins coming.”

U.S. Rep, Jim Himes said: “Investing in Stamford’s CTtransit bus storage facilities is good for Stamford’s economy and good for the environment as we transition to a greener economy.

“By facilitating the transition to electric buses, this grant will create jobs, enhance Stamford’s public transportation infrastructure, and improve public health by reducing pollutants that create life-threatening smog. That’s a win-win-win for everybody.”

“The everyday users of our Transportation Center are the main benefactors of this upgrade to our bus infrastructure,” Stamford Mayor David Martin said. “Improving our buses and facilities are a good start to the modernization needed at the Stamford Transportation Center, which continues to be the most active train station in all of Connecticut.”

“CTDOT is committed to incorporating electric buses into our fleet to significantly reduce emissions,”Transportation Commissioner Joseph Giulietti said. “This award represents great progress toward our electric bus future. I want to thank our federal partners, and our Congressional delegation for supporting our efforts and recognizing the ongoing value of these continued investments in our public transportation system.”