Darien High School student Christopher “Tripp” Lyons has been honored with the 2021-2022 Good Citizen Award by the Darien’s Good Wife’s River Chapter of the Daughters of the American Revolution. 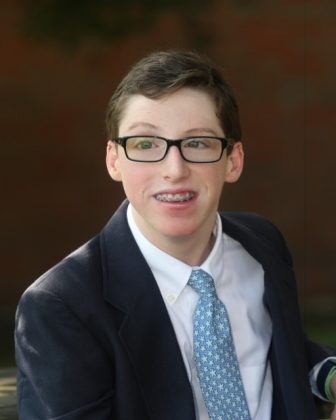 Christopher “Tripp” Lyons, named Good Citizen of the Year for 2021-2022 by the Darien chapter of Daughters of the American Revolution.

The award, officially the ” 2021-2022 National Society Daughters of the American Revolution Good Citizen Award” is given to a DHS senior who best exemplifies the qualities of patriotism, citizenship, dependability and service to community.

Tripp was selected to receive this award by the faculty and the senior class at DHS. He will receive his award pin and certificate from Darien’s DAR Chapter Regent, Nicole Gorman at a reception at the Museum of Darien on Sunday afternoon, Dec. 5.

Tripp’s varied activities include serving as the manager of the DHS Varsity Basketball team for the last three years and as the freshman manager before that. Tripp’s role is to give “hype” pre game speeches before every game. He takes time to write a motivational speech typically about a challenge or obstacle he has faced.

Tripp manages the Varsity Baseball team as well and along with writing motivational speeches, he keeps stats for the team. Despite a physical disability, Tripp remarks about the inclusivity he has received from both teams. He credits these team members as being “amazing friends,” who deserve praise.

Lyons, the son of Colleen and Ed Lyons, has been involved with the Model U.N. Club for his entire high school career, serving as secretary-general since his junior year.

During Tripp’s sophomore year, he was under-secretary-general of programming and was responsible for organizing and running weekly meetings as well as conferences that were competitions with other schools.

In addition, Tripp currently serves as Secretary of the DHS Model Congress Club, where he was the congressional whip during his sophomore year. He is responsible for recruiting new club members as well as keeping track of attendance for weekly meetings. Trippsaid his proudest accomplishment was winning “Best Delegate” at the 2019 Yale Model Congress Conference.

Membership in the DAR is open to any woman over the age of 18 who can trace her direct lineage to a patriot who served or gave material aid to the cause for American Independence during the Revolutionary War. For more information, please contact the Regent.