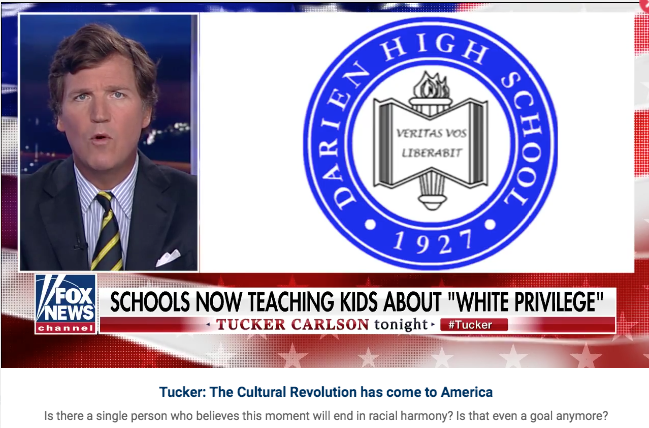 Image from the video on the Fox News website

Fox News commentator Tucker Carlson on Friday criticized Darien High School Principal Ellen Dunn for recommending a project of the Southern Poverty Law Center as one of the sources of information students and parents could use in learning about racism in light of events surrounding the George Floyd killing.

“Now, ironically, the Southern Poverty Law Center is itself a hate group,” Carlson said. “That has been documented extensively. Now their agenda is the school’s agenda. It’s what your kids are learning.”

That was Carlson’s entire criticism of Dunn. In its entirety, his mention of Darien High School took up about 30 seconds (all of it quoted below) of a monologue about teaching or indoctrinating white children that they’re the products of “white privilege.” (See below for a link to the entire eight-minute monologue from his “Tucker Carlson Tonight” show).

Image from the video on the Fox News website

Dunn, in a letter emailed to parents on Thursday, discussed several sources of recommended information for students and parents. Among them, she prominently mentioned the SPLC in these two paragraphs:

The principal mentioned the SPLC as a source in these two paragraphs:

Dunn said that the list of sources she was providing was from the school district, although it was unclear which educators, group or department had gathered them.

UPDATE, 9:38 p.m.: Darienite.com has been told by a source who asked to remain anonymous that the DHS Social Studies Department had nothing to do with the content of the letter.

About Dunn and DHS

Carlson’s comments took up about 30 seconds of a much longer monologue criticizing various people promoting the idea that children should learn or be indoctrinated about “white privilege.”

Here’s the complete text of what Carlson said regarding Dunn’s letter:

His Monologue on the Overall Subject

Here’s the video of Carlson’s monologue, titled “The Cultural Revolution has Come to America,” on the Fox News website. The part about Dunn and DHS starts at about the 5:38 mark and runs to 6:07.

About the Southern Poverty Law Center

The Southern Poverty Law Center has a mixed reputation: It is an institution cited as a source on race and civil rights by respected news organizations nationwide, including National Public Radio. Simultaneously it is a left-wing group criticized by others, including writers in similarly respected media outlets, who say certain SPLC’s labeling of some groups as “hate groups” is sometimes politicized and scurrilous.

The materials Dunn mentioned, in the “Teaching Tolerance” section of the SPLC website don’t appear to have any direct connection with the SPLC’s project of labeling certain organizations as hate groups or individuals as promoters of hate.

The SPLC has repeatedly withdrawn and apologized for some of those designations over the past decade and defended itself from other accusations. In 2018 it agreed to pay $3.375 million to settle a lawsuit from one target. An article in The Atlantic discussing that incident said the SPLC  was getting criticism from “sympathetic observers and fellow researchers on hate groups, who worried that SPLC was mixing its research and activist strains.”

Politico magazine quoted this critic in a 2017 article profiling the SPLC:

EDITORIAL: On Having Perspective and Being Fair and Balanced

If Dunn had simply noted in her letter that the Southern Poverty Law Center has been controversial in a different area, not related to its work on educating kids about racism, Tucker Carlson would have had nothing to criticize.

It would be prudent for an educator, before making recommendations to all parents of students at a school to do a web search, something like “Southern Poverty Law Center” + criticism, where articles from numerous respected sources go into detail about the SPLC’s troubling actions.

So we think that was a mistake (one done when educators have unusual pressures on them from the pandemic and school closings). How big a mistake? Extremely minor. We don’t expect busy principals to know the ins and outs of every controversy from the past decade. We don’t even expect them to know that a particular group fighting racism has some controversies swirling about it. After all, you can find references to the SPLC in the news media all the time, usually without hearing about those controversies at all.

If the DHS Social Studies Department was involved in putting this list together (we think that’s what happened, although she didn’t specifically say that), we think it’s somewhat less minor. Social Studies teachers should know a bit more about political controversies in order to put them into perspective if they come up in school. The value of Dunn’s list, after all, was that it was implicitly vetted as appropriate for students. We think including the SPLC was not irresponsible, it just needed a small caveat.

If Tucker Carlson had said the principal’s citing of the SPLC was problematic, that would have been a more prudent way of addressing the issue — but it wouldn’t have been good for ratings. For him to call the SPLC a “hate group” is, really, to repeat the same exact mistake the SPLC made in some of its labeling of other organizations as hate groups.