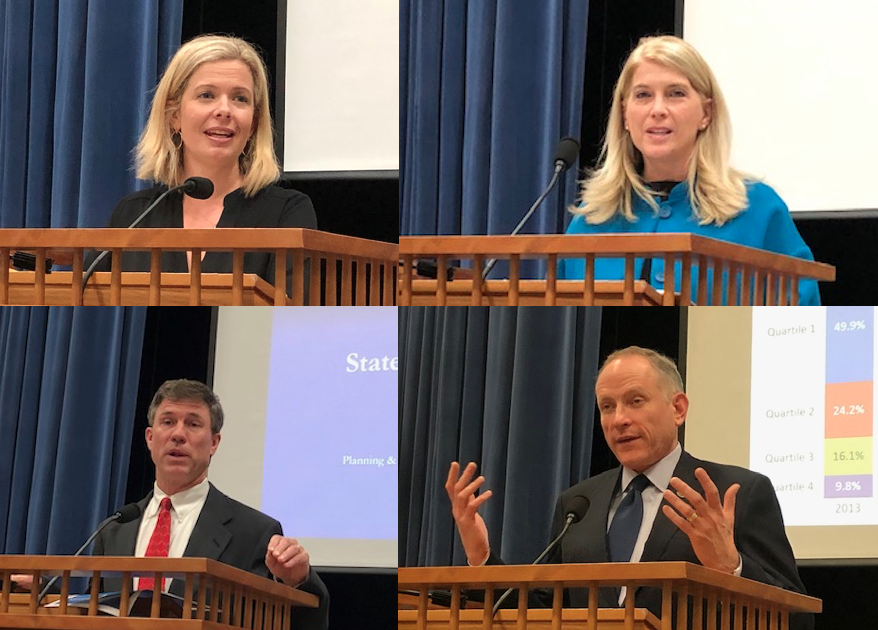 From the same podium Monday night before the Representative Town Meeting members: Four speakers, each delivering a State of the Town address.

The town’s tax burden is shifting to its less well-off residents. Construction start dates for the three huge redevelopment projects seem firmer and should enlarge the tax base, along with the number of stores and restaurants in town.

The state might want to build affordable housing and commercial buildings on train station land. In the last fiscal year, the town spent less than it thought it would and got more in revenue; it may spend more than it expected to to replace the the Ox Ridge School building.

Expect challenges, setbacks, opportunities, improvements — those were some of the points made in this year’s four “State of the Town” speeches Monday night before the Representative Town Meeting.

Plans and Predictions for Darien: Short- and Long-Term

Here are some predictions and changes the speakers said are coming: 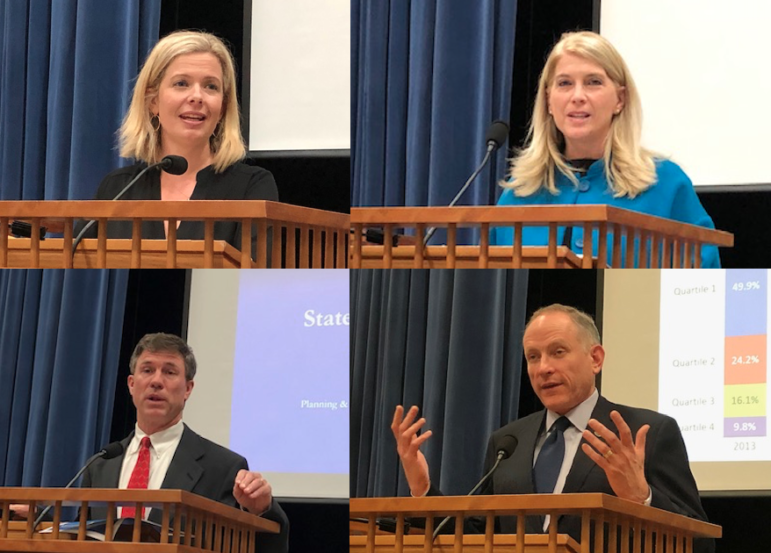 From the same podium Monday night before the Representative Town Meeting members: Four speakers, each delivering a State of the Town address.

Editor’s note: This section was not published in the original article, but added at 5 p.m.:

Stevenson discussed a number of past and future town initiatives, mostly briefly, in her speech.

She made extended comments on an upcoming town initiative to help preserve and maintain the town’s sanitary sewers, as well as the town’s efforts to be named a “Sustainable Community” by a statewide organization.

Problems with them include illegal hookups and leaks that let groundwater into the system, both of which add water not supposed to be sent to the Stamford wastewater treatment plant, at Darien’s expense.

Grease improperly sent down the drain at restaurants is a problem that could cause the sewer mains to clog, she said.

The town has come up with a proposal to replace the Noroton Heights Railroad Station and is seeking state approval for it, Stevenson said. 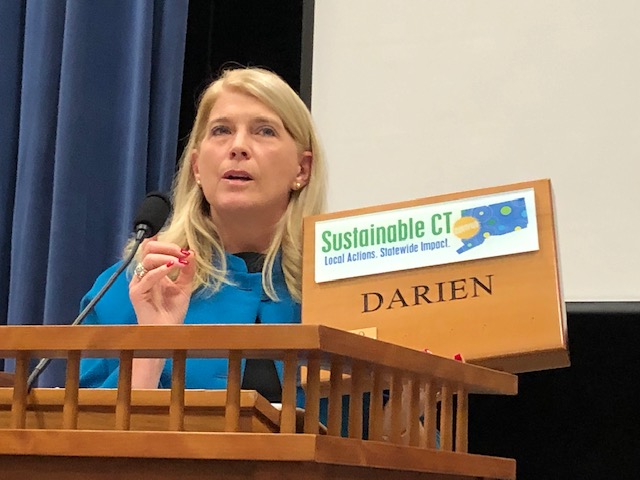 Stevenson shows the plaque awarded to Darien for bronze-level certification in the state sustainability project.

“Sustainability” includes ways of helping the town largely with respect to the natural environment, but also in matters related to the economy, energy efficiency, helping the town stay affordable for those with less money.

Darien received bronze-level certification from SustainableCT, the statewide organization running the program, and Stevenson wants the town to get a renewed or higher-level certificate when this certificate expires at the end of 2022.

“The Board of Selectmen has made ‘sustainability’ throughout town government a priority. I invite the Board of Education and all town businesses and agencies to partner with us on this effort,” Stevenson said.

Stevenson also noted that the Police Department hasn’t assigned an officer to narcotics investigations, although additional civilian dispatchers have been hired, in part to enable the department to do that.

“The November election was a great time to knock on doors for me and to talk with folks about our community. It’s wonderful to see so many young families choosing Darien as their home,” Stevenson said. “Our schools and parks get high marks, and everyone is eager for the redevelopment projects to transform our commercial centers. 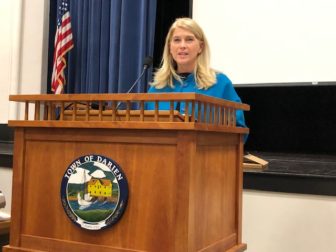 “Keeping property taxes low was a common refrain,” she said. “They’re counting on us to be good stewards of their tax dollars.”

Zagrodzky said the town has been in good financial shape, but “we’re just not seeing growth in the Grand List like we did in the past.” Further, he said, if you divide residential property in town into four “quartiles,” from most to least expensive, the top two quartiles have lost value from 2013 to 2018 and the bottom quartile has gone up by more than 8 percent.

Because of that, even a flat town budget would mean higher taxes for town taxpayers with the least expensive homes, he said. He plans on announcing how the upcoming proposed town budget would affect taxes in each quartile, so that public officials know the pressure any tax increases would put on residents with less money.

“Even though we might say we’ve done a good job at keeping taxes flat, the reality is that may not be true for every quartile,” he said.

“My message has been quite consistent over the years, and it’s consistent today: It’s very important that we pay close attention to spending, not just at budget time, but in every activity we engage in.

“I encourage everybody who has a role in this to make sure we scrutinize that, and ask that question: Do we need to spend that money, and are we doing so in the most effective manner possible?”

The town both spent less than was budgeted in the most recent fiscal year (2018-2019) and received more tax revenue than had been predicted, Zagrodzky said. The extra money swelled the town’s fund balance (a “rainy day fund”) to more than $17 million — well above the $12 million minimum that the town likes to maintain for emergencies and to keep its AAA bond rating intact, he said.

The Board of Finance has already moved $2.2 million into lowering the town’s debt burden, which should result in the town saving about $50,000 a year in debt service, he said. 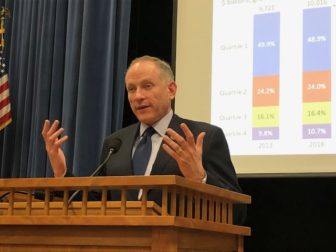 Board of Finance Chairman Jon Zagrodzky delivering his 2019 State of the Town address.

With the Ox Ridge School building project, the debt burden is expected to rise to $89 million in Fiscal Year 2023 from its recent $60 million level, then go down again, Zagrodzky said. A new school building is definitely needed, he said, but the cost estimates recently were revised from the original $63 million to more than $70 million, he said.

Zagrodzky said he’s hoping to keep the number closer to $63 million, as long as “value engineering” of the project doesn’t result in the building needing repairs and additions 10 years into the future. Zagrodzky is a member of the project’s building committee.

The overall town debt, even with costs added by the Ox Ridge school project, is comparable to what it has been in the past, and Zagrodzky said he believes it won’t be too burdensome. He added later that the two biggest things town decisionmakers need to concentrate on to manage the town’s finances well are construction projects and levels of personnel — either can put pressure on town budgets for decades into the future.

Zagrodzky brought up a point made by Olvany: For every million dollars added to the grand list, roughly another $12,000 in taxes goes to the town each year, Olvany said, citing Town Assessor Anthony Homicki.

Zagrodzky said he thinks the redevelopment in town, already approved and planned to begin soon, could mean the town could see an increase of about $250 million in assessed value in several years, adding about $3 million in annual revenue.

And Zagrodzky thinks other property values in town could rise because the new projects in Noroton Heights, downtown and elsewhere could make the town look even more attractive to home buyers.

The town is about to see construction increase and, within a few years, increases in the grand list and in the number of town restaurants and businesses, Olvany said. 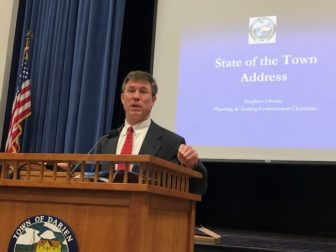 A total of 14 new units of condominium housing in the Kensett II project off of Hoyt Street should be coming to the market in 2020, he said. The total of 70 units in the Kensett development should add a total of $1 million in tax revenue, or about $15,000 per unit, he said.

Meanwhile, he said, Old Town Hall Homes, now rebranded The Royle at Darien, is expected to be completed sometime in the summer of in 2020, with 55 units of housing, deed-restricted, primarily for the elderly.

Federal Realty’s project in Noroton Heights will start its initial phase with replacing the space currently occupied by Walgreens with space in a new building next door to it (between the present Walgreens and Equinox).

“That work, which I’ll call Phase 1, will occur now and into the fall of 2020,” Olvany said. “Significant drainage improvements will also be implemented as part of this project,” Olvany said.

The projected cost of the Federal Realty project is $110 to $120 million, he said.

The Palmer’s project to replace the Noroton Heights Shopping Center, a $40-plus million project, is about to get underway, Olvany said. “All of their financing is now finalized, they’ve hired their general contractor, logistics plans are in, and they’re ready to get started.Some of the demolition will occur starting in January. Completion is expected sometime in 2022.

In the spring of 2020, construction of the Corbin District in downtown Darien is expected to get underway. A first step will be demolishing the Gulf service station at the corner of Corbin Drive and the Post Road, then redevelopment of the east side of Corbin Drive (across the street from the Post Office).

Changes to the west side of Corbin Drive will get under way in 2021, 2022, after the east side is already done.

“We’ll be going through a little discomfort from the construction activities, but the end result should be spectacular new additions to both our residential and commercial tax base, and new living, shopping and dining opportunities.”

In her speech, Ochman gave a long list of new education initiatives at every grade level, including “Singapore Math” instruction in elementary schools and a “Health and Wellness/Social Emotional Learning curriculum” in the middle and high schools. 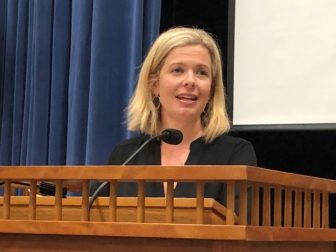 Tara Ochman, chairperson of the Board of Education, delivering her State of the Town address.

“Also, the addition of a second psychologist to each elementary school was an important and often discussed initiative. While we are only three months into the school year, early reports from building administrators show service goals to meet student needs are being achieved.

“As a Board we look forward to a comprehensive update on this addition in the future. Also, as we continue conversations around the State we find we are not alone or unique in seeing a rise in requests for staffing related to mental health, especially at the primary level.”

“Currently 4,656 Children are enrolled K-12 in the Darien Schools, with another 100 children in our ELP program. Our most recent enrollment study, by the independent firm Milone & MacBroom, projected out to 2029-2030 noting a slight decline of about 100 students by that time. As the [state] Commissioner of Education noted at a recent meeting here in Darien, we are a high growth and high achievement district.

“Our current average cost per pupil is $21,930, which has grown, but still places us squarely in the median range in our comparable district reference group.

“In the new year we will work with both the Education Committee and the Finance & Budget Committee to communicate the details of the Teachers Contract. At the high level, the BOE successfully negotiated a contract that respects our teachers, and initiated workload changes which will provide the Town with both immediate and long term savings.”

Ochman also gave her audience “a few thoughts” about the education budget:

“Budgets engender important practical and philosophical debate; and, it is true that the School budget is a large portion of the overall tax base. However, our schools are an essential community service. Robust, strong schools are a generational investment. They drive residential real estate markets, and related commercial economic growth.

“Our schools help make Darien a destination. A place where families grow, graduate and as many of you know return. Our last three years of budgets have shown the smallest percentage increases compared with recent history and compared to many other Mill Rate impact areas. We carry no debts or surpluses. Any unused funds are returned to the Town to benefit the overall financial wellbeing of the Town.

“As a community, we have a proud tradition of delivering financial responsibility and educationally sound school budgets, it is our calling card.”

Here’s when each of the speeches begin on this Darien TV79 video, according to TV79: