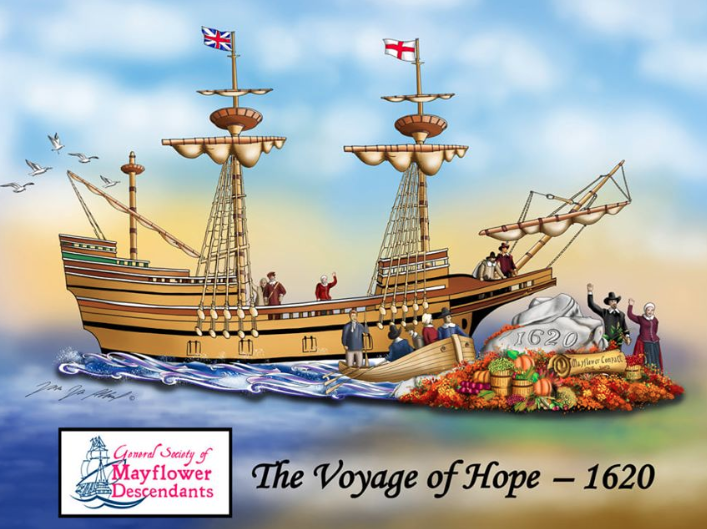 If you watch the  Tournament of Roses Parade on Jan. 1, you’ll see a replica of the Mayflower, a float from the General Society of Mayflower Descendants, and Carol Wilder-Tamme of Darien will be on it.

The “The Voyage of Hope~1620” float in the Pasadena, California parade will commemorate the 400th anniversary of the landing of the Mayflower.

“I’ve been selected to be a 17th century attired Mayflower passenger on the float,” Wilder-Tamme said. She sent in an eight-page application, which was accepted by the organizers.

Wilder-Tamme’s Mayflower ancestors include: Francis Cooke (a Separatist that had lived in Leiden to escape persecution in England), and adventure sojourners; Richard Warren, Stephen Hopkins and his daughter Constance who was about 13 during the crossing.

As a member of the Connecticut Mayflower Speakers Guild, Wilder-Tamme speaks in costume as Constance, 40 years after she landed.

“Making my costume was a long labor of love for the speakers guild and this once in a lifetime event!”

The “Voyage of Hope~1620” float will be about 55 feet long and 18 feet wide. The mast will be able to collapse to 17 feet to go under a bridge on the parade route.

The ship is not at full sail to show she is resting in the Cape Cod harbor where the foundational document, the Mayflower Compact was written which is shown next to the iconic Plymouth Rock.

A shallop is carrying some passengers to their new land. The front of the float is covered with vegetation symbolizing the bounty of the survivors first harvest, which lead to the first Thanksgiving.

You can follow the float’s building process here, on Facebook. and on Wilder-Tamme’s blog, where she intends to add pictures daily.

“My husband, Bill, and I, along with other friends are going to be ‘Petal Pushers’ gluing flowers and seeds on the float,” she said. “It requires about 7,000 volunteer hours to build the float.”

What Most People Don’t Know About the Pilgrims

The many activities in Pasadena, California surrounding the Tournament of Roses Parade (presented by Honday) will increase public awareness of the inspirational story of 102 passengers who sailed the Atlantic. 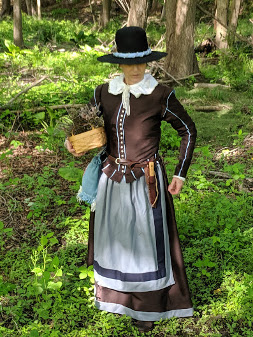 They established a colony with religious and civic freedom and wrote the Mayflower Compact, which was the basis of American democracy and influenced the U.S. Constitution, all while wearing colorful 17th century clothing and hats without buckles!

What comes to mind when you read the phrases: 57-year treaty with the Native Americans, landed on Cape Cod, and colorful clothes? It should be the Mayflower passengers!

Sadly, lack of research (fake news), and incorrect history that has been taught in grade schools across the country has misrepresented a Mayflower story that should be commemorated.

As a matter of fact, there will be celebrations soon, since 2020 is the 400th anniversary of the Mayflower landing.

People often speak of the Puritans and Separatist Mayflower passengers as being a single group, but they were quite different.

In 1620, there were 37 religious Separatists, 65 adventurers and zero Puritans on the Mayflower that landed at Cape Cod. The men wrote the Mayflower Compact while still on the ship there, and then sailed on to Plymouth.

You can buy official lapel pins, Rose Parade coins, Pilgrim Memorial flowers, Mayflower label wine at the California Mayflower Society website , or make a direct donation there to help with fundraising for the project.

Honda is the primary sponsor of the Tournament of Roses Parade this year.