For those of you who have taken down your bird feeders this summer — a sincere thank you for caring about Connecticut’s birds.

— an announcement from the Connecticut Audubon Society, in a version published in GreenwichFreePress.com

But if you decide to do so, there are still a few precautions you should heed.

State environmental officials said today that the number of dead birds being reported in Connecticut has dropped to about a quarter of what it had been in recent weeks. 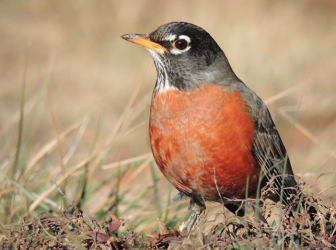 A male American Robin, Connecticut’s state bird and its most common bird

As a result, the Connecticut Audubon Society is joining the Connecticut Department of Energy and Environmental Protection in dropping its recommendation that people take in their backyard bird feeders and bird baths.

The decision is based on the drop-off in reports of dead birds as well as declines in the number of dying birds in other states where the die-off started and seemed to hit harder.

The condition that has been killing birds remains unidentified. It was first seen in spring in the Maryland-Virginia-Washington D.C. area and was ultimately reported in at least seven additional states. Because of concerns that the condition might be caused by an infectious disease, environmental officials and conservation groups recommended that people take in their bird feeders and bird baths.

It was a precaution meant to reduce the number of places where birds could gather close to each other. Connecticut Audubon and the CT DEEP made their recommendations on July 6.

In late July, three dead birds tested in Connecticut were found to have symptoms similar to those being seen in other states. Those symptoms were mainly swollen or cloudy eyes, and crusty discharges from the eyes.

• Clean feeders and bird baths with soap and water at least once a week, then disinfect with a 10% bleach solution to prevent potential infectious disease spread between birds and other wildlife.

• After cleaning, rinse well with water and allow to air-dry.

• When handling bird feeders and baths be sure to wear disposable gloves and wash your hands when finished.

• Avoid handling birds unless necessary. Dispose of dead birds in a plastic bag, seal, and discard with household trash. If handling is necessary, wear disposable gloves or use plastic bags on your hands to avoid contact with carcasses.

• Keep pets away from sick or dead wildlife.

Dead birds can be reported to the CT DEEP database.