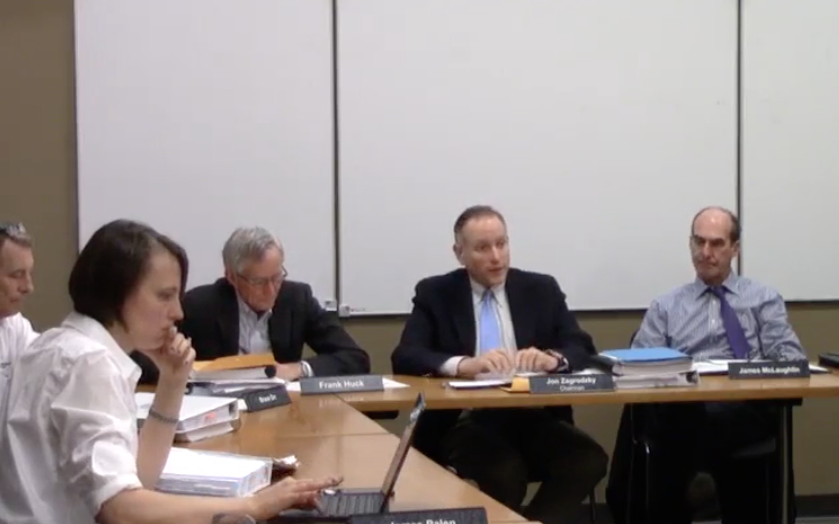 The Board of Finance approved a $145.3 million town operating budget and $6.7 million capital budget for the fiscal year starting July 1, which town officials calculate would lead to a new tax rate of $16.16 per $1,000 of assessed value — an increase of 2.46 percent.

Board of Finance Proposed Budget at a Glance

The budget was approved in a 5-to-1 vote, with board member David Lopiano saying he couldn’t support the budget after not having had adequate explanations for some of the spending from the school district Director of Facilities Michael Lynch and Jeffrey Adams, the town director of information technology. Board member James Palen was absent from the meeting.

Board Chairman Jon Zagrodzky said both the town and the school district put together very careful, thoughtful budgets that resulted in “percentage increases [in taxes] that are pretty small — and the smallest, except for one year, over the past seven years.”

But it will be more difficult to keep spending increases down as the state imposes costs on towns and cuts aid in order to get the state government’s own fiscal house in order, Zagrodzky said.

“I can tell you that the budget process is likely to be more difficult next year,” he said.

The budget now moves to the Representative Town Meeting for final approval. The RTM can cut budget items line by line in the non-education side of the town budget, and it can cut items from the capital projects budget, but the education budget would have to pass or be rejected as it is. The Board of Education could then propose another budget.

All the big items proposed in the Board of Education’s proposed budget were approved by the Board of Finance, including a plan for full-time department chairs for the high school and middle school, a $1.6 million project to renovate the high school cafeteria and a plan for an alternative middle school, which would start this coming fall in space leased from Darien Library (fewer than 20 students would participate in the alternative high school in its first year).

The budget, as passed by the Board of Finance, assumes that Darien will get the $2.3 million Excess Cost Reimbursement grant for education spending from the state government. The Board of Education had removed that from its proposed budget when the chances of Darien receiving the money looked bleaker.

Several board members said they were concerned about the proposal to make academic department chairman full-time positions (with some teaching responsibilities).

Board member Bruce Orr said he was concerned about that proposal as well as the proposed alternative high school:

I’m kind of lukewarm on that, but I feel that it’s been vetted thoroughly by the Baord of Education, so I’m going to support that. Long-term, I think that the alternative school that the Board of Education [is proposing] is conceptually the right thing to do, but I’m really not a fan of it as an experiment for the town of Darien.

I really would like to see more of a bigger plan associated with that, but that said, I’m still in favor of the entire Board of Education budget.

Other board members, including Zagrodzky, James McLaughlin, Frank Huck and Diana Maguire, said they were also uncomfortable with the department chairs proposal, but they would go along with the overall Board of Education proposed budget (like the RTM, the Board of Finance can’t cut line items from the education budget).

Maguire said she was concerned about the department chair proposal because “I didn’t feel like we had a really good sense of the metrics around what would measure success and what we would do if it turned out that it wasn’t a successful endeavor — what was the plan for pivoting?”

Several board members said they were impressed with the budget process the town conducted this year. On the town side, Maguire said, officials (the first selectman, town administrator, department heads and Board of Selectmen) were careful “to review and vet their budgets.” Orr said he thought school district officials and the Board of Education had also done a careful job, overall.

McLaughlin said that even with new spending proposals, the school district’s proposed budget was very low, in part because the administration had found places to save money.

“I have a little nervousness around the department chair issue,” said Huck, “but I have a great deal of confidence in the school [district] administration and the leadership of the Board of Education.”

Lopiano said he had requested information from both Lynch and Adams but got “very little or no supporting documentation” for budget requests.

He said he was voting against the budget proposal because “I think it’s important to make this a strong message: This is not to be tolerated moving forward.” Since the board voted only once in a single resolution on the entire set of budget proposals, Lopiano was on record as rejecting the whole thing.

Zagrodzky said he wants to work with Lopiano and other town officials in upcoming months to come to an understanding about providing information to the Board of Finance.

Zagrodzky also said that in general, town officials should be developing relationships with each other to keep lines of communication open between the town bodies that pass the budget and the Board of Education and town officials who propose it. That’s the best way to make good decisions with the least fuss, he said, adding that with state aid diminishing, Darien town government is going to need to make much more difficult decisions about taxes and spending starting next year.