You know what police say about locking your car at night. It applies to schools, too.

A burglar alarm at Middlesex Middle School got police to the scene, and quick enough for them to see two people through a second-floor window, but both ran through the building and escaped, police said. 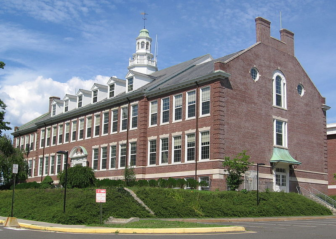 After police spotted the people in the building, a police dog and several more officers were called in to search the school.

Police were alerted to the hijinks by the alarm at 11:32 p.m. on Friday, the day after Thanksgiving.

Police did not mention anything stolen, but officers outside the building found three windows were broken in a first-floor classroom.

A surveillance video recording showed that the two individuals (not described in any way by the police announcement), entered through an exit door which apparently set off the alarm, although the door itself was unlocked.

The surveillance video showed that the two people rushed out of the building and from the school grounds once officers arrived.

Police were still continuing to investigate the incident as of last Thursday.