The Darien Republican Town Committee has rejected promoting a veteran official in the town Registrar’s Office to take over after John Visi retires on May 31 as GOP registrar of voters.

Angie DiMeglio, a 16-year veteran of the office who didn’t get the Town Committee’s nod, is quitting as of Thursday. The RTC has chosen someone who is said to have no experience in the job with less than three months to go before a primary election.

A caucus for all registered Darien Republicans is scheduled for 6 p.m., Monday, May 22, in Town Hall to vote on the Town Committee’s endorsements for the registrar’s position and a small number of other elective town offices.

After interviewing candidates for the elective office, a Republican Town Committee panel has recommended Cara Gately to replace Visi. Gately, a corporate lawyer who works at Nedder and Associates in Darien, is expected to resign her seat on the Darien Planning & Zoning Commission to take the job. 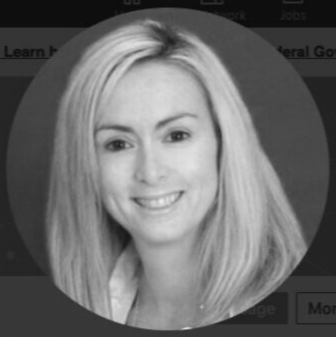 The GOP caucus is scheduled for 6 p.m., this Monday, May 22, and is open to all Republican voters in town. Voters won’t need to stay for the full meeting; they can leave once they’ve voted. Candidates can petition for a primary, but DiMeglio said she won’t.

The Registrars Office runs elections in town, trains volunteers and maintains the roll of registered voters in town. It has four employees — two Republicans and two Democrats.

In less than three months, on Aug. 9, the office will be in charge of running the primary election in Darien for whatever state or town candidates enter it.

“She’s had no experience, so it’s going to be difficult for her” to run the primary election, Visi said of Gately. Learning the state’s election regulations “just takes time,” he said. “I’m here to assist her in any way, but she’s brand new to it.”

UPDATE: RTC Chair Rachel Taylor emailed a statement (published in full at the bottom of this article) from the Darien Republican Town Committee. This passage addresses Gately’s experience and how it relates to handling the registrar’s job. It points out that Gately’s work as a corporate lawyer has involved in navigating various kinds of government bureaucratic hurdles and her experience on the Planning and Zoning Commission has some relevance to work done by the Registrars of Voters Office.

Here’s the passage from the RTC statement:

“A lawyer with extensive experience with regulatory compliance, processes and procedures, Gately has worked in many high impact settings including for the U.S. Securities and Exchange Commission, New York Regional Office, and has extensive experience with FINRA, the CFTC and other state and federal regulatory bodies. This experience will aid our town in the necessary and frequent interface which is required with the State Elections and Enforcement Commission and the Secretary of the State.

“Gately is also extremely well versed in regulatory, legal and legislative policy changes which frequently come from the state. Additionally, her relevant and directly correlating experience as a three-year Planning and Zoning Commissioner will benefit the town since the ROV’s role is required to further track ongoing development and an increase in new residents, along with pursuant census changes and changes to voting districts.”

DiMeglio said she decided to leave the office because “I felt that it would be too hard for me to stay, having a new boss taking John Visi’s job.”

With her experience in the office, DiMeglio said, she had expected to get the job, and assistant registrars typically replace registrars when registrars retire.

She said that the Town Committee member who told her she didn’t get the endorsement didn’t say why. The person “just said that they went with another candidate.”

DiMeglio said she hopes another job in town government opens up. “I hope to be moving on to another department, in time, but I may not get another position, so I may just be home, not doing anything.”

Reached by phone late Friday afternoon, Gately said only that she is the town committee-endorsed candidate and that the announcement for the caucus had been made in the Stamford Advocate at some point. (Darienite.com could not find the notice in the Advocate, either in print or online, or on the town party’s website or its social media accounts.) Gately refused to answer any other questions.

Rachel Taylor, chair of the Republican Town Committee, could not be reached for comment late Friday afternoon or early Sunday evening. Voice messages from Darienite.com were left on her phone.

Trump supporters in the Republican Party have been actively questioning and criticizing the handling of elections in various states. In Darien, the two Republicans who, with Democrats, handled town elections won’t be in office when the next election is scheduled to take place three months away.

Taylor and her husband, Chris (a previous GOP Town Committee chair), wrote a letter to the editor, published Jan. 12, 2021, about the Jan. 6 riot at Capitol Hill in which they condemned the rioters and those who encouraged them, including Donald Trump:

“The heinous actions of these lawless marauders on January 6th were reprehensible and unforgivable. As lifelong Republicans, we condemn the attacks of these far-right extremists whose ideals were fanned by false hopes from reckless pundits and many levels of the party — including President Trump.”

Their letter went on to state:

“In Darien, we are fortunate to have local leaders and town volunteers who operate effectively with a clear and cooperative vision, honesty and mutual respect — even when we may happen to disagree. We are lucky to have such civil, responsive and capable governance in our small town. At the end of the day, we are all neighbors within this small community and thankfully we doubt we could find one member who would condone the attack that occurred on Wednesday of last week.”

UPDATE: In an interview Monday, Rachel Taylor said she stands by everything she and her husband said in the letter published on Jan. 12, 2021. She also said that Darienite.com will receive announcements when GOP caucuses will be held. She said the caucus was announced May 13 in the Stamford Advocate and that week on Darien Patch. She emailed Darienite.com a statement released Monday by the town committee and a statement by Gately. Those are published below, at the bottom of this article.

According to a Web page on the Nedder & Associates website, Gately has been an associate attorney at the firm since 2020 after having been a senior counsel at Royal Bank of Scotland and RBS Global Bank.

“Mrs. Gately was drawn to Nedder & Associates because she, too, is a resident of Darien and loves helping families and businesses in her local community,” according to the brief biographical statement.

She graduated from Providence College and received her law degree from St. John’s University School of Law.

These are the full texts of two statements, both sent together by Taylor in an email to Darienite.com at 11:26 a.m., Monday (the statements are published here, word for word, but with style changes, for example, “three” for “3”):

“Recently, 10-year veteran Town Registrar John Visi made his intentions to retire known to his employers at Town Hall and to the Republican Town Committee.

“In a traditional process wherein multiple candidates are interviewed for vacant town positions, two candidates came forward with interest in serving as the next Republican Registrar of Voters.

“The Republican Town Committee, composed of 21 members, voted in support of Cara Gately to become the next Republican Registrar of Voters candidate for this year’s upcoming election.  A lawyer with extensive experience with regulatory compliance, processes and procedures, Gately has worked in many high impact settings including for the U.S. Securities and Exchange Commission, New York Regional Office, and has extensive experience with FINRA, the CFTC and other state and federal regulatory bodies. This experience will aid our town in the necessary and frequent interface which is required with the State Elections and Enforcement Commission and the Secretary of the State. Gately is also extremely well versed in regulatory, legal and legislative policy changes which frequently come from the state. Additionally, her relevant and directly correlating experience as a three-year Planning and Zoning commissioner will benefit the town since the ROV’s role is required to further track ongoing development and an increase in new residents, along with pursuant census changes and changes to voting districts.

“While both Mrs. DiMeglio (current deputy registrar) and Mrs. Gately brought forth important, differing and complementary experience for consideration, it was determined after lengthy discussion by the body that Mrs. Gately was the more qualified candidate.

“We are grateful for the lengthy service that Mr. Visi and Mrs. DiMeglio have provided for our town. While we regret that Mrs. DiMeglio has opted not to stay on in her current roll to help carry the office into the future, we wish her all the best in her new job in the Town Tax Office. Additionally, we wish Mr. Visi well as he steps into his next chapter to enjoy retirement with his wife and family,” stated RTC Chairman Rachel Taylor.

“I deeply appreciate the Darien RTC’s endorsement for this important position. The integrity of elections and ensuring that every voter has their voice heard is crucial to ensuring freedom and functional democracy. I am deeply indebted and grateful to Mrs. DiMeglio and Mr. Visi for their years of service and for their dedication and hard work on behalf of the town of Darien. They have ensured our elections have run smoothly and fairly. I look forward to working with my counterparts Susan Grey and Corey Frate and all those in the ROV office as we continue this vital work, “ stated Cara Gately. 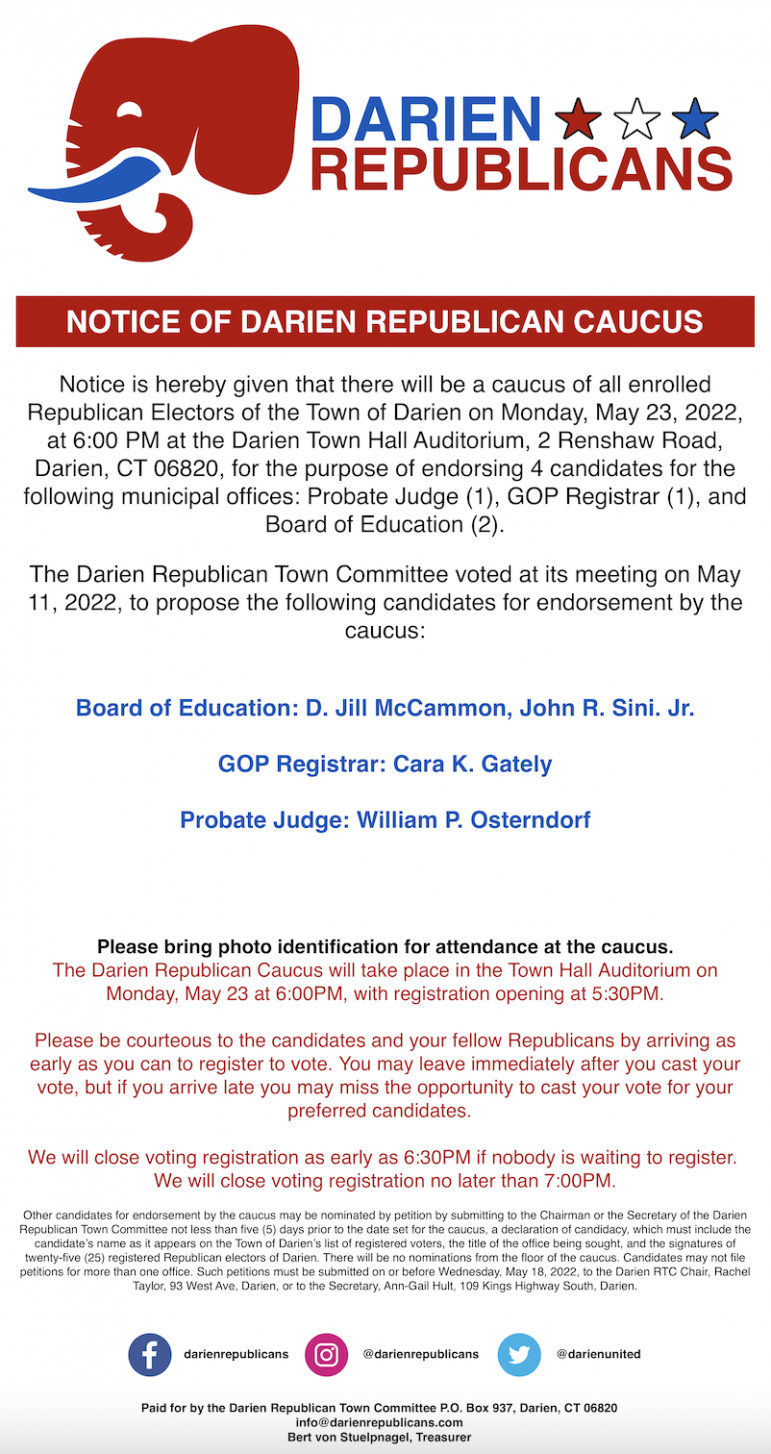 This image was emailed to some Republicans in town. It appears to be an advertisement, possibly the one said to have been published in the Stamford Advocate.