Americares has medicines and relief supplies on the way to Haiti for survivors of Saturday morning’s 7.2-magnitude earthquake.

A shipment carrying 9 tons of intravenous fluids is headed to earthquake-damaged Les Cayes, and Americares relief workers in Haiti and the United States are preparing additional shipments in the coming days to supply health workers treating the injured with antibiotics, wound care supplies and urgently needed medical supplies. 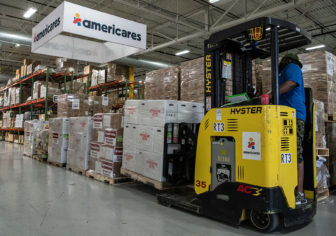 File photo: Supplies on the move in the warehouse at Americares world headquarters on Hamilton Street in the Glenbrook section of Stamford.

Americares relief workers on the ground in Haiti are assisting the local response, and the health-focused relief organization plans to deploy additional staff in the coming days to support the relief efforts.

The U.S. Geological Survey reported a 7.2-mangitude earthquake at 8:29 a.m. local time in the southwestern part of the country, 78 miles west of Port-au-Prince—slightly stronger than the 2010 Port-au-Prince earthquake that devastated the country. Aftershocks as strong as 5.2 continued throughout the day and early reports from the region indicated major destruction in Jeremie and Les Cayes. By late afternoon government officials were reporting at least 277 people had died and hundreds more were injured or missing.

“Survivors need immediate medical care for broken bones, lacerations and other wounds,” she said. “We are getting requests from hospitals and health centers throughout the affected region in need of medicine and supplies.”

Americares has worked in Haiti since the 1980s, supporting health centers and local organizations with donated medicine and medical supplies both in response to emergencies and ongoing needs.

Over the years, Americares has responded to the 2010 Port-au-Prince earthquake, Hurricane Matthew in 2016 and, most recently, the COVID-19 pandemic in Haiti.

Americares responds to more than 30 natural disasters and humanitarian crises worldwide each year, establishes long-term recovery projects and brings disaster preparedness programs to vulnerable communities. Since its founding more than 40 years ago, Americares has provided more than $19 billion in aid to 164 countries.

Donations to Americares Haiti 2021 Earthquake Relief Fund will support its response to the crisis. To make a donation, go to www.americares.org/HaitiEarthquakeFund.