A Bridgeport-based portable restroom company and a Southport law firm with a Darien office are hosting a golf tournament Monday, Aug. 23, with all proceeds being donated to the Darien-based HonorBound Foundation, which assists veterans.

The Customer Appreciation Golf Tournament , will be played at the Silvermine Golf Club in Norwalk.

— an announcement from A Royal Flush

The co-hosts of the event are the Butler Tibbetts law firm of Southport and Darien (where Alfred Tibbetts of Darien is a founding partner) and A Royal Flush of Bridgeport.

Since its founding in 1978, HonorBound’s mission has been to provide immediate assistance to U.S. military veterans and their families during times of crisis. 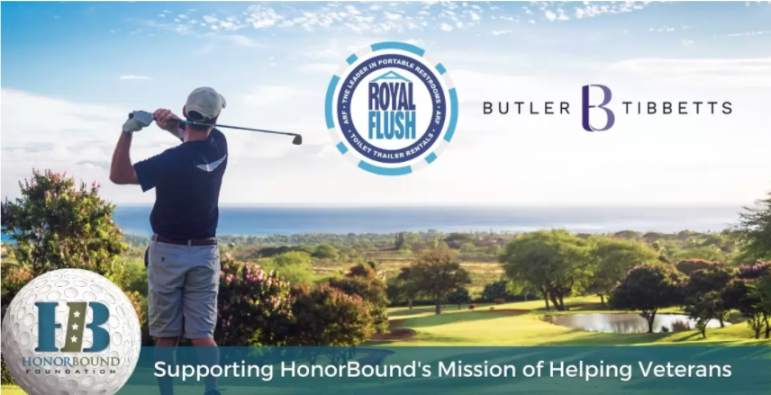 “What a great way to celebrate with our loyal clients and raise money for a cause that we are very passionate about,” said Tim Butler, principal owner of A Royal Flush.

HonorBound works with a nationwide network of social workers to identify and support veterans who are struggling to rejoin civilian life after completing military service.

To date, the nonprofit has helped nearly 23,000 veterans and their families in all 50 states.

A Royal Flush has its own military connection. The ownership and management teams at the portable restroom company are staffed by three generations of U.S. Marine Corps veterans. The family-owned and -operated company makes it a priority to consider veterans for positions at all employment levels.

“We’re looking forward to a great event and strengthening our commitment to the many military heroes in Connecticut and other areas of the country,” Butler said.

Butler Tibbets, formerly Tibbetts Keating & Butler, LLC had a Darien office at 43 Corbin Drive until recently. The firm recently moved its headquarters to Southport and moved its Darien office to 5 Brook St. There’s also an office in Midtown Manhattan.

A Royal Flush provides portable toilets to construction companies, event organizers and municipalities. It also provides hand sanitizer stations, hand washing stations and sanitizing services. The company has been headquartered in Bridgeport for more than 29 years.

During the COVID-19 shutdowns of 2020, the company was a front-line service provider for regional hospitals, law enforcement offices, fire stations, testing centers, schools and municipal buildings.