A mixed bag of meets this week put Darien gymnasts in the middle of the pack heading into FCIACs this coming Saturday, Feb. 15, but as Coach Judy Zakim said in an email, “I have every reason to believe that we will qualify.”

If the team does (when it does), the return of co-captain Kerry McDermott, injury-free, is sure to help, and morale is great, as usual.

— This article, by Holly Russell, is from the team.

Battling Wilton on Tuesday, Feb. 4, Darien fought but not hard enough, taking home a 128.55 to the Warrior’s 136.3 despite some personal successes by the team.

Most notably, freshman top-scorer Olivia Perkins vaulted her way to a 9.15, her highest vault score this season and the highest score any Darien gymnast has yet to earn in 2020.

Perkins’s all around score came in at 34.3 seconded by co-captain Lana Schmidt’s 32.75. Sophomore Maggie Russell’s 30.3 completed the triad.

“No Fear Of Flying,” said the banner running across Wilton’s gym wall. On floor, Schmidt showed she knew what that meant with a swirling roundoff back handspring back layout full twist. 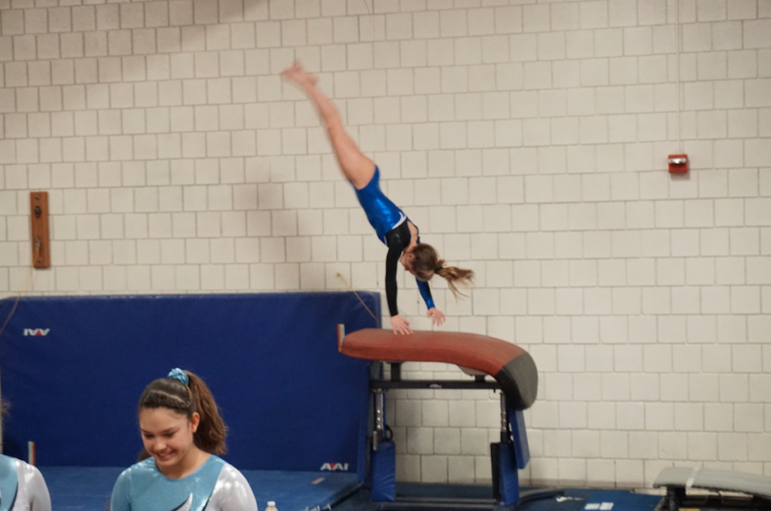 Abby Kissko makes waves with her vault in Wilton.

Performing her vault tsuk, Perkins also faced fear and tossed it aside, storming down the runway building speed to leap onto the vault, flip straight-legged into the air, and land backward facing the horse to make her record score.

Junior Lucy Collins connected her kip with her dismount on bars, a proud moment, while freshman Abby Kissko also soared when for the first time she stuck her half on, half off on vault.

On beam, sophomore Sommer Schmidt has been working on her mental game. That’s key in gymnastics. “I go for it now,” Schmidt said. “I don’t wait anymore.”

The Wave rolled into Saturday’s home meet against Staples and Norwalk high schools with the same optimism.

With a strong 6 on bars freshman Alex Decsi turned in points, too. So did Russell, in addition to sophomore Megan Culter’s serene floor (7.45) and beam (7.9) routines. Against Greenwich Jan. 30 junior Lauren Grandon hurt her ankle doing a layout on floor.

At home this Saturday, recovered, she charmed onlookers with the same layout and added 7.3 to the team score. Freshman Mia MacDonald’s bar work was also a plus. 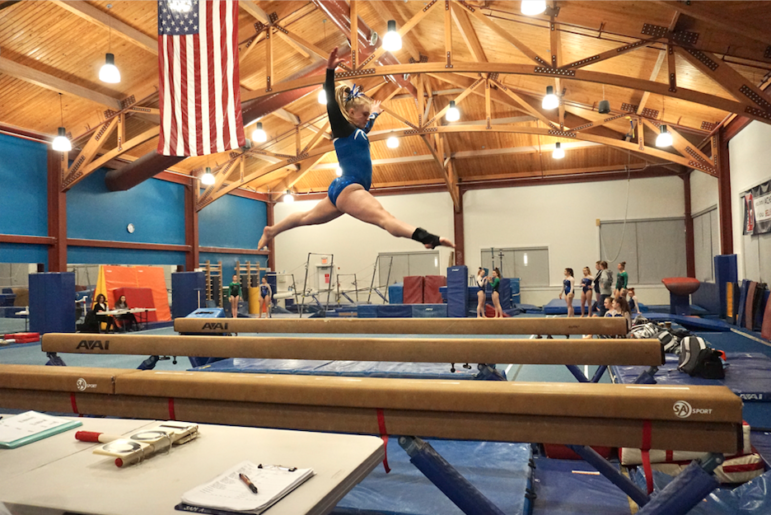 Teamwork. Sportsmanship. Positivity. These terms define every Wave gymnast, but none more than co-captain McDermott, who showed her skills as well as leadership at home this week.

“It was great to finally be back competing,” she said, “but more important, to start contributing points to help our team score.”

An unforgettable double back walkover on beam accompanied by a split leap tuck  three-quarter awarded her an 8.2 that boosted team points and sent a definite message along with her 8 on vault and her bars performance.

“She’s back. It’s great,” said teammate Russell. “She’s a strong gymnast and was such a big support when she wasn’t competing. It’s nice to support her, now.”

Editor’s note: The links are to definitions of some of these gymnastics terms. Some links are side-by-side, so what looks like one link may be two.