You know those big brown trucks that are keeping us well-delivered during this time of COVID-19? Well, there’s some interesting history and tech to United Parcel Service, or UPS.

Founded as the American Messenger Company in Seattle in 1907, the company made most of its deliveries back then to stores, not customers, and made them on foot or by bicycle. Adding a Model T to their fleet in 1913, the company started serving neighborhoods.

By 1930 the company expanded to most cities in the East and Midwest, adding delivery by airline cargo partnerships to their modes of transportation.

From 1975 to 1982 UPS was headquartered in Greenwich and was serving all 48 contiguous states and Puerto Rico. In 1988 UPS launched its own airline fleet, now the 10th largest in the U.S. and serving 815 destinations worldwide. 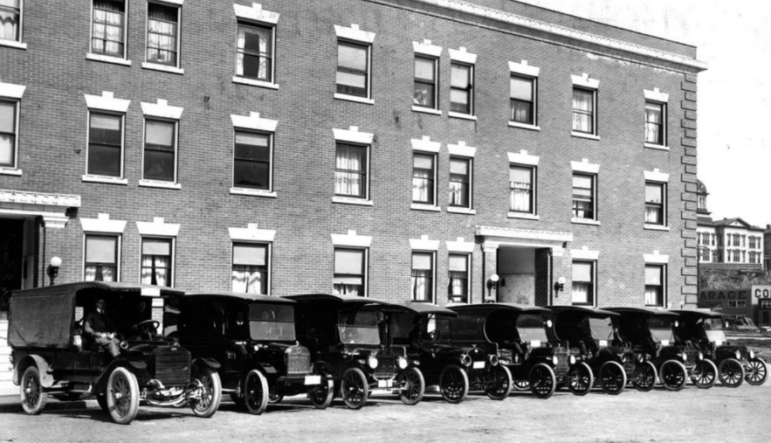 On Wikimedia Commons from UPS Archives

Merchants Parcel Delivery (UPS) fleet of vehicles in Seattle in 1916.

When a package enters the UPS system it goes first to the closest hub by truck or train (if less than 200 miles) or by air (if farther). After an initial sort it then goes to the hub nearest the final destination.

The facility can sort 416,000 packages an hour. Processing time is about 10 minutes per package. It is heavily automated, boasting 33,000 conveyors covering 55 miles in length.

The packages are then shipped again to the hub nearest the destination and trucked to local warehouses, such as the one in Norwalk.

Here’s where more serious technology comes into play, with a system called ORION, On-Road Integrated Optimization and Navigation. The software has 80 pages of algorithms combining maps, customer information, traffic conditions, pick-up requests and package priorities to give each driver the fastest route to complete deliveries.

UPS even has its own GPS system giving its drivers detailed information about each destination. As the driver gets close to the drop-off location the system beeps, telling him to slow down.

When the big brown truck pulls up in front of your house to make a delivery, you’ll notice the driver usually stops the engine. He doesn’t stroll to your door, he jogs. With hundreds of deliveries per day per driver, it all adds up.

Sometimes the driver needs you to sign to accept the delivery. Even that involves some amazing tech: DIAD, the Delivery Information Acquisition Device, a 1.3 pound handheld computer that scans barcodes, collects signatures and stores information about each package. (Delivery signatures are now on hold thanks to COVID-19). 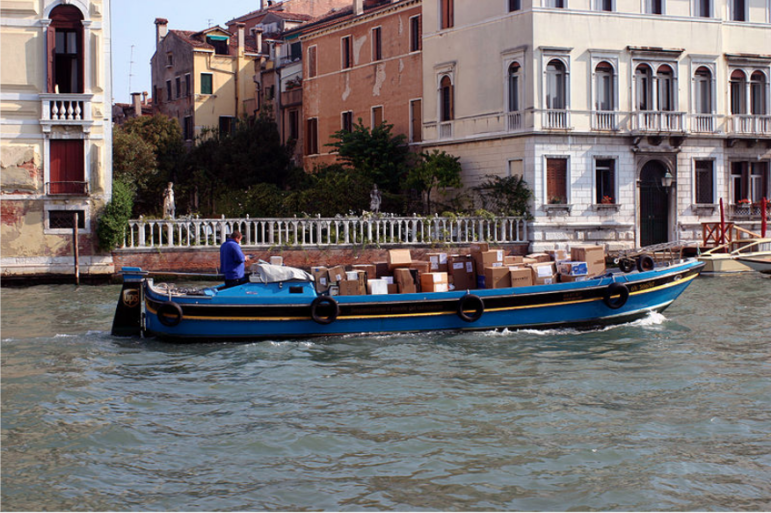 UPS Delivering on the Grand Canal in Venice

Today UPS is busier than ever but has also suspended its delivery guarantees due to “service disruptions.” They are not alone in that situation as competitors FedEx and the US Postal Service are also struggling to keep up.

It’s clear that sheltering in place is good for UPS’s business if it can handle the load. In fact, UPS is still hiring new workers.