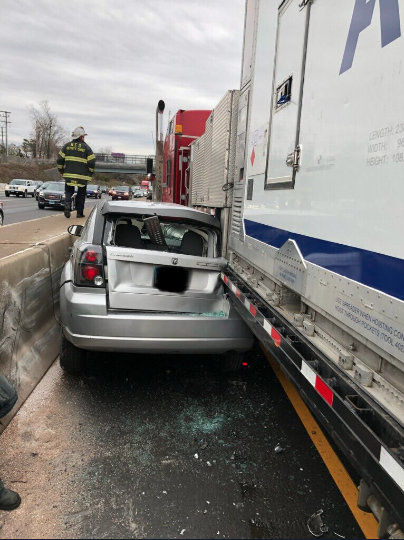 New research from the AAA Foundation for Traffic Safety reports that of Washington state drivers involved in fatal crashes, the percentage who tested positive for active THC doubled since that state legalized pot in 2012. 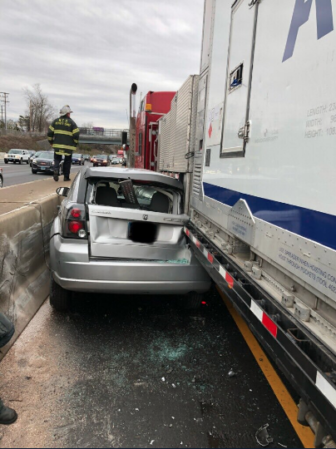 It’s all fun and games till the truck … (file photo from a traffic accident in which marijuana was NOT known to be a factor or even in the blood of anyone involved — hey, it’s a great picture! You know you’re glad you saw it!)

“AAA’s message is if you’ve used marijuana, don’t drive,” she said. “And if you plan to drive, don’t use marijuana.”

The latest Foundation research reports nearly 9% of drivers involved in fatal crashes were positive for THC between 2008 and 2012 — the five-year period before the drug was legalized in Washington State. That percentage rose to 18% between 2013 and 2017, the research reports.

This research doesn’t attempt to determine if marijuana use contributed to the crashes — only the prevalence of active THC among drivers in fatal crashes.

Eleven states and Washington, D.C. have legalized marijuana for both recreational and medical purposes, while another 22 states have legalized it for medical use only.

This year, many states — including Connecticut, where medical marijuana is legal – will consider recreational marijuana legislation.

“The results are concerning because the analysis suggests legalization of recreational marijuana may contribute to an increase in the rate of THC-positive drivers involved in fatal crashes,” Mayko said.

Marijuana use can inhibit concentration, slow reaction times and cloud judgment. Several studies have concluded marijuana-impaired drivers are up to twice as likely to be involved in a crash.

States that have legalized cannabis shouldn’t rely solely on arbitrary legal limits to determine driver impairment, says AAA, because no data reliably shows what level of THC impairs driving, the chemical’s effects vary by user, and THC testing often can’t be performed until hours after a crash.

Instead, the auto club recommends states adopt a two-pronged approach that requires both a positive test for recent marijuana use and behavioral/physiological evidence of driver impairment.

AAA is committed to educating the public about the risks of substance-impaired driving. AAA Northeast currently presents a comprehensive, free program to high school health classes about the impact of cannabis on driving.

Visit www.aaa.com/shiftinggears for more information and to register for the presentation.