Scott Hapgood and his family filed a lawsuit Monday against the owner of the Caribbean resort where Hapgood fought against a hotel employee he said assaulted and tried to rob him last April in front of his children, Hapgood’s public relations firm announced. 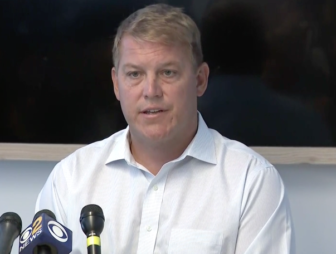 Scott Hapgood at a news conference.

Hapgood, charged with manslaughter in the death of the Anguila hotel employee, Kenny Mitchel, has remained in the United States, refusing to return to the island for pretrial court hearings.

He has said it would be too dangerous for him to return to Anguilla, a British territory, given numerous anonymous threats against him and a lack of assurances from Anguilan authorities that he would be protected.

Anguillan authorities have said they would file an arrest warrant for failure to appear in court. Extradition between the United States and the United Kingdom involves approval from both a federal judge and the U.S. Secretary of State. President Trump has indicated he supports Hapgood.

Hapgood himself has been sued in Connecticut by Kenny Mitchel’s family.

The lawsuit was filed Monday in Marin County California Superior Court against Auberge Resorts LLC, a relatively small resort company based in Mill Valley, California, a suburb of San Francisco.

Here’s the announcement from the public relations firm, Infinite Global:

Scott Hapgood and his family filed a lawsuit today against Auberge Resorts LLC, operator of the Malliouhana resort in Anguilla, seeking to hold it responsible for the attack Scott suffered in his hotel room at the hands of one of its employees.

The lawsuit, filed in Marin County California Superior Court, alleges that Auberge Resorts was negligent in the hiring and supervision of its former employee, Kenny Mitchel, who violently attacked Scott on April 13, 2019.

The attack has led to a meritless and costly criminal prosecution against Scott, an ongoing suspension from his job, and to Scott, his wife and three children suffering from emotional distress.

The lawsuit asserts that less than three weeks before the attack Mitchel had been arrested and charged with rape, and that he violated one of his bail conditions and spent additional time in police custody.

The lawsuit also notes that Mitchel was a national of a neighboring island — Dominica — and the criminal charge should have rendered him ineligible to continue his employment on Anguilla. Auberge Resorts knew or should have known these facts yet kept him on the job anyway, around hotel guests including children, according to the lawsuit.

The lawsuit also asserts that on the day of the attack Mitchel showed up to work more than two hours late and disappeared for more than an hour in the middle of the workday, later appearing at the Hapgoods’ hotel room drunk and high on cocaine.

Mitchell claimed that he came to the Hapgoods’ room to fix a broken sink. Since Mitchel was wearing the uniform of the luxury resort, Scott allowed him in.

In fact, there was no “broken” sink, and, after pretending to inspect the sink, Mitchel drew a knife, demanded money, and then attacked Scott. Seeking to defend himself and protect his minor daughters who were in the room at the time of the attack, Scott restrained and disarmed Mitchel. The girls fled the room seeking help. But instead of calling the police and an ambulance immediately, Auberge delayed.

After the hotel’s security guard finally arrived to the room, he took over from Scott to restrain Mitchel until the ambulance belatedly arrived. Tragically, Mitchel died in the hospital almost an hour later from an overdose of cocaine, according to the toxicology report produced by the Anguillan authorities.

Anguillan authorities charged Hapgood with manslaughter, and he was ultimately released on bail. Hapgood returned to Anguilla on several occasions to face the preliminary proceeding, which Anguillan prosecutors continued to pursue despite the evidence that a drug overdose killed Mitchel.

Editor’s note: This article was last updated at 11:42 a.m. The time stamp has been changed for layout purposes.