Darien Police Lt. Alison Hudyma, a 21-year veteran of the Darien Police Department has been promoted to the rank of captain, effective March 20, the department announced. 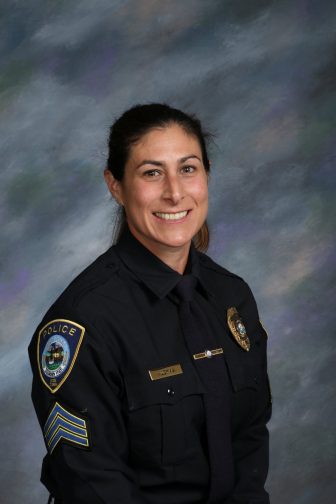 Alison Hudyma’s promotion to captain is official as of March 20.

Hudyma has been with the department for 21 years. She graduated from the Connecticut POST-C Police Academy in 2000.  After serving for 11 years as a patrol officer, she was promoted to sergeant in 2011 and lieutenant in 2019.

“Capt. Hudyma has proven herself to be dedicated and valuable member of the Darien Police Department for over two decades,” Police Chief Don Anderson said.

“Her promotion to the rank of Captain is certainly well-deserved,” Anderson said, “and I am highly confident in her ability to continue to provide professional service to all residents and visitors to the town of Darien in her new assignment.”

Hudyma worked in both the Field Services Division and the Training Division, as both an officer and supervisor, and is currently serving as the training lieutenant.

She currently is a board member for the Darien Domestic Abuse Council, a nonprofit group raising awareness for Domestic Violence victims in Darien and also serves on the Lethality Assessment Program Advisory Committee for the State of Connecticut.  She is a member of Cops & Kids and helps administer “Respectworks,” in conjunction with Darien High School and Depot Youth Center.

“Capt. Hudyma follows in a long line of quality and dedicated officers,” Darien Police Commission Chair Kim Huffard said. “I feel extremely confident the Department is in good hands with the addition of Capt. Hudyma to the administrative ranks.”

The police announcement said: “On behalf of the entire staff of the Darien Police Department, we offer our sincere congratulations to Captain Alison Hudyma on this well-deserved promotion.”