CT BUS RIDERSHIP HITS NEW RECORDS: Congratulations to Greater Bridgeport Transit for hitting a new record for ridership, higher even than pre-COVID: almost a half-million trips were taken in September.

Of course, this surge in ridership coincides with free bus fares since April when the “gas tax holiday” went into effect. What happens Dec. 1 when that holiday is over remains to be seen. 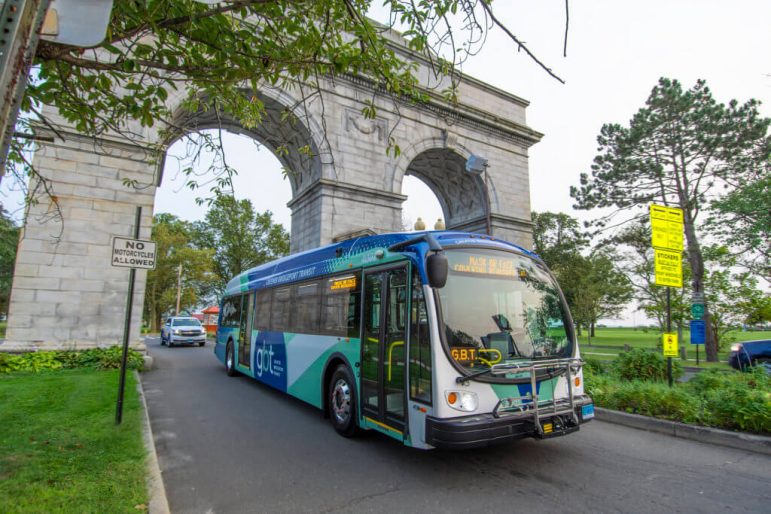 GBT’s other achievement is better productivity: They’re carrying more passengers per bus per hour than ever before. While this may be tied to faster boardings (because of no fare collection), it’s also a reflection of “right-sizing” routes, moving the buses where the passengers are: more buses = more service attracting more riders.

Surprisingly, the on-time performance has remained consistent despite more road traffic on the bus routes.

TRAIN RIDERSHIP STAGNANT: After seeing a small increase in ridership after Labor Day, Metro-North ridership has again plateaued. The busiest weekdays (Tuesday through Thursday) see an average of 71% of pre-COVID passenger loads. But weekends now exceed pre-epidemic numbers, even though the actual number of passengers is only half to two-thirds of the busiest weekdays — and all at off-peak fares.

Lower ridership means lower fare revenue and an uncertain future for the region’s mass transit after MTA and CDOT burn through federal bailout money next year.

MIDTOWN OFFICES HALF-EMPTY: The work-from-home phenomenon is still taking its toll on Manhattan real estate with only half of office workers back at their desks in midtown. Worsening the long term outlook, a lot of older offices can’t be rented, reducing the value of NYC real estate by $400+ billion.

AMTRAK RIDERSHIP STRONG: Expanded service on Amtrak in New England has found a new audience. Trains to the Berkshires, Vermont and into the Connecticut River Valley are often sold out. But with the high demand comes higher prices.

UNCLOGGING OUR PORTS: After a horrendous summer of backlogs at Los Angeles and Long Beach, California harbors, with cargo-laden container ships from Asia waiting weeks to offload, business is back to usual. Not because the port streamlined its logistics, but more because shippers diverted their cargos to other U.S. and Canadian ports, including the East Coast.

Lightening the load further were the Chinese COVID shutdowns and U.S. merchants discovering they had ordered far too much merchandise for the upcoming holiday season, even before the recession impacted shopping.

AIR TRAVEL GETS CROWDED: You thought the summer was bad for the U.S. airlines? Just wait till Thanksgiving and Christmas. Flights are still full and fares are not budging. That’s good news for the airlines but maybe not their passengers.

WIDER SEATS: Finally, a small piece of good news: low cost carrier Spirit Airlines is adding new, wider seats to their soon-to-be-delivered A320 aircraft. Not much wider —  just a half-inch — and achieved by making the seats thinner. The middle seat will be the widest, by an inch.