Do you ever wonder how trains move on a busy line like the New Haven division of Metro-North? How do they switch from track to track, make their scheduled stops and try to stay on schedule?

But until the 1980s, the dispatchers were decentralized, working in one-man towers along the line.

Each tower handled a section of track, manually throwing massive switches to send trains on their appointed routes following a master schedule.

Manned 24/7, a tower in Woodlawn handed off trains to a tower in Mount Vernon, then to New Rochelle, Rye, Greenwich, Cos Cob, Stamford and South Norwalk.

Bob Hughes worked in the SoNo Switch Tower for eight years, dispatching hundreds of passenger and freight trains on the mainline, many continued to the Danbury branch. 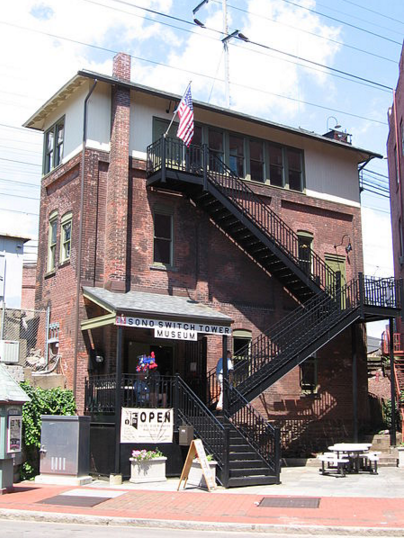 Built in the 1880s, the tower featured a 68-lever “Armstrong” machine, named because it required strong arms to move the manual switches using hundreds of yards of connected piping.

For his work, Hughes was paid $2.65 an hour with a two-cent-per-hour bump to operate the circuit panel for the 11,000-volt overhead catenary.

The tower also was equipped with a “model board,” showing the exact location of each train. As a train passed the neighboring tower (Stamford or Bridgeport), the dispatcher alerted Hughes to the train entering his territory.

A call like “BG-1 next on 1” would warn Hughes to watch his model board and prepare for that train’s arrival and possible switching to another track. As it passed, Hughes noted the locomotive number and time on a master log, and then warned the next tower about the incoming train.

Hughes also communicated with the nearby Walk Bridge tender who opened and closed the bridge as barges and sailboats requested.

“In those days, the bridge opened and closed without problem,” Hughes said. “Of course, it was 50 years younger then.”

In addition to the busy passenger trains on the then-New Haven & Hartford Railroad, as many as eight freight trains per day passed his tower.

“We tried not to slow up the freights to avoid brakes locking and similar problems,” he said.

It wasn’t until Penn Central took over the New Haven in 1969 when the trains got radios to communicate with the towers. Before then, engineers who were stopped at a red signal clambered down from their cabs and used a track-side phone to inquire about why they were being held up.

In 1984, the SoNo Switch Tower was decommissioned along with most of its sister towers as switching became computerized and controlled out of GCT. But the tower still remains open as a museum.

Operated by the Western Connecticut Chapter of the National Railway Historical Society, the museum is open from noon to 5 pm on weekends through October. Hughes is often there demonstrating the old switching gear.

Cameron on railroad history and fun:

2 thoughts on “The History Behind the SoNo Switch Tower Museum: Cameron on Transportation”