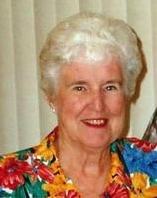 Janet Christie ,90, passed away on Sunday, July 17. A graveside service is scheduled for Thursday.

Janet Lawson Christie, 90, who resided at Maplewood of Darien, passed away peacefully on Sunday, July 17, 2016, surrounded by her loving family.

Janet Christie ,90, passed away on Sunday, July 17. A graveside service is scheduled for Thursday.

She was born on Nov. 17, 1925 in Stamford to the late Alexander Lawson and Martha Muir Lawson. Janet was a longtime resident of Darien as well as residing in Monroe, Newtown, Trumbull and Wilton.

She was the loving mother of William E. Christie, Jr. of Stamford, June M. Postolowski of Higganum, Janet C. Samperi of Monroe and Joyce C. Styslinger of Fairfield.

Also, she was the great grandmother of Sloan R. Stone of Redondo Beach, Ca. In addition to her parents, she was preceded in death by her beloved husband of 68 years, William Edward Christie, Sr. Her brothers, Robert Lawson and Adam Lawson predeceased her as well.

Janet began sewing and knitting at the age of eight. When she was 14, she received an award from the British War Relief Society for her work contributing articles of clothing made by hand or machine.

Throughout her life, she continued sewing and knitting items for friends and family, including dresses, sweaters, hats, scarves, and blankets. Janet was a longtime, dedicated volunteer at hospitals in Connecticut and Florida. She enjoyed her positions in retail and as an administrative assistant to a chief of surgery.

During her retirement, she enjoyed spending time at her homes in Woodford, Vt. and Barefoot Bay, Fl. Her interests included camping, playing pinochle with friends, and participating in a bowling league.

Traveling to Scotland, attending Scottish games at various locations, and viewing the Military Tattoo held a particular interest for her. She especially liked listening to the music of bagpipes and dancing the Scottish Highland sword dance in her younger days.

The family has chosen to have a graveside funeral service to honor her memory. It will be held at Fairfield Memorial Park, 230 Oaklawn Ave., Stamford on Thursday, July 21, 2016 at 11 a.m. The Rev. Jennie Davis from the First Presbyterian Church of Stamford will be officiating.

In lieu of flowers, the family would be grateful for contributions to Constellation Health Services, 14 Westport Ave., 1st Floor, Norwalk, CT 06851.