A historic win and a couple of school records highlighted the week in sports at Greens Farms Academy as the spring season kicked into full gear.

The boys lacrosse team defeated Hopkins 10-5 to notch their first win over the Hilltoppers in 22 years. 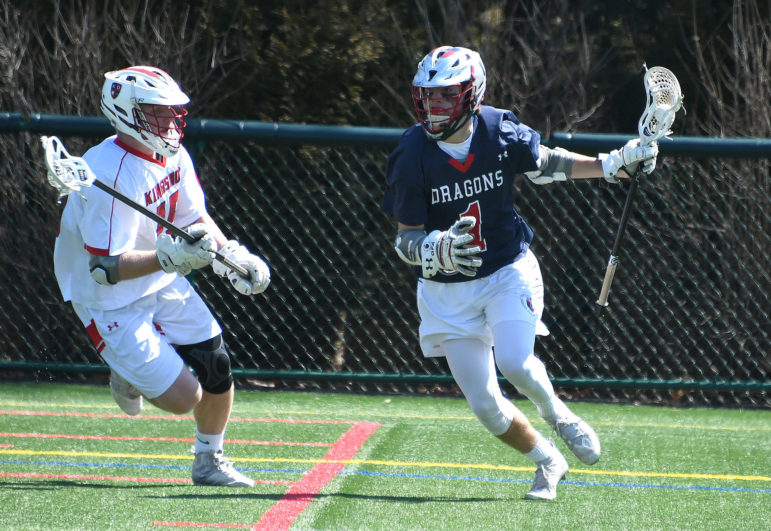 And the GFA track team saw a pair of records fall during a meet against Kingswood Oxford in the middle of the week.

Here is a rundown of the week:

Zach Liston (Wilton) and Charlie Benson (Darien) combined for nine of GFA’s 10 goals as the Dragons bested Hopkins for the first time in at least 22 years with the win on Wednesday.

Henry Mcdonald (Westport) also had a goal for the Dragons, who improved to 2-1 on the young season.

Ella Murphy (Darien) and Alex Nesi (Fairfield) combined for seven goals, leading the Dragons to their first home win of the season 16-4 over King.

Kelly van Hoesen (Greenwich) made six saves in the game while Kaitlin Reed (Southport) added one.

Later in the week, a balanced scoring attack led the GFA girls lacrosse team past Hopkins in New Haven on Wednesday 10-5.

Meg Nesi scored three goals for GFA while Murphy, Alex Nesi, and Peltier each had two goals to lead the Dragons.

Sarah Logan (Darien) added a goal and two assists while Raveis also had a setup.

Sophomore jumper Tim Northrop (Fairfield) cleared 6-feet, 2-inches in the high jump to set one new mark while Haley Nilsson (Fairfield) won the 1,500 in 5:25 to also break a record.

The other winner for the Dragons was Cassy Callari (Weston) in the discus (56-1).

Mary Kessler (Westport) led a 12-hit attack with three hits and two RBIs while Piper Dove (Norwalk), who led the game off with a triple, and Gabriele had two hits each.

The Dragons notched three hits and left three runners in scoring position against one of the top pitchers in the league in a 15-0 loss to Hopkins earlier in the week.

Park had two hits for GFA while Dove had the other. 15-0

The Dragons bested King 6-1 in a road match on Wednesday, pushing their record to 2-0 in the process.

The Dragons made the trek to Wooster and came away with a 6-1 win.

The Dragons won their second match in two outings with a 6-1 win over Christian Heritage on Monday.

GFA took three of four singles and swept the doubles in moving to 2-0.

The Dragons made the road trip to Hopkins and fell by a 6-1 score in New Haven on Wednesday.

Down a few players this weekend, the Dragons still had enough depth to post a shutout win at Millbrook.

Boyle stepped up to the No. 1 slot and earned a 6-1, 6-1 win to lead the Dragons. Bettegowda and Brawn broke up their doubles tandem and played singles, each winning, as well. At fourth singles, Allie Agnew (Westport) won by a 6-1, 6-1 score.

Sean Hogan (Westport) was 2-for-3 with two RBIs and a run scored. Ian Brown (Darien) also had two hits and scored a run.

In their first two matches of the year, the GFA golf team fell to two of the league powers by 5-0 scores.

Teddy Brown (Greenwich) won his match and Ian Epps (Darien) split his point as the Dragons fell to Hamden Hall on the road on Tuesday. 7.5 to 1.5

Brown shot a 49 to defeat his opponent with Epps firing a 43 to split his point.

Giani Panariello (Westport) also shot a 43, falling by a stroke in his match.

Despite having five of its six golfers shoot 44 or better, the Dragons fell to a very strong St. Luke’s team on Thursday at the New Canaan Country Club. 8.5 to .5

Epps and Eli Kennon (Greenwich) led the way with a pair of 40s for GFA. Piero Panariello (Westport) had a 42 while AJ Tenser (Westport) and Will Paliotta (Westport) each had 44s.

The Greens Farms Academy sailing team just missed qualifying for the O’Day Regatta by taking fourth place in this weekend’s qualifying race in Greenwich. The team missed making the finals by one spot, but still shocked the state’s sailing scene with a fourth-place showing.