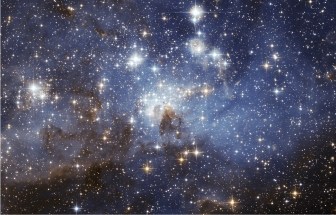 LH 95 star forming in the region of the Large Magellanic Cloud.

Often referring to himself as a misguided missile, Russ had a whimsical approach to life which brought much joy to those around him. Children especially loved his unusual taste in gifts for all occasions which were always fun and never practical.

Russ was born in Cleveland to Albert and Anne Harding. His Catholic education at St. Ignatius brought him to Cornell University where he studied pre-med, but he soon decided his passion was astronomy.

In true Russ style, he left Cornell and pursued a very broad education at schools in every corner of the country, including his undergraduate studies at Xavier University. Russ earned many degrees and worked as an adjunct professor at several colleges and universities.

Russ chased astronomical events across the globe before settling down as an astronomy educator at Middleburg Heights High School in Ohio, the McDonnell Planetarium in Saint Louis, and then opened the Gengras Planetarium in West Hartford. Russ moved to Darien and worked for Norwalk Public Schools until his retirement.

Russ skied throughout the United States and in various European countries. He owned and operated a ski house in Vermont for a short time and also dabbled in real estate and both foreign and domestic investments. Late in life he decided to learn Portuguese and struggled with the language on many trips to Brazil.

His generous support of a long list of socially conscious organizations, especially those that promoted peace and understanding as well as environmentally focused groups and those that deliver food and medical services to those in need, continues even after his passing. Russ was a unique individual who lived life on his own terms until his medical conditions set a new path for him.

Russ will be remembered for the special human he was and his friends are reminded of his nonsensical goodbye “Keep your tail light lit.” There is no doubt that somewhere the misguided missile is hurling towards his next adventure with tail lights blazing.

Russ is survived by Kathy Burns of Stratford, the Edward Crist family of Cleveland, John and Vicki Boccuzzi of Newtown and his many cousins and friends.

In lieu of flowers, please make a donation in Russ’s name to a non-profit of your choice which provides food or medical services to those in need.

A celebration of life will be held at 11:30 a.m., Oct. 15 in Newtown. Please respond to email russstar@juno.com if you would like to attend and we will forward further details by return email.

— This obituary was published by the Darien Times on Legacy.com, where online condolences may be left. Honan Funeral Home is in charge of arrangements.

— Editor’s note: Earlier versions of this obituary, published elsewhere, said the time of the celebration of life event was 11:30 p.m., but a check with the funeral home resulted in Darienite.com changing the time to a.m. (In an obituary for someone described as whimsical and so involved in astronomy, we weren’t sure.)