After hitting a parked car on Ledge Road just before midnight, Sunday, July 21, the driver repeatedly took the hand of the car’s owner and begged him not to call police, then she drove from the scene, Darien police said.

According to police, the owner said that the driver, later identified as Layli Harandi, 39, of Greenwich, had alcohol on her breath. The police report said her birth date was July 21, so that Sunday was her birthday. 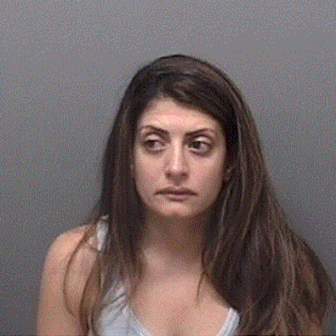 When police identified her (they didn’t say how or when), Harandi did not respond to telephone calls from them, police said. Police applied for and received an arrest warrant for the woman, who turned herself in at Darien Police Headquarters on Sept. 10, almost two months after the accident.

Just before midnight, the owner told police, he heard a loud crash outside his home. He went outside and saw a white Kia sedan had struck his vehicle, which was parked on the side of the road.

As he approached, Harandi got out of the car and talked to him about “taking care of the problem.” She grabbed his hand more than once and begged him not to call police. He did anyway, at midnight.

The man said her breath smelled of an alcoholic drink, her speech was slurred and she was stumbling when she walked.

She drove off before police arrived, and police couldn’t find her. Police were able to identify her, although they didn’t say how. Several times, they called her but got no response. The police officer who called her later (police didn’t say when) received a return call from a lawyer who said he or she was representing Harandi.

The lawyer told police that Harandi would not make any statements and that her vehicle was currently unregistered. Police applied for an arrest warrant, which was approved by a prosecutor and granted by a judge.

She wasn’t charged with driving while under the influence, police said.

“In incidents such as these,” according to the police announcement from Sgt. James Palmieri, a spokesman for the department, “police are unable to charge the suspect for DUI as they cannot testify that they personally observed the suspect show signs of intoxication, and are unable to give the opportunity for the appropriate on-scene field testing.”

Harandi, of Sound Beach Avenue in Greenwich, was charged with evading responsibility (leaving the scene of an accident), failure to drive in the proper lane and failure to insure a motor vehicle.

Police did not say they charged her for driving an unregistered vehicle.