Darien Library and the company that owns the office park at Thorndal Circle have agreed on a plan where more parking will be provided to library users during weekdays when the library lot fills up.

(When the library was moved from Leroy Avenue to its present location on the Post Road, library officials didn’t realize how much more popular the new building would be. More people came to use the library, which meant that when there were particularly popular events being held, the parking lot filled up to an extent that officials hadn’t predicted, library officials have said in the past.)

For about 10 years, since the library moved to its current location, there’s been an agreement that library users could park in lots at Thorndal Circle on evenings an weekends, library Director Alan Gray said at a recent Planning and Zoning Commission meeting. The commission approved the plan in a unanimous vote.

The new agreement, he said, would allow for the use of 60 or so spaces at certain parking lots in the office park during the day on weekdays for those few times a week when library events become so popular that the library lot, with 181 parking spaces, gets filled up.

The library already uses about 15 spaces in the Thorndal lots for library employees, Gray said, so the extra parking on weekdays would amount to about 45 more spaces for library users.

“The 45 spaces that are additional is really […] a number that we’re not going to get close to, except in extraordinary circumstances,”  he said.

In order to help library users to get from the parking lots to the library, the library and the office park business asked the Planning and Zoning Commission on Tuesday to permit a change to the site plan for the park to allow as many as three sidewalks on the business’s property: Two (parallel to each other) just north of Darien Police Headquarters property would extend to Hecker Avenue, and another farther inside the office park.

The sidewalks would have bollards with lights for people walking in the dark, the commission was told.

“I think the farthest you would have to walk — as I understand it, Google Maps says it’s like 880 feet,” Gray told the commission.

The Thorndal Circle Office Park is owned by the Nielsen Company, run by former Selectman Gerald Nielsen Jr., and located behind Nielsen’s Florist and Garden Shop on Thorndal Circle, off the Post Road.

The property includes a building in the far back that has been used as a data center, although it’s currently not being used, P&Z Chairman Stephen Olvany said. Even when it was used, only about six employees were working in the 52,000 square foot building, he said.

If more space is leased at the office park, the owner can always tell the library that all or some of the parking spaces that had been used by the library would be no longer available, P&Z Director Jeremy Ginsberg told the commission. 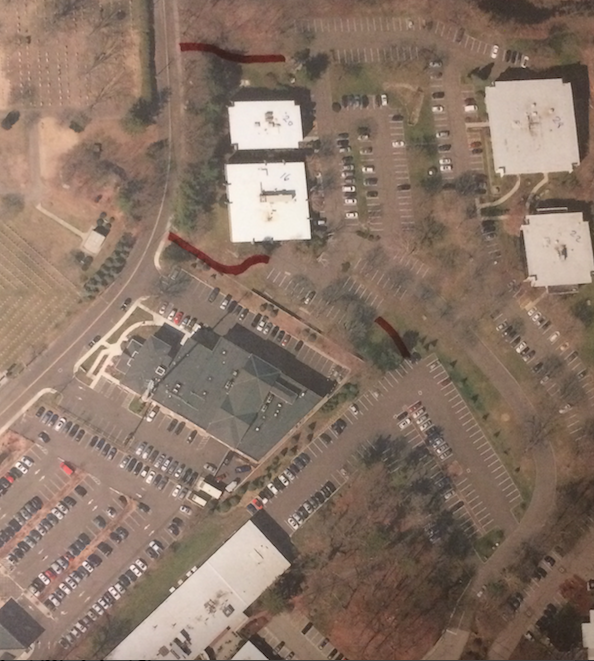 Image submitted to the P&Z Commission

This aerial photo shows thick red lines where the sidewalks will be installed. The dark-roofed building near the center is the Police Department (the Post Road, not shown, is parallel to the bottom of the picture, Hecker Avenue can be seen on the right). The library’s current parking lot is in the lower lefthand corner.

But he added, “In my experience, especially in these far back buildings […]” and he shook his head, appearing to indicate he doesn’t expect that to happen any time soon.

The Thorndal office park currently has 457 parking spaces, which is fewer than the amount required by existing town planning regulations (about 600 for the 152,000 square feet of office space in the park), but the P&Z Commission granted a waiver to the owners years ago, as long as the owners could demonstrate that no additional parking was required, Ginsberg said.

The sidewalks can be constructed with few changes to the landscape, Alfred Mascia Jr., an engineer with Tighe and Bond, told the commission. Some boulders might have to be moved near Hecker Avenue and a tree limb would have to be trimmed, he said.

The sidewalk on the side of the Police Headquarters property nearest the Post Road would turn behind the police property to avoid a ledge, he said. There is a slight incline of six or eight inches the length of 10 or 15 feet, but that’s negligible, Mascia indicated.

Gray said that the library is much more interested in building the two sidewalks that would connect with Hecker Avenue, and “we are not absolutely committed to” the shorter sidewalk farther within the Thorndal office park.

P&Z Commission member Elizabeth Riva asked whether or not an entrance to could be built connecting Hecker Avenue to some of the parking lots in the back. Ginsberg replied that the idea had explicitly been rejected by the P&Z Commission in the past in order to prevent drivers from using the property as a shortcut between Hecker and the Post Road.

You can watch the library’s presentation to the Planning and Zoning Commission from time stamps 54:56 to 1:13:00 (roughly) in this Darien TV79 video: