James Franklin McMahon, 89, a computer sales executive from the early days of electronic data processing, died May 26, 2016, after a short illness. A resident of Essex, he had formerly resided in Old Lyme and Darien. 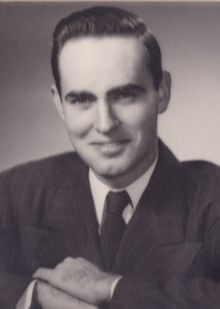 James McMahon’s funeral date has not been set.

Jim was born in Brooklyn, N.Y. He was a graduate of the Poly Prep Country Day School and Colgate University, where he was active in the Theta Chi fraternity.

While in college, Jim dated Barbara Doyle, a student at Smith College who he had met at dancing school in Brooklyn. Immediately after their college graduations, Jim and Barbara married in 1950.

Jim joined the U.S. Coast Guard following college and eventually rose to the rank of lieutenant commander. He served aboard the USCGC Campbell, a 327-foot cutter assigned to weather patrol in the North Atlantic. Upon discharge from active duty in 1953, Jim served as the commander of the Stamford Coast Guard Reserve Unit.

— an obituary from the Robinson, Wright & Weymer Funeral Home

Following his active Coast Guard service, Jim joined Univac Remington Rand as a salesman, where he worked for most of his career. Jim closed the sale of the Bowery Savings Bank’s first mainframe computer system, which was also the first commercial application of a real-time computer system.

Jim’s technique in this sale was described in a chapter titled How to Kill a Gigantic Competitor in “Great Sales by Today’s Great Salesmen”, which has been used as a college textbook in courses on salesmanship.

Jim and Barbara raised their two children in Darien. Upon Jim’s retirement, Jim and Barbara moved to Old Lyme, where Jim was active in the Old Lyme Country Club and the Rotary Club of Essex.

Jim is survived by his wife, Barbara of Essex; his daughter, Melissa and her husband, Jonathan, of New York City; his son, James of Greenwich; and his two grandsons, Thomas McMahon Cramer of New York City and Matthew James Cramer of Chicago. He was predeceased by his brothers, Edward and Thomas.

Interment with the rendering of full military honors at the Duck River Cemetery in Old Lyme will be private. A memorial service will be held at Essex Meadows at a date to be announced.

Memorial donations in Jim’s name may be made to the Rotary Club of Essex Scholarship Foundation, PO Box 484, Essex, CT 06426.

Arrangements by the Robinson, Wright & Weymer Funeral Home in Centerbrook.

To share a memory of Jim or send a condolence to his family, please visit the funeral home website.