Darien’s 2018 Memorial Day parade steps off at 10 a.m. sharp on Monday, May 28 from Goodwives Shopping Center, turns right and travels on Old Kings Highway South to Brookside Road and then turns left onto the Post Road until it reaches the veterans cemetery at Spring Grove Cemetery.

Here’s more of what you should know about the parade, the marchers and the route, the family-friendly party at the end at Tilley Pond Park, the Memorial Day speaker and the grand marshal. At the end, we’ve got instructions for marchers.

Parade Route: Goodwives Shopping Center to Brookside Road to Post Road. At the end of the parade, continue on Post Road PAST Hecker Avenue. Vehicles stay to the left and walkers stay to the right. Vehicles are not permitted to stop and must continue straight past Cemetery.

Length of Parade: Approximately 1.25 miles. Make sure all marchers are able to complete the parade. Marching Parade Officials will maintain a uniform cadence and a steady forward march at all times. All units will maintain a reasonable distance from the unit in front of them.

The reviewing stand Is located in front of Nielsen’s Florist on the Post Road where the parade will be reviewed by the Grand Marshal and other dignitaries.

After the parade, the Memorial Day speaker will talk at a ceremony held at the Connecticut Veterans’ Cemetery off of Hecker Avenue at Spring Grove Cemetery.

The Memorial Day Food Fair at Tilley Pond Park takes place immediately on May following the parade. Admission tickets are $5 and can be purchased at the gate

DAF Media will live stream this year’s Darien Memorial Day Parade, the first time the parade has been broadcast live in its entirety. You’ll also be able to see it later, on-demand.

DAF Media, a joint venture between the Darien Athletic Foundation and the Darien Foundation, will station three cameras near the end of the parade route between Nielsen’s Florist and the Darien Library, close to the official viewing stand.

Like all DAF Media broadcasts, the parade will be free to view live or on demand via the DAF YouTube channel.

Where Marchers Assemble Before the Parade

Marchers should assemble at these spots at the Goodwives Shopping Center parking lot:

From the Darien EMS-Post 53 announcement:

Enjoy live music, a silent auction, games and crafts for kids and a delicious array of food when Darien EMS-Post 53 holds its 30th annual Memorial Day Food Fair at Tilley Pond Park on May 28th following the Memorial Day parade.

The money raised at the Fair supports training, provides supplies for patient care, provides hands-only CPR and Stop the Bleed classes and maintains the ambulances.

The Fair, a 30-year Darien tradition, begins immediately after the parade and continues until 2:00 p.m. featuring fun for the entire community.

Admission tickets are $5.00 and can be purchased at the gate as well as outside select retail and non-retail locations around town prior to Memorial Day.

As always, the fair will include a tasty and tempting food selection.  Post members will be hard at work grilling hamburgers and bratwurst, and serving pulled pork, seafood salad and wraps, delicious desserts and more.

The 2018 Darien Memorial Day speaker is Patricia Parry, a Gold Start Mother. Her son, Navy SEAL Chief Brian Robert Bill, was killed in action on Aug 6, 2011 in Afghanistan when the helicopter, call sign Extortion 17, he was riding in was shot down. 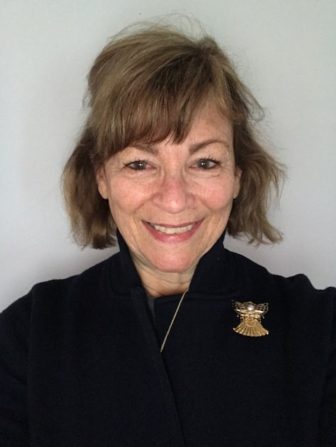 Photo from Monuments and Ceremonies Commission

Pat is a Stamford native. She is the eldest of seven children of Betty Nagle and Tom Davis. She graduated from SCHS and St. Vincent’s Hospital School of Nursing in New York City.

Pat lived in Massachusetts and worked at Boston City Hospital before returning to Connecticut in 1976 where she continued her nursing career working at St. Joseph Medical Center, then in private duty nursing, dialysis and research.

Brian was the youngest of Pat’s three children from her marriage to Scott Bill. In 1988, Pat married Dr. Michael Parry and two step sisters rounded out the family to five children. Brian also had a plethora of uncles, aunts, and cousins who all loved hearing Brian’s stories.

Currently, Pat is a member of the Health Commission and anti-blight committee in Stamford; a Member of Veterans Park Partnership, Inc, working with the City of Stamford to renovate Veterans Park; a member LZ 4 Vets; and with her husband Michael is working to raise funds for scholarships in Brian’s name at Norwich University and Trinity Catholic High School. 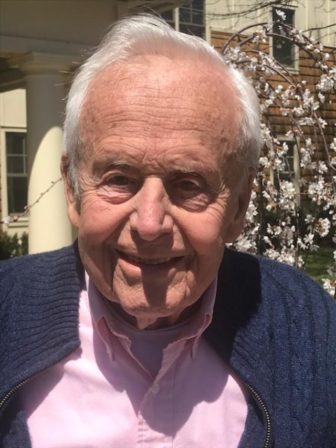 Photo from the Monuments and Ceremonies Commission

Lieutenant J.G. Mitchell was qualified as a navigator, gunnery, supply, commissary and communications officer. Born in Richmond Hill, NY, Mitchell graduated from the University of North Carolina with a B.S. in economics.

He spent two years at the USNTS at Princeton, N.J. and attended the Naval Reserve Midshipman School at Fort Schuyler in the Bronx and the Naval Training Center in Miami. Mitchell was awarded the American Theater Medal, Asiatic-Pacific Theater Medal and the WWII Victory Medal.

He and his family have lived locally since 1970. Married to Mary, they have three sons and four daughters, three of whom live in Darien as do 11 of their 20 grandchildren.

Mitchell was for many years a Division Manager for Union Carbide Corporation, after which he became an independent marketing consultant developing and producing various brands of anti-freeze products.

Mitchell has served as past president of the Darien Men’s Association and is active as a Eucharistic minister, lector and financial assistant at St. Thomas More Church. Mr. Mitchell also served two terms as a member of the Parish Council.

He coached girls’ travel soccer and was instrumental in making girls’ soccer a varsity sport at Darien High School.

This year’s Memorial Day Parade will kick off promptly at 10 a.m. from Goodwives Shopping Center where participants are asked to assemble by 9:30 a.m. The Parade continues from the shopping center down the Post Road to Spring Grove Veterans Cemetery where a ceremony is conducted.

Instructions and Rules for Marchers

IMPORTANT: Please send instructions to ALL members of your group, especially groups with children

ASSEMBLY: All units must assemble at the Goodwives Shopping Center at 9 AM. Signs will indicate where each division assembles. Marchers must be in assigned position by 9:30 AM. Step off is 10 AM SHARP.

CHILDREN’S MARCHING UNITS: If you are dropping off a child, the child’s group must have an adult in place. Parents with children will not be allowed to linger or park their car. This causes congestion and unsafe conditions.

**Parents who must wait with their child, because no adult is in place, are required to park their car at the YWCA, First Congregational Church, or the Mechanic Street lot behind the Darien Fire Station, and walk their child into the assembly area.**

PARKING: Police will be directing traffic. The Goodwives Shopping Center parking lot is for shoppers and parade vehicles only. There is NO parade parking. See above for available parking lots.

Goodwives Shopping Center to Brookside Road to Post Road. At the end of the parade, continue on Post Road PAST Hecker Avenue. Vehicles stay to the left and walkers stay to the right. Vehicles are not permitted to stop and must continue straight past Cemetery.

Approximately 1.25 miles. Make sure all marchers are able to complete the parade. Marching Parade Officials will maintain a uniform cadence and a steady forward march at all times. All units will maintain a reasonable distance from the unit in front of them.

All marching units will march at least six (6) abreast, with the exception of color guards. Reviewing Stand Is located in front of Nielsen’s Florist on the Post Road where the parade will be reviewed by the Grand Marshal and other dignitaries.

Please join us at the Connecticut Veterans’ Cemetery to pay respect to the military people who have preserved our freedom with the ultimate sacrifice.

The parade is a procession to the Connecticut Veterans’ Cemetery to honor those who died in service of our country. The spirit of the parade is to celebrate the lives of our war dead. Participants are encouraged to identify the organizations they represent, but are requested to refrain from advertisements or promotion of events that have nothing to do with Memorial Day.

WE WILL REMEMBER THEM