The investigation in to Vence-Small began in the Summer of 2017 when BMW of Darien provided information to Det. DiIorio that indicated that an employee was embezzling funds from the company.

While working as BMW’s financial controller, it was discovered that Vence-Small had embezzled $1.1 million from the dealership in just three years. 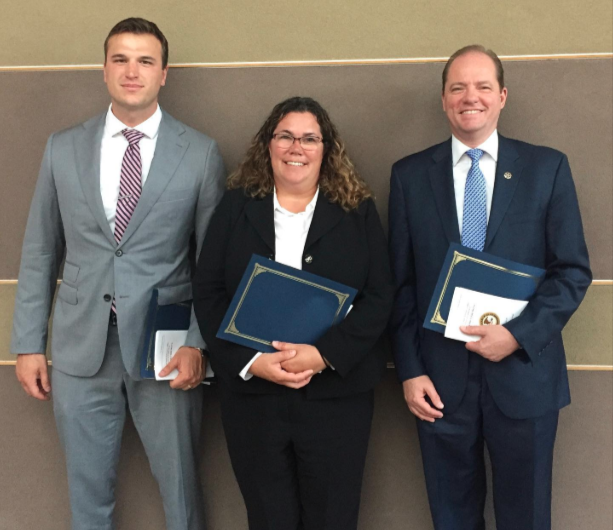 Due to the significant amount involved, the investigation reached the federal level and the United States Secret Service and the Connecticut Financial Crimes Task Force were brought on board.

Over the next several months it was determined that Vence-Small had used company funds to pay off personal credit card bills, take luxury vacations, purchase a sports car, and to perform home remodeling and landscaping work.

The case that Det. DiIorio and her co-investigators built was so strong, that in February 2018 Vence-Small had no choice but to plead guilty to the charges.  Vence-Small was sentenced to 30 months in prison and will have to make full restitution as part of her plea agreement.

Det. DiIorio and her co-investigators were presented with the U.S. Attorney Award for this investigation in a ceremony in the Aldermanic Chambers at New Haven City Hall June 14, 2019.

The U.S. Attorney Award is designed to recognize federal, state, and local law enforcement partners for extraordinary contributions to the Department of Justice mission.

The men and women of the Darien Police Department would like to congratulate Det. DiIorio for her diligence and perseverance while she and her co-investigators navigated the complexities of this investigation.  Job well done!!