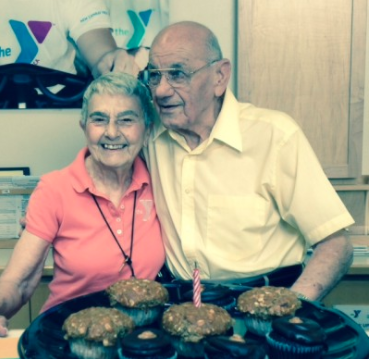 Dante Chicatell, then 101, in a photo taken with Linda Muscolino at her 92nd birthday party at the New Canaan YMCA in 2015.

Born in Stamford on Nov. 24, 1913, he was the son of the late Mariano and Antoinette Chicatell. He grew up in Stamford.

At Stamford High, Dante was an “overall” student. He excelled on the varsity basketball, football and baseball teams. He received Allstate Honors as a pass catching end in 1931 and was so respected by his football opponents, he was named to the “All Opponent All Star Team.” He was very popular in school and was elected president of his junior class and vice president of his senior class.

After his high school graduation in 1933, he attended Saint Viator College in Illinois on an athletic scholarship for football and basketball. He left college to go to work to assist his family. He played semi-pro football with the Golden Bears and Fairfield Tigers, and was a key player on the very strong Sterlings and Questions Marks basketball teams.

On July 26, 1941, he married Madeline Frate, and the couple moved to Darien that year. He lived in the same house in Noroton ever since.

He worked for the Board of Recreation as a gym instructor and referee. He worked on the day shift for Pitney Bowes and was with the company from the 1930s to 1947. During World War II and at night, he supervised a secret project for the government making computer chips for bombs.

Dante and his brother Joe owned a gas station and oil company, Chics’ Service Station, Chics’ Oil Company on Belden Street in Stamford, for 47 years. At the age of 86, he decided to go back to work and started another career at the New Canaan YMCA, working to the age of 104 as a greeter at the front desk.

The New Canaan Y so loved and admired him that it honored Chic by naming a newly constructed café “Dante’s Café.” Everyone at the Y looked forward to the home-made hats Chic wore for each of the major holidays. He was also honored for being the oldest living YMCA employee in the United States.

He was a member in good standing at Saint John Church in Darien for over 60 years. He was a member of the Knights of Columbus rising to the rank of Fourth Degree Knight.

He enjoyed going to casino’s and playing the horses and could be seen going to Atlantic City.

Dante was a man of principle, great dedication, and love to his family and friends. They threw the mold away after he was made. There will never be another Dante Chicatell. He will be greatly missed.

This is Dante’s life in a nut shell and as Spock said in Star Trek, “live long and prosper” and Dante has done this very, very well!!

He was predeceased by his loving wife Madeline — “The Big M” Frate Chicatell; three brothers: Frank, Joe and Carmine; and his sisters: Yolanda and Josephine.

The family will receive friends at the Edward Lawrence Funeral Home, 2119 Post Road, from 8:30 to 9:30 a.m., Monday, March 5. A Memorial Mass will be celebrated at 10 a.m. that day at St. John Roman Catholic Church, 1986 Post Road, Darien. There will be a private family interment at Spring Grove Cemetery.