Town Health Department ratings certificates are supposed to be displayed prominently, like this one at the Sugar Bowl.

One food-serving place in town received a “C” rating from health inspectors in the most recent health inspection reports released by Darien Health Department.

The seven inspection reports released on Thursday took place from July 18 to 24. In addition to the “C” rating, five inspections resulted in “A” ratings (the best), one other resulted in a “B”.

—Uncle’s Deli — 1041 Post Road — July 24 — Town Rating: C — State Score: 84 — Inspector’s remarks: “Sandwich toppings in bain marie temping [temperatures] at 50 degrees. Not properly holding temps; No thermometer in temporary walk-in refrigerated trailer (corrected); box of onions stored on floor under sink (removed); no sanitizer set up at line (corrected); unclean wiping cloth hanging from cook’s apron (corrected); label items in grab-and-go unit with date of production; drinks stored on rusty shelving outside; floor in walk-in cooler in disrepair; floors unclean; grease buildup on hood; mops hung upside down and stored outside.” — Inspector’s Comments: “Temporary refrigerated trailer in use in parking lot. Unit is lockable. Ambient temp inside cooler is 42. Product temped at 40. Walk-in unit inside not working. Being repaired today and new diamond flooring to be installed. New shelving to be installed as well. Nothing stored inside. Bain marie on the line also not properly holding temps. Sandwich toppings at 50 degrees. Instructed to only use workable amounts placed on ice bed to keep temperatures. Nothing stored under. New unit is being shipped (verified). Gloves worn. Hand washing observed. Soup, 145 [degrees]. Nothing else hot held. Allowing small workable amounts of toppings to be held in top portion of cooling unit as long as container is in constant contact with ice to maintain temps. Remaining items stored in deli case and temporary trailers.” 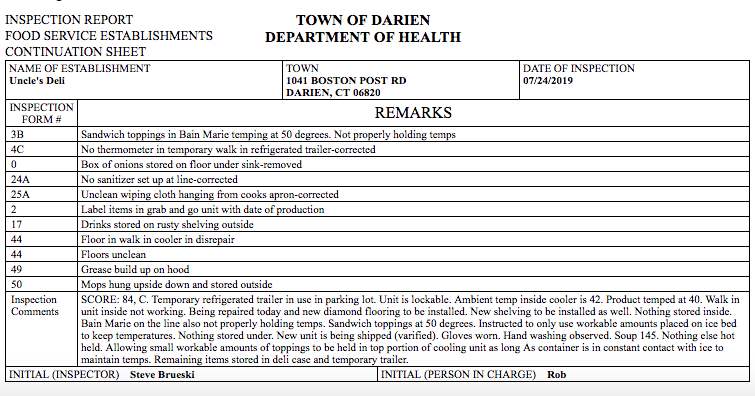 Inspector’s comments and remarks sections of the July 24 inspection of Uncle’s Deli.

One thought on “Worst Rating, ‘C’, for One Food-Serving Establishment in Latest Darien Health Inspection Reports”