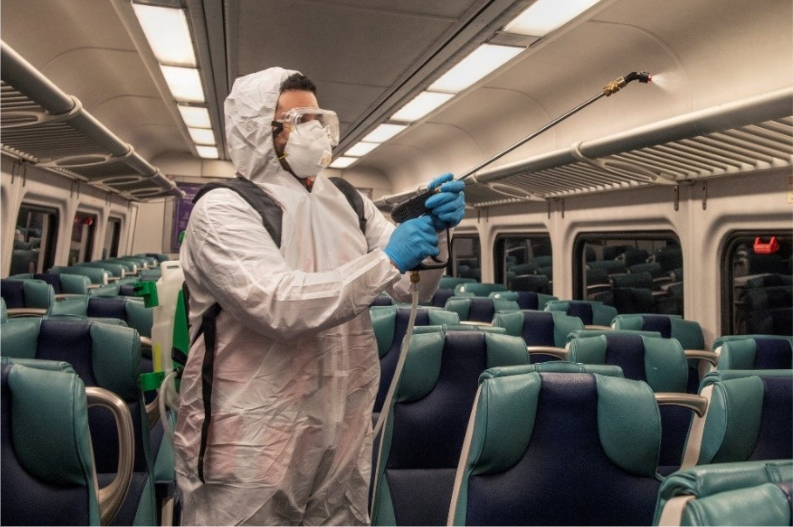 Cleaning a Metro-North train during the pandemic

As New York City businesses reopens it’s expected that one million people will get back to work, some of them from Connecticut. But how they get to those jobs is the big question.

While I’ve written for weeks that I expect many Nutmeggers will opt first for their personal automobiles, the resulting traffic mess will soon have them reconsidering a return to Metro-North and the city’s subways.

The big issue, of course, is keeping everyone safe by maintaining social distancing and requiring face masks for all riders.

The MTA’s 6,400 subway trains and 4,700 buses will be back to full service to minimize crowding. Transit advocates are encouraging New York City to add more express bus lanes, minimizing travel times (and exposure) for passengers.

Fares are still being collected on all Metro-North trains, but only off-peak fares, even in rush hours. But you must have a pre-bought ticket or smartphone no app — no cash is accepted.

On New York City buses, all boarding will be by rear doors, so no fares will be collected.

For many weeks now the commuter trains, subways and buses have been undergoing daily disinfection as workers wipe down all surfaces, handrails and touch points. 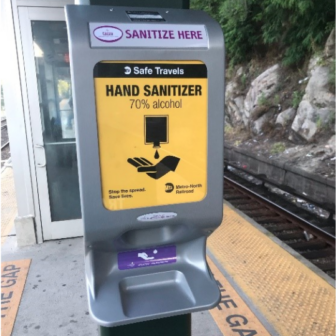 Hand sanitizer at a Metro-North station

The MTA’s new Innovation Officer, Mark Dowd, has also been experimenting with portable UV light systems to blast the virus from subway interiors. It takes about 15 minutes to disinfect each train with the UV, meaning the entire fleet can be treated in a day.

After the UV treatment all surfaces are treated with a biocide coating which can kill the virus for days or weeks. Dowd says if the system proves successful it will be brought to Metro-North by July.

Air filters on all trains and buses will be changed more frequently, but they aren’t fine enough to capture tiny airborne viruses. So ventilation will be a major concern especially as ridership increases. That’s why face masks are so important.

In crowded Japan commuters have worn face masks for over a century, some because they may be ill and, being considerate, don’t want to infect others. It’s just part of their culture and will probably part of ours, going forward.

On Metro-North face masks have been required for several weeks. On the city’s subways, 4000 volunteer MTA workers will be handing out face masks to those who don’t have them. Hand sanitizer dispensers will be available throughout the system.

More on Mass Transit and COVID-19 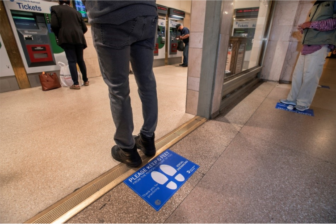 This example of the increasingly familiar “stand here” signs can also be found at Metro-North stations.

But even with a mask and sanitizer, keeping a safe six-feet from fellow passengers will be nearly impossible. That’s why employers are being asked to stagger work hours, avoiding the arrive-by-9 and leave-at-5 crush.

Will riders come back? Metro-North President Rinaldi told me “it will take years, if ever” for ridership to return to pre-pandemic levels.

Is it safe to ride Metro-North? I think so. Properly masked and gloved, I wouldn’t hesitate to get back on the train.