Chevrolet Caprices, like the black and white style, are being phased out.

When a police officer saw a vehicle being driven erratically on the Post Road at about 9:15 p.m. last Friday, the officer pulled the car over and soon charged the 56-year-old man behind the wheel with driving while under the influence.

The officer first saw the vehicle being driven extremely close to the vehicle in front of it; then it failed to turn right in a right-turn-only lane; then it swerved suddenly, almost completely into another lane.

The officer stopped the driver on the Post Road near its intersection with West Norwalk Road. The driver, a Fairfield resident, had slurred speech, but when asked how many drinks he had that night, he at first said “None.” Asked again, later, he said, “One.”

He failed to perform field sobriety tests properly and was charged with driving while under the influence and failure to drive in the proper lane. At Police Headquarters, he refused to take a breath test for blood-alcohol content. 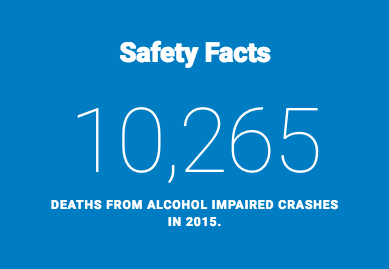 Image and information from National Highway Traffic Safety Administration website on May 31, 2017

Drivers under the influence caused this many deaths in the United States in 2015.

(Refusing to take that test can result in more severe driving restrictions from the Connecticut Department of Motor Vehicles, even if the arrested person is not convicted. Police said Moore was advised that more severe penalties can occur by refusing the test.)

The driver was later released on $250 bond and is scheduled to appear June 6 in state Superior Court in Stamford.

Police reported these other DUI arrests in March, April and May:

One thought on “Police: Intoxicated Man, 56, Charged with DUI After Driving Erratically on Post Road”