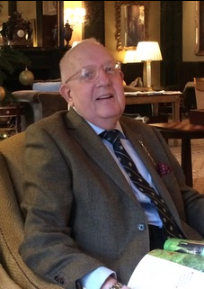 He graduated from the University of Illinois at Champaign in 1965, with a degree in modern Chinese politics. After serving in the United States Marine Corps, he received a Master’s Degree in Modern Chinese Politics from NYU.

He was a doctoral candidate in modern Chinese history and an instructor in the East Asian Languages and Culture Department at Columbia University.

While at Chase, he obtained his J.D. from Fordham Law School in 1985. He specialized in project finance, corporate law and venture capital.

Pete and his wife Claudia married in 1981. In 1988 they moved to Darien. Pete was a devoted father to his children Mika and Geo, traveling thousands of miles to hockey, and lacrosse games and taking them on numerous trips throughout the world.

He inspired his children by the strong friendships that he cultivated — which meant the world to him. Fairmead Road (a/k/a Crabgrass Acres) was the site of many dinners with friends where all sorts of topics were discussed and debated accompanied by Pete’s great humor.

Holiday meals were also shared with friends and others who were far from home on Christmas, Easter or Thanksgiving. Regardless of the number of people who were invited, he made sure that everyone felt like they were the honored guest.

Pete was a man of deep faith. For Pete, faith was about personal relationships, both with his God, and with the people he encountered. He believed that if you “let God into your life, He will transform it.”

Pete lived a life of transformation. He was active in the church communities of St. John Catholic Church, Noroton Presbyterian Church and the Macedonia Church, South Norwalk.

Pete was always helping others. If Pete saw someone in need, he would respond without the expectation of receiving anything in return. With his law degree, he helped service veterans pursue their claims for Veterans Administration benefits.

He came alongside people to provide comfort when they were experiencing hard times. He tutored and mentored ex-offenders through the Macedonia Church in South Norwalk.

He helped the elderly, shut-ins and those who were otherwise not able to fend for themselves. He taught Sunday School at Noroton Presbyterian Church. He was a knight in the Knights of Columbus, a Eucharistic minister, a lector and a 6th grade catechist at St. John Parish.

He inspired many by how he lived and the kind of decisions and choices he made. In his last days, there was a waiting list of friends who wanted to visit him, to say goodbye and to tell Pete how much he meant to them. This was a testament to his life.

A friend of Pete’s son, Geo, described him this way: “A classic man who embodies a set of values others merely aspire to. Someone who holds themselves to a certain standard not for the sake of outward appearances but as a matter of character.”

One could ask Pete Roux just about anything and he would always have something interesting to say. He was an avid hunter. In younger days, he enjoyed boxing and playing rugby. He loved to travel and was always interested in different cultures and perspectives.

He could, with authority, ask for beer and water in just about any language! He lived a life of gratitude, seeing God’s goodness and blessings in all circumstances, even up to the very end of his illness.