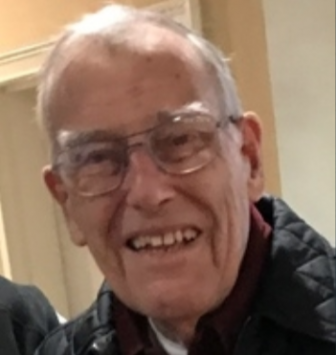 Paul was born July 26, 1928 in Louisville, Ohio to Joseph and Rolene Darrah He was the second oldest of 9 children.

At an early age he was inspired by a family friend for a life at sea and joined the U.S. Navy after finishing high school. He traveled around the world in service to his country for 28 years, attended Officer Candidate School and rose to the rank of lieutenant commander.

After retiring, he earned his B.A. degree at St. Leo’s College and went onto a career in defense consulting. Paul had an amazing work ethic and always looked to volunteer his time. He was an active member of the Knights of Columbus, supported Special Olympics, served as an election official and volunteered at Portsmouth Naval Hospital.

He was married to Grace Haesloop Darrah until her death December 2, 2007. Paul was the beloved father of Paul Darrah Jr and wife Amy of Darien, Connecticut and Keith Darrah and wife Tammy of Montclair, Virginia and grandfather to Matthew and Alexandra Darrah of Darien and Matthew Macejka and Nicolas Darrah of Montclair. He is survived by his two brothers, Carl and Ronald Darrah and sister, Rosalee Ruzinski, and a host of devoted nieces, nephews, cousins and friends.

Paul will always be remembered for his good nature and kind heart and will be dearly missed by his family and all who knew him.

Paul will be buried in Arlington National Cemetery beside his wife Grace who also served in the U.S. Navy. A memorial service will be scheduled at the Navy Chapel at the time of the burial.

The family would like to thank the amazing individuals at Maplewood of Darien who took great care of him during his time in Darien.

Memorial donations may be made in Paul’s memory to the Alzheimer’s Association or support the Maplewood of Darien Team Walk to End Alzheimer’s.