One restaurant in town received a “C” in the six inspection reports for Darien restaurants and other food-serving establishments just released by Darien Health Department.

— The Waters Edge at Giovanni’s — 2748 Post Road — June 21 — Town Rating: C — State Score: 76 — Inspector’s Remarks: “Two cases of heavy cream at 55 degrees (produce fridge was out, so they moved product to save) must discard all product; raw breaded protein over RTE [ready-to-eat] food in two refrigerators; using cell phone and then back to cutting produce, changing tasks from cleaning to handling food, only observed one employee washing his hands during inspection, and this was in the prep sink; unclean slicers, ice cream scoops left unclean; plastic tray over shelving in meat walk-in [refrigerator] in poor repair; no waste receptacle near hand sink; two prescription medications on the line, on the prep shelf; shelving under prep sinks, end of the line shelving; heavy fruit fly presence, must call for TX today per DOH [Department of Health]. Rodent activity observed. Orkins last treatment on June 13; floor unclean throughout kitchen and grease buildup around fryers; flaking ceiling paint.” — Inspector’s Comments: none. 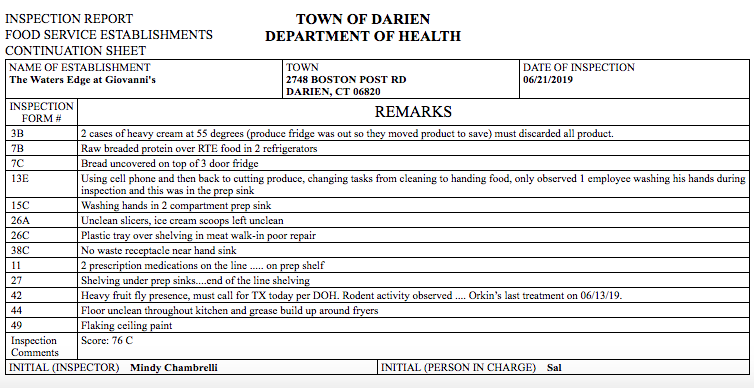 Part of the June 20 inspection report for the Waters Edge at Giovanni’s restaurant.