The Old Kings Highway North bridge over Interstate 95 in Darien may be as much as 60 years old.

Work on completely replacing the Old Kings Highway North Bridge over Interstate 95 is scheduled to start April 1 and will result in lane closures on both the interstate highway and the road.

The project is supposed to end by Nov. 26 (the Sunday after Thanksgiving) and will result in complete closure of Old Kings Highway North over the bridge apparently only on eight overnight periods, the state Department of Transportation announced on Friday.

Darienite.com had reported an official saying in January that state officials expected the bridge to be closed all day for as many as eight days during the project, but that idea is not in the official announcement. Instead, it appears traffic will be able to go over the bridge at some point on every day of the project, especially during commuting times. 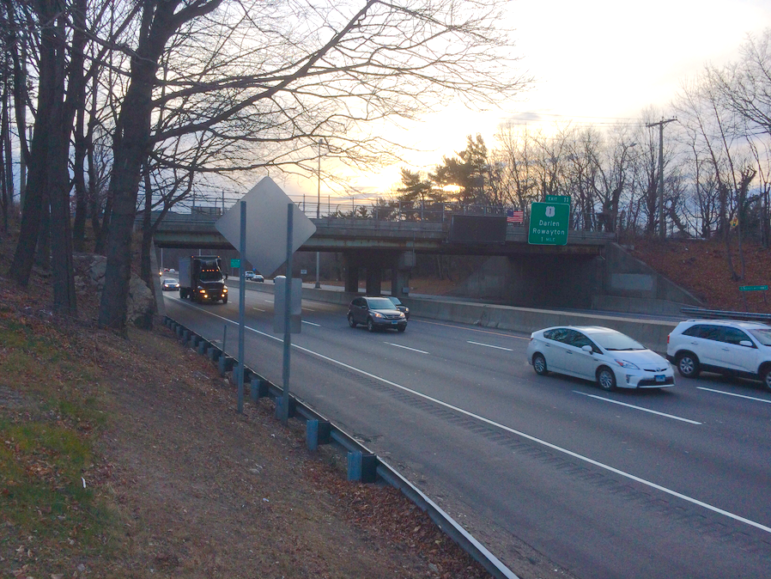 The Old Kings Highway North bridge over Interstate 95 in Darien may be as much as 60 years old.

During commuting hours of 6 a.m. to 9 a.m. and 3 p.m. to 6 p.m., there won’t even be lane closures over the bridge, according to the announcement (which appears to have been cut off at the bottom on the state Department of Transportation website, leaving out some information on possible lane closures during weekends). Lanes may be closed before 10 a.m. Saturday and Sunday.

The $4.54 million project, awarded to New England Road Inc. on Jan. 24, was earlier said to involve eight days of complete road closure, but the official announcement on Friday only mentioned overnight closure of the road.

Interstate 95 may be closed entirely at the bridge, in both directions, for 20-minute periods between midnight and 5 a.m., according to the department.

Here’s the complete announcement from the DOT, as published on the department’s website:

The Connecticut Department of Transporation is announcing the start of Project 35-194 Rehabilitation of Bridge No.00047 Old Kings Highway over I-95 commencing on April 1, 2017, in the Town of Darien.

Monday through Sunday between 9 p.m. and 5 a.m. with noted daily exceptions.

Between 12:01 and 5 a.m. on all non-holiday days the contractor will be allowed to halt I-95 traffic for a period not to exceed 20 minutes to perform necessary work for the installation and setting of bridge members and for the removal of the existing bridge superstructure.

In order to facilitate the accelerated replacement of the bridge superstructure, Old Kings Highway North will be closed at the bridge site for total not exceeding eight (8) overnight periods.