First Selectman Jayme Stevenson and the Planning & Zoning Commission are recommending that Darien opt out of a new state mandate that allows temporary structures for disabled people to live in on land where their friends or family are living.

The P&Z Commission voted unanimously, with four of six members present, to opt-out of the mandate, as allowed by the state law that just put it into effect on Oct. 1. Opting out would take effect if the Representative Town Meeting also votes for it.

The unusual state statute allows cities and towns to opt out of the provisions, which went into effect Oct. 1, that would allow the structures to be put on a residential property whether or not they comply with local zoning regulations.

The local Planning & Zoning Department would get an application, determine if the resident fit the criteria for being disabled, either mentally or physically, by getting a doctor’s letter affirming the resident’s condition, and would have to process the application in 15 days.

That would allow a temporary structure, built off-site, to be placed on the property of the caregiver. The structure could be no more than 500 gross square feet, and no foundation would be allowed for it.

Description of the Act

Fred Doneit, senior planner in the Planning & Zoning Department, gave the P&Z Commission this description of the law at the P&Z’s Oct. 3 meeting:

“This act basically approved ‘temporary health care structures’ as allowable accessory units in single-family residential zones unless the municipality opts out of the statute.

“So the act defines these ‘temporary health care structures’ as ‘transportable residential structures not larger than 500 gross square feet, primarily assembled off-site’ and as owned by a caregiver or mentally or physically impaired person and used as his or her residents.

“So the standard set forth in this new act would pre-empt Darien zoning regulations, even where our regulations otherwise prohibit such a use in residential zones.”

The statute describes the structure as “temporary” but there is nothing in the statute to indicate when or how it would have to be removed, town officials said.

The Planning & Zoning Commission discussed the statute first on Sept. 12 and then again during and after a public hearing on Tuesday, Oct. 3, when it voted 4-0 to recommend that Darien opt out of the law.

The opt-out provision in the state law also mandates that the town’s legislative body, in Darien’s case that’s the Representative Town Meeting, must also approve of opting out. P&Z officials hope to get the RTM to vote on the opt-out proposal at the RTM’s Oct. 23 meeting.

The Board of Selectmen also plan to bring the matter up at its meeting earlier in October for discussion and a possible vote recommending whether or not to opt out. (The state statute appears to assume the Board of Selectmen is the chief legislative body of all towns in the state, so a vote from both the selectmen and the RTM could prevent a possible legal challenge on that point.)

Doneit said the act appears to be well-intentioned, but there are numerous possible unintended consequences that make it difficult for the town to enforce.

P&Z Commission Chairman John Sini, appearing to read through a report Doneit had prepared for the board about the law, went through a list of problems or potential problems Darien officials would have if the law were to continue in effect:

—The structures could exist for years without the town being able to regulate them.

—The town is required to grant a permit within 15 days of a request for one of the units.

—Town land use officials would have to determine if the proposed resident is someone who falls into the definition of an elderly or disabled person under the act by confirming a doctor’s letter, “which is unprecedented, right?” Sini asked. Planning and Zoning Director Jeremy Ginsberg replied, “Yes.”

—The same officials would have to determine if the resident caregiver is not being paid — also unprecedented, Sini said.

—The town would have to figure out what information it received was allowed to give out information on the permit, as might be required under the state Freedom of Information Act, or whether federal privacy law (HIPAA, the Health Insurance Portability and Accountability Act of 1996) instead applies.

—”Enforcement problems with the removal of the structure after the occupant moves out or is deceased,” Sini said (or read).

—”And you [Doneit] pointed out, it definitely conflicts with many long-time, well-thought-out zoning regulations in the town of Darien,” Sini said.

At an earlier Sept. 12 meeting of the commission, Ginsberg discussed some of the problems with the law, as written.

“For us to approve [an application], you’d have to give us some letter, presumably from some doctor, saying that [the] person has some kind of impairment […] Say they get over whatever impairment they have. It becomes very awkward to ask someone to leave […] or ask for verification [or] for our staff to start chasing people around on these things.”

Doneit said town officials could always devise a local law to achieve the same end of helping families find an affordable way to care for an elderly or otherwise infirm individual.

The law might take parts of the state law and rework it to avoid the parts difficult for the town, Doneit said.

At an earlier meeting, on Sept. 12, Sini said he’s interested in finding a way to help people care for family members at home.

“What scares us most when we implement things, I think, are the unintended consequences,” he said. “I think there are some flaws in the way this legislation is written. Now, that’s not to say — I think that this committee, at least me personally, would not support health care structures, even temporary health care structures, on properties. I’m just not quite sure if this is the time or the way to do that.”

The legislation applies to people with physical or mental disabilities, not just seniors, Doneit pointed out.

“There are challenges for those with mental disabilities, which I’m concerned with,” Sini said. “It’s just a question whether this is the best way to meet it.”

During the public hearing on Tuesday, only one person got up to speak. Susan Fixary said she builds “accessory apartments” for elderly relatives of homeowners in Greenwich, where a local law has allowed them for many years. 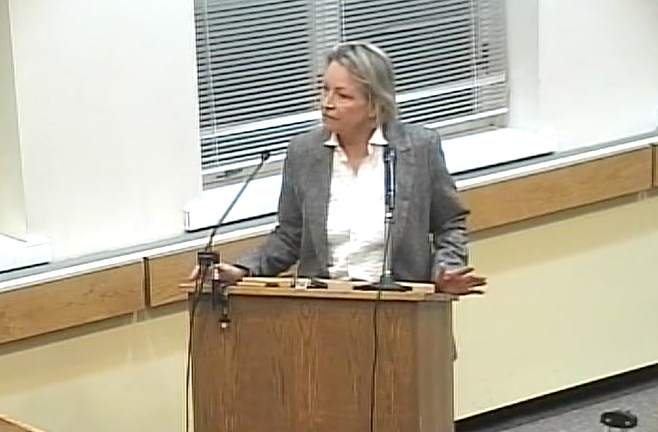 Image from the Darien TV79 video of the Sept. 12 public hearing

Susan Fixary spoke at the P&Z Commission public hearing about the opt-out proposal on Tuesday, Oct. 3.

“I encourage you to look into that,” Fixary said, “because it has been very effective, not only in providing service to the elderly, but […] they freed up affordable housing [where elderly residents were living] in the community.”

Fixary asked commission members that if they support Darien opting out of the new law whether they were still open-minded “to the possibility of this type of unit.” She added later, “Aesthetic concerns can be addressed without eliminating the effort” to provide outdoor structures for disabled people to live in.

Sini, responded that while he can’t speak for his fellow board members, “I would be highly encouraged to figure out something that would work within our regulations and beyond our regulations that would provide the ability for elder care […] or [for] those who are handicapped.” Sini said he would want something that “makes sense for this community.”

The other board members did not respond, but P&Z Commission members usually leave responses to the chairman at public hearings.

Ginsberg, the P&Z director, said that for decades the town has considered “every few years” allowing accessory apartments for elderly family members, but town legislative bodies have always rejected the proposals.

When the P&Z Commission initially discussed the new state law at its earlier meeting, on Sept. 26, First Selectman Jayme Stevenson spoke, saying that while the idea was well-intentioned, the law as written would give the town a number of problems, and she asked the commission to vote to opt out of the law.

Stevenson said she and other town officials had been aware of the legislation, and she had some suggestions about how Darien officials could react to it.

“I would encourage you, by voting this down, to maybe take the time to review and maybe write your own regulations,” she told the board. “I understand the intent of this: It’s really founded from a place of compassion. […]

“The extraordinary costs of health care as people age, or if you have members of your family with physical or developmental disabilities — it could simply be unaffordable to be able to take care of them in a separate facility,” she said.

The law appears not to have been “baked fully enough,” Stevenson said. Requiring land use officials to determine if a caregiver is being unpaid is perplexing, she said.

“I’m not really sure how you do that. I think there are a number of things, that being one of them in here, that are sort of ripe for abuse, if you will, and we would not want to implement a zoning regulation that puts any of our more vulnerable citizens in a position where there’s any abuse or fraud or anything like that,” she continued. “That would be detrimental to them. […]

“Because time is so short, I think that my advice to the commission would be to vote it down, but vote it down under the guise that you’ll study it more, and see if it’s something that you can work into your long-term regulations, and let the RTM enter into that debate [about a Darien regulation for this type of housing]. […]”

“I’m wondering if there’s another way through other zoning regulations where accessory structures — not these accessory structures, but accessory structures in general — could be allowed for this purpose. That wouldn’t mean you set up a 500-square-foot box in your back yard that doesn’t have a foundation. […] I worry about the utility connections with these things, the health and safety concerns with water, sewer, all of those things.”