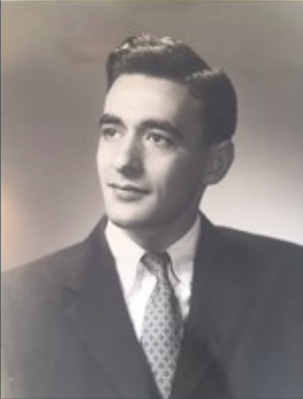 Born to Vincent Sepe and Laurina Nardone Sepe on April 17, 1932, he was known as “Lou” by friends and neighbors, “Sep” by his wife, Cynthia, and “Gigi” or “Uncle Gigi” by his family. In Millbrook, New York, he was born, grew up, played basketball for and graduated from Millbrook High School.

Lou met Cynthia, his wife of 69 years, on a blind date in 1950 in Millbrook, where she was studying dramatic arts at Bennett College. Lou followed Cynthia to New York City, where both of them were to pursue careers in the performing arts.

They returned to the Millbrook area to marry on Nov. 24, 1951, and went on to live in Poughkeepsie, Brooklyn and Pleasant Valley, New York before moving to Darien with three kids, adding adding more by the time they were settled in the house where they have lived since 1960.

Lou made his living in sales, working for many years at Dichello Distributors in Milford, remaining in touch with some of his co-workers up until his death.

Lou kept singing when his kids were young, taking gigs in restaurants like Pagliaro’s in Stamford, as a second or third job. His resonant voice delighted with cover songs from the likes of Sinatra, Tony Bennet, and Bobby Darin. He was always singing, whether around the house, at family gatherings or in the shower.

Lou was a voracious reader, especially drawn to historical biographies, educating himself in history, politics, and sports. He was a deft conversationalist, often engaging in passionate discussions around these topics, as well as movies and music.

He had an incredible memory. Watching old movies with him, he would name all of the actors, from stars to bit parts. He loved playing golf, having started as a kid with his brothers, and making yearly pilgrimages in autumn to play in the Berkshires.

In the last few years he putted around his back yard, where there are still several errant golf balls to be found. He enjoyed working around the yard, taking pride and enjoyment in flowers, herbs and his butterfly bushes, delighting in identifying the butterflies and birds they attracted. He was a loyal Yankees fan and a real people person, enjoying the social aspects of his part-time jobs throughout his retirement at the Puritan and the Darien Donut.

A devout Catholic, he never missed a Sunday in his role as a well dressed usher at St. John Roman Catholic Church, enjoying and charming all who entered. He was hard to get to a party and, once there, twice as hard to get to leave.

He especially loved children, spending time with grandkids whenever he could, often throwing a ball, offering sport tips or getting down on the floor to play or read with them. Unfortunately, he had yet to meet three of his great-grandchildren due to geography and Covid.

In his work, his community and his family, Lou was known for being a polite, kind, warm and generous person. He had a typical “Dad” sense of humor that was playful, if cringeworthy and a youthful energy, belying his 88 years, making his sudden passing all the more shocking to those who knew him.

He is also survived by his brother Victor Sepe of Millbrook, his sister Rosemarie Nielsen of Poughkeepsie, New York, and several nieces and nephews, grand-nieces and grand-nephews.

Due to Covid there was a small family viewing and Mass. A celebration of Lou’s life will be planned when it is safe to gather.

In lieu of flowers, please make donations in Lou’s name to St. Jude’s, Children International, or a charity or cause dear to your heart.

— This obituary was published on Legacy.com by the Darien Times. Online condolences may be left on the obituary page.