Although official vote totals from the Darien Registrars of Voters Office were not available Tuesday evening, joyful Republicans said they won the first selectman race and the contest for Board of Education seats.

A dejected official in the town Democratic Party said the same.

First Selectman Jayme Stevenson tweeted that Monica McNally, the GOP candidate to replace her, had “won in a landslide.”

Susan Gray, the Democratic registrar of voters said absentee ballots were not expected to be counted until late Wednesday morning. That decision was made by the head moderator, the person in charge of counting Darien’s votes. Neither Gray nor Republican Registrar of Voters John Visi knew why the head moderator had decided to put off the count. Gray said the Secretary of the State’s Office had consented to the delay.

A town Democratic Party official, who spoke on condition of anonymity, said the returns his party gathered from polling places showed Republicans had the election well in hand, with all contested races going to the GOP.

The official said the vote totals from the voting districts gave the Republican candidates enough votes that the absentee votes wouldn’t change any races. 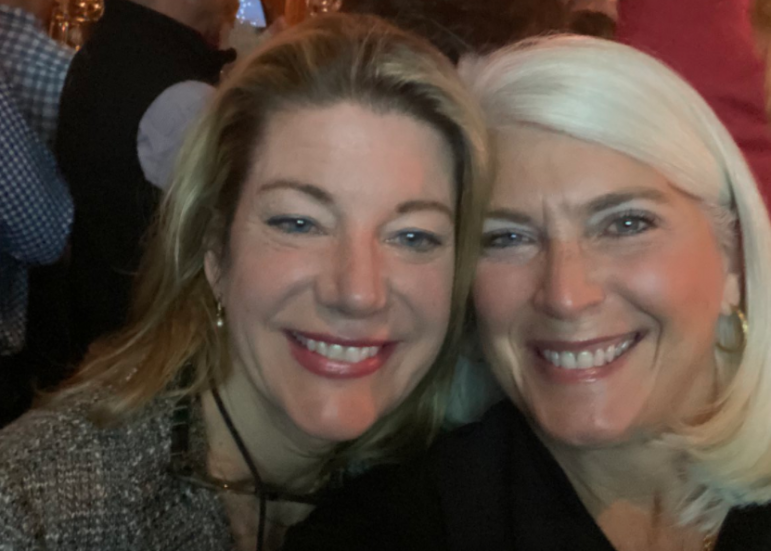 At The Goose restaurant downtown, Republicans jammed in the bar. A Darienite.com reporter at the scene saw David Brown, a candidate for re-election to the Board of Education, standing on the bar telling the crowd that despite attacks from Democrats during the campaign, people could just look at the election results.

“This is what Darien is,” Brown said. The crowd cheered. “Darien is a great town,” he added

[Editor’s note: That was me at the bar. I started wading into the wall of people, but then realized that I hadn’t been in a crowd packed that tightly since before COVID-19, and I need my third (booster) shot, so I left. The Democratic election night party at Louie’s, down the street didn’t look safe for someone who needs a booster shot, either. So, along with the vote totals, you won’t get much of the “color” just yet.]

Brown had been harshly criticized by some Democrats who called the way he had held his fingers during the League of Women Voters debate — with thumb touching the end of his index finger in a sign that looked like an “OK” gesture — a sign of white supremacists.

During the campaign, Brown issued a statement which didn’t directly deny that he had meant to make a white supremacist sign, although he vociferously condemned some Democrats (not candidates or party officials) who accused him of using a white supremacist sign on purpose. Democratic candidates and party officials questioned why Brown had held his hand that way, then noted that Brown hadn’t directly denied doing so with the intent of signaling to far-rightwing people.

The Darien Republican Town Committee also issued a statement condemning Democrats for making the accusations. Darienite.com could not reach Brown on Monday for comment.

At least 7,005 voters cast ballots, either in voting booths or by absentee ballot, said Visi, the Republican registrar. He said a small number of as yet uncounted absentee votes would likely raise the total a bit by Wednesday.