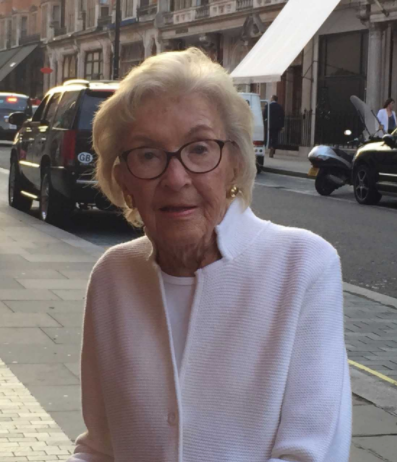 Frances Chandler Travis, 97, of Darien and Vero Beach, Fl., died on July 6 (the birthday of her daughter, Deborah Martin Travis).

Born in Chicago on July 1, 1920, she was the daughter of Milton Evans Chandler and Marion Maus Chandler, and the older sister of James M. and Carol Chandler Rowland.

She grew up in Indiana and Birmingham, Mich., attended Stoneleigh College in Rye, N.H., then moved to Buffalo with her sister Carol, where she was employed as an advertising director for a large local department store.

She then moved to New York City, where she worked in advertising for Burlington Industries in an office on the 4th floor of the Empire State Building.

She met and eventually married Charles “Bud” Merwin Travis on Nov. 25, 1948, with whom she lived happily until his death in January 2016. They had two children, Peter Chandler Travis, a musician (wife, Marybeth Travis), and Deborah Martin Travis, a nurse. Deborah had two children with her husband, John Willis: Jeremy Willis, an artist, musician, and real estate broker; and Lucy Willis, a physician.

She even got to know and love her great-grandchildren, Redding and Walker Willis (sons of Jeremy and Joelle Willis) and Charles Brizzi (son of Julian Brizzi and Lucy Willis, and named for Frances’s husband, Charles.)

In later years, she was an editor and book condenser for Reader’s Digest, and worked with many well-known authors of the day; and in her late 70s, she decided to write her own books, “Finders Keepers,” “Deadlines,” and “Under the Influence,” published between 1989 and ’93 under the name Elizabeth Travis.

Despite the fact that she had never been much of a mystery reader, all her published books were entries in her own Ben and Carrie Porter mystery series, because she thought mysteries more commercial than most genres (unfortunately her first novel, “The Island,” was never published.)

She had a disarming, light touch, and a way of endearing herself to most folks effortlessly, on contact, that never left her. She somehow managed to seem almost entirely melodrama free; even in later years, when she and Bud lost friend after friend to the ravages of time, she seemed never to dwell, no matter how much she loved them, instead accepting all life’s heartbreaks along with its gifts, her memory never failing for a second.

She found in Bud someone who adored her wholeheartedly and without question his whole life, someone with whom she not only shared a wonderful family and an amazing succession of close and devoted friends, but with whom she traveled the world extensively for decades.

She left this life as she lived it, on her own precise schedule, following her 97th birthday celebration with her loving family. She passed peacefully in her own bed, without fuss or drama, a gentle exit from a life well lived by a beautiful, charming woman, both children by her side.

A memorial service will be held in her honor at 11 a.m., Aug. 5, 2017 at St. Luke’s Parish, 1864 Post Road, Darien, where she will be interred next to her husband. Donations in her memory may be made to the charity she worked most for, the Mental Health Association in Indian River County, 820 37th Place, Vero Beach, FL 32960.