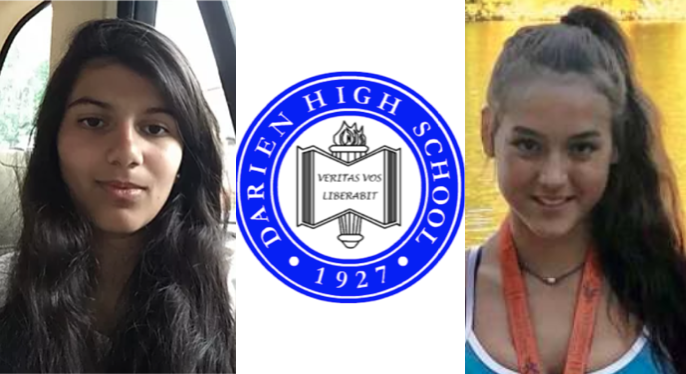 Darien High School has named Maya Nalawade the valedictorian for the graduating Class of 2020 and Alexis Zitzmann as the salutatorian, DHS Principal Ellen Dunn announced on Thursday.

The high school hasn’t announced plans for what kind of graduation ceremony the Class of 2020 will get during these pandemic times, but the traditional addresses made by the valedictorian and salutatorian could be done if all or part of the ceremony is online. (See below for some of what’s been announced about the graduation.)

Darienite.com found a bit of information about each student early Thursday evening (we hope to get more, later): 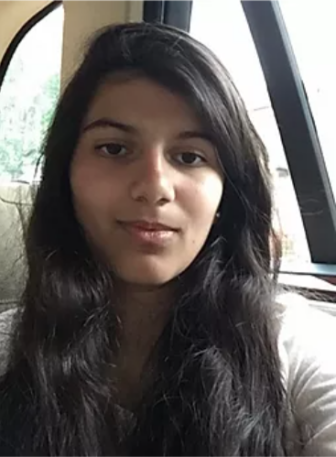 Nalawade, born in the United States, spent several years of her childhood in Amsterdam and then in New Delhi, India before returning to the U.S. Earlier this year she published a book of poetry, “The World is a Broken Puzzle: Exploring Identity and Belonging.”

She has been editor-in-chief of the school’s literary magazine and president of the school’s creative writing club, according to the Polyphony Lit website, an online literary platform for high school students.

“If she’s not writing poetry she’s usually singing, listening to anything from Bollywood to Beyonce, or watching movies (which means she’s probably watching Midnight in Paris for the 100th time),” the website said.

Last May, Nalawade won the DHS Yale Award and was one of the winners of the Special History and Social Science Award. 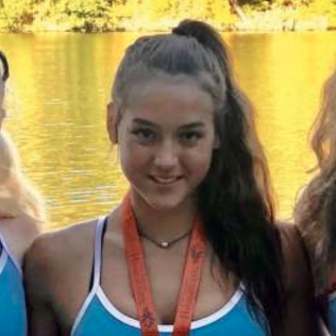 DHS 2020 Salutatorian Alexis Zitzmann, from a picture taken last October when she and other Darien rowers won gold at the Head of the Housatonic Regatta in Shelton.

Zitzmann, named salutatorian, has been a member of the Maritime Rowing Club in Norwalk and was one of four rowers to win the Junior Women’s Quad (4x) competition at the annual Head of the Housatonic Regatta in Shelton last October.

In 2018, she was one of the winners of the Special History and Social Science Award.

Zitzmann is also a member of the Marlins Diving Club.

At the Board of Education’s May 12 meeting, schools Superintendent Alan Addley said:

“Fundamentally, they […] plan to have, depending on how things, health-wise go, an in-person graduation […] and that will be July 25 or Aug. 1, depending on what we hear from the state.”

Board of Education Chairman Tara Ochman said on Wednesday that students are also involved in the planning.

There seemed to be support from the state and other school districts to try to have modified, in-person graduation ceremonies, but those planning the DHS graduation were making alternate plans for a virtual one, as well, Addley said.

We’re also planning some virtual ceremonies for the senior awards,” the superintendent said. “On July 11, they’ll be able to come pick up their diplomas, and there will be people there to celebrate them, and parents will be able to have a photograph [of their graduates] with the principal.”

“The committee has planned a few activities, special activities, for the senior class,” he added.

At the Wednesday, May 20 meeting of the town Operations and Planning Committee, Board of Education Chairman Tara Ochman said the school administration hasn’t yet made an announcement about definite graduation plans. “The Board [of Education] members are all eager to hear the exact plans,” she said.

First Selectman Jayme Stevenson said she was getting inquiries about graduation and asked Ochman who should be contacted. Parents who need to get information should contact the high school or Addley, Ochman said. “It’s up to the school administration to message on things like that,” she said.

“What we’re trying to do […] is to have some version of an in-person graduation, if possible,” Ochman said, “and then set up alternate plans if that doesn’t work.”

She said organizers “are setting up a variety of scenarios, based on the [state] commissioner of education’s guidance.”