Born in New York City to Bernice Grapes and William L. Caffrey, Sr., Bill lived a full and loving life with his family at the center. 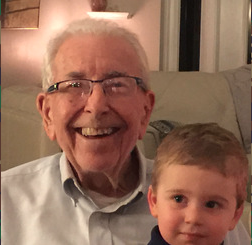 William Caffrey, 92, passed away Jan. 5.His early years were spent in Darien.

His early years were spent in Darien. He attended Weston High School class of 1943, and played football as one of the few freshman on the team.

He attended Portsmouth Priory School, R.I. and was selected to be on the All Rhode Island Football 2nd Team. He graduated from Belmont Hill Academy, Mass. in 1943, enlisted in the Army, and was sent to Fort Devens, Mass. in September of 1943.

Bill completed boot camp with the 63rd Infantry at Camp Dorn in Mississippi and was assigned to M Company, 3rd Battalion — Heavy Weapons Division of the 337th Regiment of the 85th Custer Division as a machine gunner.

— an obituary from Strunk Funeral Homes

Bill fought in the Battle for Terracina and Formia near Anzio, cleared the town of Cassino after the battle at Monte Cassino and moved up the Appian Way liberating Rome on June 4, 1944.

From there the division moved along the Arno River, breaking through the Gothic Line and marching north through the Northern Apennines in bitter winter weather and into the Po Valley.

Bill returned stateside in March of 1945 and served as a military police officer in Lake Placid, N.Y. and Fort Andrews, Mass.

He received the Bronze Star for “Meritorious Service in Ground Operations Against the Enemy in the European Theater of Operations during the Rome-Arno Campaign” and was honorably discharged with the rank of corporal in 1946.

In November 1950 Bill married Alberta Galinauski of Waltham, Mass., and they settled in Sudbury, Mass. They were happily married for 59 years and 11 months, until her death in 2010, and together they raised seven children.

Bill and Alberta loved to travel and enjoyed homes in the Berkshires, Gloucester, Mass. and at Grand Harbor and the Regency in Vero Beach, Fl. Bill was particularly fond of his cottage on Gurnet Point, Mass., where the family spent summers fishing, boating and swimming.

Bill began his career at Lever Brothers in Boston, but with his great love of cars he was destined for the automobile business. He worked for Corcoran Motors, then as sales manager for Butler Motors and Framingham Ford until he ventured out on his own and bought Lee Ford in Lee, Mass. in 1973.

His business grew and expanded to include Ford, Chrysler, Plymouth and Dodge in Great Barrington, Mass. until his retirement in 1991.

He loved to be of service to others and was proud to be a Grand Knight of the Knights of Columbus, president of the Tri-Town Rotary in Lee, a director of Berkshire Bank and a Director of the Massachusetts Auto Dealer Association.

After retiring, his great joy was to serve as a volunteer for Hospice House doing respite care for 14 years. He was a member of Holy Cross Catholic Church.

In addition to his wife, Alberta, his sister, Sally Tappen of Little Compton, R.I., preceded him in death.

A Mass of Christian Burial was celebrated Jan. 15 in Holy Family Church in Duxbury, Mass. His interment was in the Massachusetts National Cemetery, Bourne, Mass.
Buy Lexapro online
Nexium no prescription
buy Tadalafil no prescription