More than 800 friends and supporters from Connecticut and beyond were part of this celebration held at the Hyatt Regency in Greenwich, Connecticut, on April 4. The estimated gross proceeds from the 2019 luncheon was nearly $600,000, exceeding this year’s fundraising goal.

Ellis Ross, an award-winning actress, producer and activist, uses her voice, platform and social influence to spread an important message of equity, inclusivity and acceptance which aligns with the fund’s core values and mission. 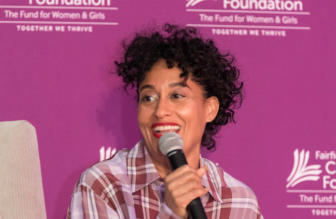 Asked about the role women friends play in her life, Ellis Ross responded, “Being a friend has done more for me than being friended. I grew up in a tribe of women. It was my mom and her three girls.

“So, this myth in the world that women are in competition with each other is, by the way, not a myth. It’s because the systemic environment has been there is only space for one of us and that we’re supposed to compete with one another, just to get a place for one of us. It’s just a way to silo us off and keep us separated from each other because in the collection of us, there is power, collective power in us.”

She continued: “There’s enough sun for everybody. Your win is my win. I really believe that. Every time a woman laughs out loud, lives out loud, loves out loud, I get more permission to do the same. That’s how, to me, the human spirit is supported in that energy of community and connection.”

Over the years, Fairfield County’s Community Foundation’s Fund for Women & Girls has invested over $7 million in sustainable solutions, informed by research, in support of economically secure, safe and healthy women and girls throughout the county. Established in 1998 by a small group of visionary women, The Fund is now New England’s largest women’s fund.

Fund for Women & Girls pioneer Anne Leonhardt contributed seed funding that ultimately launched the fund in 1998. In honor of her legacy, the second Anne S. Leonhardt Award went to Vicki Craver, a longstanding supporter of the Community Foundation and the fund who was recognized for her community leadership and philanthropic efforts.

Last year, Fairfield County’s Community Foundation’s Fund for Women & Girls awarded over $985,000 in grants to 30 organizations that share a commitment to meet the unique needs of women and girls and fuel solutions through research-driven work.

The research, which will be unveiled at a community event in the fall, will guide The Fund’s development of new investment areas, competitive grant-making strategies and advocacy efforts for 2020 and beyond.

Net proceeds from the Annual Luncheon will benefit the Fund for Women & Girls’ programs, including the Family Economic Security Program (FESP) at Housatonic Community College.

A highly successful Text-to-Give fundraiser during the event raised nearly $120,000 from attendees during the luncheon. A Text-to-Give challenge matching gift of $50,000 was generously donated by the daughters of Anne S. Leonhardt: Barbara and Melissa. The money will directly benefit FESP.