She was one of six Darien students who won recognition in the essay contest.

— an announcement from the DAR Good Wife’s River Chapter 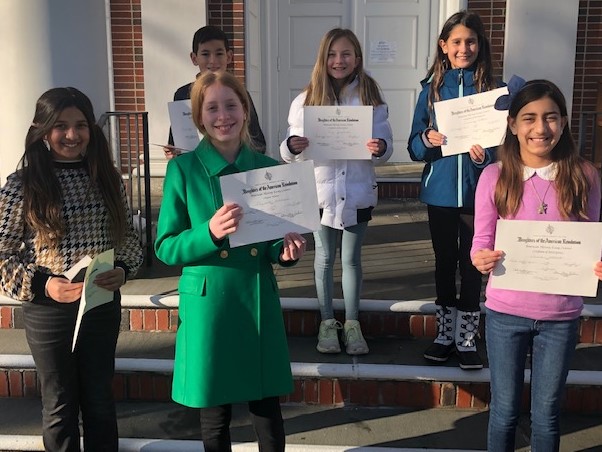 Students were asked to imagine they had lost a brother in World War I and were asked why it is important to remember those who gave their lives to serve our nation.

On Monday, Jan. 31, winners gathered on the steps of the Noroton Presbyterian Church to accept their DAR award certificates from Essay Contest Chairman Sandi MacPherson.

Good Wife’s River DAR Honorary Regent Karen Polett presented each winner with a gift certificate donated by Barrett Bookstore owner Sheila Daley. Parents and several DAR members attended the brief ceremony (which pre-COVID 19 was held as an indoor reception) for the winners and their teachers, administrators and families.

This contest is an annual event sponsored by the local DAR chapter. Winning essays go on to the state competition and state winners compete on the national level.

Darien students have won the state competition in two of the last six years.

For additional information or DAR applications, please contact the Regent Nicole Gorman. Membership in the NSDAR is open to any woman over the age of 18 who can trace her direct lineage to a male or female Patriot whose last act was to fight in or offer material aid to the cause of American Independence during the Revolutionary War.