Madeleine Murphy Pollock, a Darien and New Canaan resident for seven decades, has died at the age of 102. 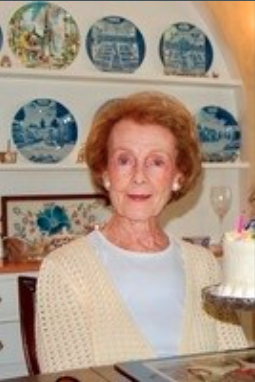 Madeleine Pollock, 102, recently died. Her funeral will be private.

Madeleine Pollock died of natural causes at her home on Daniel Island, South Carolina where she had relocated in 2017.

Mrs. Pollock was a member of the St. Thomas More Catholic church in Darien. She was also an active member of the Wee Burn Country Club, where she chaired the Ladies’ Golf Committee and enjoyed playing duplicate bridge.

She also dabbled in still life painting and faux finishing furniture and was a prolific crewel embroiderer, leaving behind a collection of valances, pillows and framed pieces. She was a keen follower of local and national politics, often opining on current events with a sense of humor to avoid offending.

Born in Rochester, New York, Madeleine was the daughter of the late Thomas Joseph and Mary Louise Murphy. Mrs. Pollock was a graduate of the Katherine Gibbs school of New York City.

She served with the Clubmobile Division of the American Red Cross in England and France during World War II and with the Army of Occupation in Germany.

After the war she had a varied career as Elizabeth Arden’s social secretary and later worked as an administrative assistant for various ad agencies. Her most opportune gig was teaching dance at Arthur Murray Studios where she taught her future husband, Ed Pollock how to dance.

Madeleine was predeceased by her husband of 58 years, Edwin Fithian Pollock, and her sisters Mrs. Jane Steinback, Mrs. Joyce Lewis and Mrs. Irene DeGarmo. She is survived by her daughter, Margaret Pollock Bondy of Mt. Pleasant, South Carolina and her granddaughter, Diana Bondy Leung of Atlantaa.

— an obituary from Hoyt Funeral Home on Legacy.com