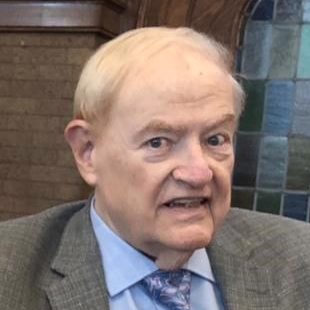 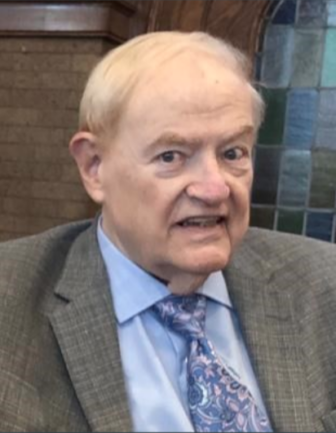 John Holland, 83, passed away on May 13. His interment will be private. A celebration of his life will take place at a later date.

Jack was born in Rochester on Feb. 3, 1937, one of four children of John and Anna Holland, and grew up in the city’s 19th Ward. He went to St. Monica’s for elementary school, then to Aquinas Institute, St. John Fisher College, and graduated from Niagara University. He served in the Army National Guard, and continued as a reservist.

Jack joined the Xerox Corporation, and spent his professional career there, which took the family from Rochester to California, Texas, and Connecticut as well as to London, returning to Darien. There Jack enjoyed weekends mowing the lawn, playing golf, and the company of his dogs Surrey and Murdock. After his retirement as vice president of finance for Americas Operations, he and Sue returned to Rochester to be closer to their extended family.

Jack and Sue loved to travel and made trips to Ryder Cup tournaments across the United States and Europe. Ireland and Spain were favorite destinations. The family enjoyed many Thanksgivings and ski weekends in Vermont. In retirement, they spent winters in Rancho Mirage, California, and wonderful summer weeks with their kids and grandkids on Seventh Lake in the Adirondacks.

Jack was an avid golfer, and he and Sue spent many days together with friends and family on the links. He had two holes-in-one, and was a member of Oak Hill Country Club for 59 years (including active membership in the Hillcrest Investment Club), and a long-time member of the Country Club of Darien.

Jack also had a profound faith in God which he shared with his family, and attended daily Mass for many years. He was a trustee of St. Thomas More Church in Darien and a volunteer at St. Louis Church in Pittsford, counting the weekly contributions. Jack’s dedication to his faith and his church community was recognized when he was made an Equestrian Knight of the Holy Sepulchre.

Jack supported Aquinas as a class agent and was a member of the Board of Advisors at Niagara University.

He is survived by his wife, Suzanne; his children, John J. (Kristin) Holland III of Fairfield, Mary Sue (Frank) Dehn of Pittsford, Patricia Holland of Scottsdale, Arizona, and Ann Marie (Greg) Rehm of Bedford, New Hampshire; and his nine grandchildren, Erin, Kelly and JP Holland, Molly, Caroline, Michael and Brendan Dehn, and Marley and Kate Rehm; as well as his siblings, Mary Kay Mahar, Rev. Daniel F. Holland, and Ann Ryan. Also surviving are his sisters-in-law, Patricia Foley Thaney and Eileen Thaney Cubitt (Glen); as well as many nieces, nephews and their families.

He is predeceased by his parents, his in-laws, Elmer and Madeleine Thaney; his friends and brothers-in-law, Raymond Mahar, Alan Ryan, Bill Thaney, and Ralph Murphy; and sister-in-law, Mary Lou Murphy.

There will be a private interment at Holy Sepulchre Cemetery. When possible, we will gather for a celebration of Jack’s life. In the meantime, please take a few minutes and upload a video message with a memory of Jack or a photo to https://www.tribute.co/jack-holland/.

In lieu of other gifts, please consider a donation in his memory to Aquinas Institute, 1127 Dewey Avenue, Rochester NY 13613, or to Niagara University Purple Eagles Emergency Relief Fund, Office of Institutional Advancement, P.O. Box 2008, Niagara University, NY 14109-2008. Please indicate that the gift is in Jack’s memory.

— an obituary from Anthony Funeral and Cremation Chapels, where online condolences may be left